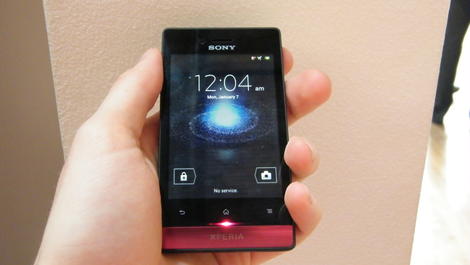 Ensuring a complete range of phones from the low to high-end, the Sony Xperia Miro arrives towards the bottom of Sony's handset offering.

Due to arrive in the third quarter of the year along side the bottom of the range Xperia Tipo, the Miro is set to come in between £150-£200 SIM free, and free on 24 month contracts starting at around £15 per month.

This price point pits the Xperia Miro against the likes of the HTC Desire C, BlackBerry Curve 9320 and Orange San Diego – some tough competition in the increasingly-popular budget market.

Specs-wise, the Sony Xperia Miro finds itself in-between its rivals, offering more bang for your buck than the Desire C, but falling down when compared to the San Diego in both power and screen quality.

The Miro is another simply designed handset from Sony, with a clean and uncluttered appearance. On the front you've got three touch-sensitive buttons below the display, and a speaker grille and front-facing camera above it.

There is an angled coloured strip located at the base of the front of the Miro, which comes in a choice of colours, Silver, Black, Pink and Gold.

Although the front the handset is black no matter what colour strip you opt for, the side and rear of the Xperia Miro will either be Black or White – depending on which colour strip you choose.

The case of the Miro is the standard plastic affair, which feels pretty solid in the hand, and with it clocking in a 9.9mm in depth, 59.4mm in width and 113mm in height, it's comfortable to hold as well.

At 110g, the Sony Xperia Miro finds itself at a happy weight, providing enough to convince you it's a well made handset, but not too much as to annoy your pocket.

On top you'll find a 3.5mm headphone jack and a tiny power/lock key which, while looking nice, was a little too small for our liking, making it hard to hit - especially when held in a left hand.

At the top of the right side of the Xperia Miro you'll find a volume rocker switch, which also sports the miniature styling of the power/lock button – and once again we'd have preferred it if Sony had made this bigger, as it was sometimes hard to hit with our cumbersome thumbs.

On the left is a microUSB port and the base just sports a dent in the chassis, allowing you to pop off the back cover, and a hole to attach a lanyard.

Round the back you're greeted by a 5MP camera flanked by a single LED flash, and there's a centralised speaker towards the bottom, just below the Xperia and old Sony Ericsson logos.

Whip the plastic back off the Miro and you'll see it takes a standard SIM card (none of that microSIM business here) as well as a microSD card up to 32GB in size, and there's a removable 1,460mAh battery.

What you don't see when you first pick up the Xperia Miro is a coloured LED light between the bottom strip and touch buttons, which glows different colours depending on various actions.

Press the power/lock key and the screen, and coloured LED wake – with our handset glowing pink, as that was the preset theme – but you can change this to white, blue, turquoise, green, gold, red or purple... whatever takes your fancy really.

The Xperia Miro comes packing Android Ice Cream Sandwich, a welcome relief at it looks like manufacturers are finally making the transition over from Gingerbread.

Sony, like many Android handset manufacturers these days, has stuck its own overlay on top of ICS, which harks back to the Timescape overlay on Sony Ericsson handsets, albeit smarter and more organised.

The 800MHz processor does a good job of running Ice Cream Sandwich, with no lag or slowdown experienced in our brief test, but it lacks the fluidity of the more highly powered San Diego – which really does feel slick under hand, but bear in mind that's only running Gingerbread at the moment.

The touchscreen was responsive to our pokes and prods, but we did notice some resistance as we dragged our finger between the five home screens and app lists – slightly detracting from the otherwise acceptable user experience.

Sony has also tweaked the keyboard, making the keys slightly taller than the stock Android offering and it provides a relatively decent typing experience on the 3.5-inch display.

The keyboard comes with a handy walk-through guide, allowing users to set it up in a way which suits their writing style – customization we were impressed with and a wide range of options to suit most people.

Swype has also been included on the Xperia Miro and if you want a bit more space while typing, turn the handset landscape to get a larger layout.

According to Sony, the Xperia Miro is "made to enjoy Facebook", with that trusty LED light on the front flashing FB blue everytime you get a notification from the app.

This, along with the inclusion of Sony's xLoud technology, which increases the volume of the rear speaker by up to 30% without distorting playback, shows that the Xperia Miro is targeted at the youth market.

The front facing VGA camera will allow you to make video calls with your buds, and you can also use it to take snaps and record video, but quality will be far from decent.

The 5MP camera on back of the Miro offers up a better shooting experience, and Sony has provided a relatively decent array of options within the app – although the Desire C and San Diego sport slightly more feature-packed camera applications.

Auto-focus means there's a second or so delay between pressing the shutter and the Xperia Miro taking a shot – but this can be turned off if you want a more rapid-fire approach, although you may end up with blurred photos.

Sony has also implemented a quick shot function from the home screen. Drag the unlock bar in the opposite direction and the Xperia Miro will open the camera app and take a photo automatically – the whole system only takes a second, making it a potentially handy feature.

The Sony Xperia Miro also offers a 4x digital zoom along with that LED flash, to help you out in low light.

Video recording is available, but sadly only at VGA quality, a little disappointing considering the similarly priced San Diego can shoot in full HD.

You can zoom while recording, a feature we don't see available on enough phones, but the LED light needs to be turned on/off before hitting record, as it cannot be toggled once you've hit that red button.

As you'd expect the Sony Xperia Miro comes with Wi-Fi b/g/n and hotspot capabilities, Wi-Fi, and A-GPS, as well as DLNA streaming support. There's no NFC on board here, with Sony leaving that to its higher end handsets for now.

The Sony Xperia Miro provides a run of the mill Android 4.0 experience at the middle to low end of the market, and while it's not going to set the world alight, it does provide a decent array of functions and features, wrapped in a usable package.

The Orange San Diego does trump the Miro in most respects, but we'd expect Sony to price its handset slightly below the San Diego's £200 asking price – which will give consumers food for thought when it comes to deciding which one to buy.