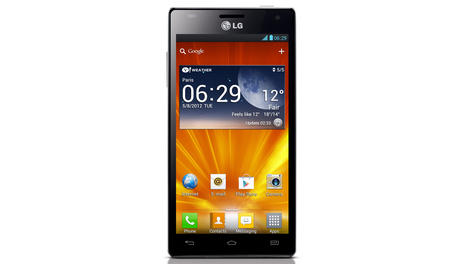 We've got the LG Optimus 4X HD in and we're putting it through our full, in-depth review process. In the meantime we've updated the hands on, just for you. Yep, you.

Arriving fashionably late to the party, can the LG Optimus 4X HD, the firm's first attempt at a quad-core phone, offer anything to set it apart from the Samsung Galaxy S3 and HTC One X?

Launched alongside the four core toting One X at MWC 2012, it's taken LG a little while to get the handset out, with an expected arrival date of August now on the cards.

As it's set to go up against the Galaxy S3 and One X, as well as the Huawei Ascend D1 Q when that finally sees the light of day, you can expect the Optimus 4X HD to carry a price tag in the region of £500 (around $780) SIM-free when it does arrive.

Approach the LG Optimus 4X HD and you do feel that you are looking at a premium phone, with the dual metal rims running around the circumference, sandwiching prism detailing which is all part of LG's new signature design.

The textured back sits nicely in the hand and the tapered sides make the slim (8.9mm) phone feel even thinner, giving the illusion that the Optimus 4X HD is not a wide (68.1mm) as it actually is.

Weighing in at 133g the Optimus 4X HD is similar in weight to the likes of the iPhone 4S, One X and Galaxy S3 – providing an even distribution and comfortable hold in the hand.

The case is made of plastic, which keeps the weight of the handset down, but build quality does not suffer and the Optimus 4X HD feels solid, so not to detract from the premium look.

On the left hand side there's a volume rocker switch which gets the prism design flare, easy enough to hit and the textured finished ensures your finger doesn't slip.

On top you'll find a 3.5mm headphone jack and the power/lock key which is also easy to hit when holding the LG Optimus 4X HD in one hand.

The right side of the handset is devoid of buttons, leaving you to admire the stretch of uninterrupted prisms, and on the bottom the only features of note are the microUSB port and microphone pin hole.

You can see signs that Ice Cream Sandwich is on board straight away with the three touch buttons located at the bottom of the screen touting the Android 4.0 design.

As we've already mentioned the LG Optimus 4X HD comes running Ice Cream Sandwich, which isn't the latest version of Android, that accolade now sits with Jelly Bean, but that's only available on a couple of devices at the moment, so ICS is good enough.

Press the power/lock button on the top of the Optimus 4X HD and the screen awakens, bright and crisp, and we're greeted with LG's way of unlocking the Ice Cream Sandwich interface.

Press in the centre of the screen and then drag in any direction to increase a peep-hole of the home screen until wide enough for the animation to pop and unlock.

The touchscreen is very responsive and had no trouble picking up even our lighter gestures - the touch sensitive keys below the screen weren't quite as alert, as we sometimes had to hit them a couple of times.

The power of the quad-core processor is obvious as you skip through the home screens and app trays – although there was a couple of times where it would stall when navigating from the homescreen to the application list, lag we haven't experienced on the One X or Galaxy S3.

LG has added its own skin to Ice Cream Sandwich making it easy to update your screens with whatever widgets, apps and backgrounds take your fancy.

LG has done a pretty good job with its Android overlay with some nice touches including the menus which it has brightened up and added colour to.

It has also grouped various options into sub categories within the menus, allowing users to navigate to what they want a lot quicker.

Pull down the notifications bar at the top and you'll find LG has implemented some handy settings toggles, a la Samsung's TouchWiz interface, including Wi-Fi, Bluetooth, NFC, GPS and Volume.

Even more handily, you can edit the order and number of toggles which appear here, so you can fine tune it to show only your most used features.

You get a decent array of seven home screens with the Optmius 4X HD and editing these is simple – press and hold on a clear space on any screen and an options menu will pop up letting you add a host of widgets, apps and shortcuts to the display.

As we've come to expect from top end smartphones these days, you can link a whole host of accounts on the Optimus 4X HD, including Google, Facebook and Twitter - with the handset pulling in contacts from all networks and doing a pretty good job of matching them up - although we did have to manually join some of our friends to their Facebook profiles.

The keyboard is a pretty standard affair, which suffices for general use, but anyone who spends a lot of time typing, or is a proud owner of larger digits, may want to head over to Google Play to download an alternative.

And if you don't fancy the default browser, head over to Google Play where you'll be spoilt for choice – plus thanks to the Optimus 4X HD running ICS, the Google Chrome app can be downloaded, if you fancy a bit of that.

You're able to watch full HD video with ease on the Optimus 4X HD thanks to that large True HD IPS screen and we saw how you're seamlessly able to zoom in and out of video while it is playing, without any slow down.

Once zoomed in you can then pan round the video as it continues to play as normal, which is very impressive and all thanks to the quad-core processor.

The other video related feature we were shown was the ability to the speed up and slow down the rate of video playback, again on the fly as the footage plays and the processor was able to cope with it no problem.

Video zooming and speed regulation are two of what LG is promising to be eight new, unique user experiences which will feature on the Optimus 4X HD when it finally ships this year.

The version we got our hands on was a development model which was missing some of the additional experiences – but now we've got the review unit in we'll be able to provide more detail in our forthcoming in-depth review.

There's a dedicated media centre application on the Optimus 4X HD, which gives you direct access to your music, videos and photos on the device, meaning you just need the one app instead of three.

There's also a FM radio application, if you fancy a more traditional way of listening to music, but you'll need to plug in a set of headphones, as they act as the antenna.

We were shown a benchmarking test done via Quadrant which showed the Optimus 4X HD to be twice as fast as the Samsung Galaxy Nexus – now that's blisteringly quick!

We posed the question, how does the quad-core processor compare to a dual-core in terms of actual user experience and the helpful chaps at the LG stand quickly hooked up a quad and dual core device to a couple of HD monitors and ran the same Nvidia graphics test (an illuminated ball rolling round a circus) to provide us with a side by side comparison.

It was clear to see that the quad-core Optimus 4X HD was able to render the movement and changing light conditions far more effectively producing smooth and defined results compared to the more grainy visuals produced by the dual-core phone.

The LG Optimus 4X HD will allow you to convert 2D games into 3D, as long as the handset is plugged into a 3D capable TV. Want Angry Birds in 3D on a 50-inch screen? Then step this way.

Although boasting the quad-core power we did find some apps were a little slow to open, such as the camera. We raised this issue and were assured that it was purely due to the handset still being in development and that the lightening speed would be seen throughout on the finial version.

The 8MP camera is easy to use with a familiar Android feel to the layout and settings menus. There are plenty of options to tweak your images from effects and scene modes to ISO and brightness adjustments.

Shutter speed was pleasantly quick (less than a second) and the auto focus, tap to focus and LED flash allowed us to take pleasing photos of the LG booth.

Video recording is just as easy allowing you to capture full HD (1080p) footage and with the ability to stick a microSD card of up to 64GB inside the Optimus 4X HD, you'll have plenty of storage for any epic films you may have in mind.

The LG Optimus 4X HD certainly has some neat tricks up its sleeve and it will be interesting to see how it shapes up in our full, in-depth review against the likes of the HTC One X and Samsung Galaxy S3.

From our brief time with the phone so far, the Optimus 4X HD looks like a perfectly capable handset, with a style which will appeal to some people and enough power to guarantee its future for at least the next couple of years.

We're not sure if it's quite as desirable as its quad-core rivals, an early hints of some slight lag do put a slight downer on a phone which boasts such powerful innards – we hope this will be ironed out before launch.

Keep an eye out for our full LG Optimus 4X HD review, which will be available on the site soon. In the meantime, why not check out the competition with our HTC One X review and Samsung Galaxy S3 review?