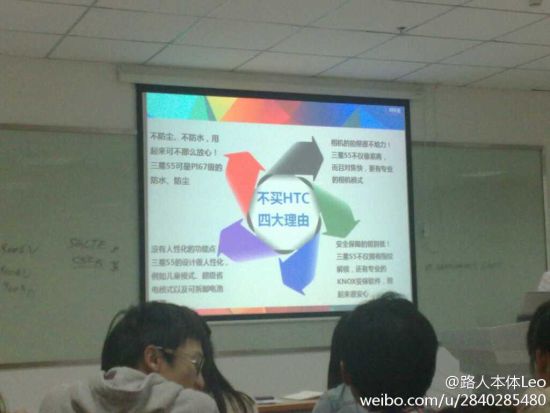 It’s not surprising that Samsung thinks their flagship, the Galaxy S 5, is more superior than the HTC One (M8). We haven’t completed our review of either phone, but there is a pretty good chance that the media is going to side with HTC on this. The Galaxy S 5 will launch globally next week and training materials have leaked showing why the Galaxy S 5 is a better phone, at least according to Samsung.

HTC’s claim to fame has been the metal design, but as I always say, beauty is only skin deep. Whether you are a Samsung fan or an HTC fan, Samsung does make a decent case as to why consumers should choose the GS5.

The first is that the GS5 is waterproof and dustproof. The GS5 is IP67 certified vs IPX3 for the HTC One (M8). Samsung also thinks they have a better camera with quicker focus, a lot more megapixels, and is “more professional.” Now a lot of people aren’t concerned with security as much, but the GS5 does have KNOX, which is good enough for the federal government. The GS5 also has a fingerprint scanner, but we still don’t know how well it works. Lastly, Samsung argues their phone is more user-friendly, has a removable battery, and a childproof feature. The childproof feature doesn’t seem like an advantage since HTC does have Kids Mode, which is similar to what the GS5 has.

The bottomline is that Samsung is going to sell a lot of phones, and HTC is only trying to put a little dent into Samsung’s market share. Each phone has plusses and minuses. Neither is all great or bad, and in about 6 months we will know what consumers decided.

Come comment on this article: Here’s why Samsung thinks the Galaxy S 5 is more superior than the HTC One (M8)