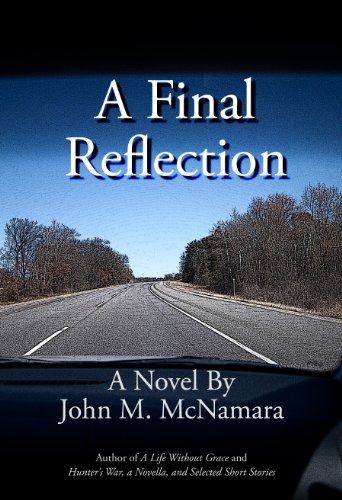 When a Chicago attorney receives a terminal diagnosis, he ignores his wife’s pleas and embarks on a solitary odyssey, visiting people who have influenced his life, to thank them and to say goodbye. For 30 days and 6,000 miles he drives through the Western U.S., each night making entries in a journal about the day’s events, chronicling the trip and revealing to us how it morphs from the purpose he had intended into something else entirely.

He encounters qualities in his friends he had not seen before, and through these revelations, aspects of his own character are revealed to him. He discovers goodbyes are rarely surgical and the precise amputation of his relationships eludes him. No one seems willing to accept his visit as a final farewell.

A FINAL REFLECTION affords glimpses into the perceptions and intuitions of a middle-aged man laboring under a death sentence. He has yet to suffer any symptoms of the disease, so his grip on the reality of its progression remains tenuous. One friend tells him to accept the time allowed for his trip as a gift to be used wisely. Another counsels him to kill off his past and revel in the moment, seizing as many moments as he can eke out of his aborted future. Throughout each day of the journey, his love for his wife remains an unassailable constant…he confides in her nearly every night. At a crucial juncture in the trip, he realizes he no longer moves away from home, but toward it. Toward his wife.

5-Star Amazon Review
“I enjoyed this book and related easily to the story. Makes you think about who would you go visit if you knew you were dying. John McNamara can write!!”
“…The writing is so explicit, it’s almost impossible to think of it as a work of fiction.”