The Hisense A6200 is the company’s latest mid-range model, and a quick glance at the specs suggests it offers everything you would expect from a modern 4K TV: there’s a direct LED backlight, support for High Dynamic Range (HDR), a Smart TV platform, and an extensive selection of video streaming services.

If the Hisense 50A6200 can deliver a performance that complements its specs, then at a cost of £379 we’ll have a serious bargain on our hands.

The Hisense A6200 isn’t going to win any design awards, but at this end of the market no-one is expecting miracles. What you do get is a functional-looking TV that, thanks to economies-of-scale, is well put together. The chassis is constructed of black plastic, while the matching bezel has a brushed metal effect to offset the general minimalism of the design.

The TV is relatively deep, measuring 35mm at the top and widening out to 73mm at the base where the electronics, connections and speakers are all housed. The extra depth is required to house the backlight, which is composed of LEDs located directly behind the panel. It’s a cosmetic trade-off, but the benefits of a direct backlight outweigh the edge lighting used by ultra-thin TVs.

The A6200 sits on a pair of feet that match the rest of the design, and are located at either end of the screen. That means you’re going to need a surface at least 980mm wide on which to place the TV. Alternatively you can wall mount the A6200, and there are fixings for a 200 x 200mm VESA bracket on the back of the panel.

The connections are what you’d expect at this price point, with two HDMI inputs at the side and one HDMI input facing downwards. There are two USB ports, along with a terrestrial and satellite tuner, a CI slot, an optical digital output, composite video input, and an analogue input. There’s also a LAN port and built-in WiFi.

The A6200 includes Hisense’s standard remote, which is decidedly old-school in its appearance but includes all the buttons you’ll need to control the TV. The layout is intuitive, the controller is comfortable to hold, and it’s easy to use with one hand.

Design TL;DR: The A6200 keeps things simple and functional, thanks to a minimalist design, a solid set of connections, and a basic but effective remote control. 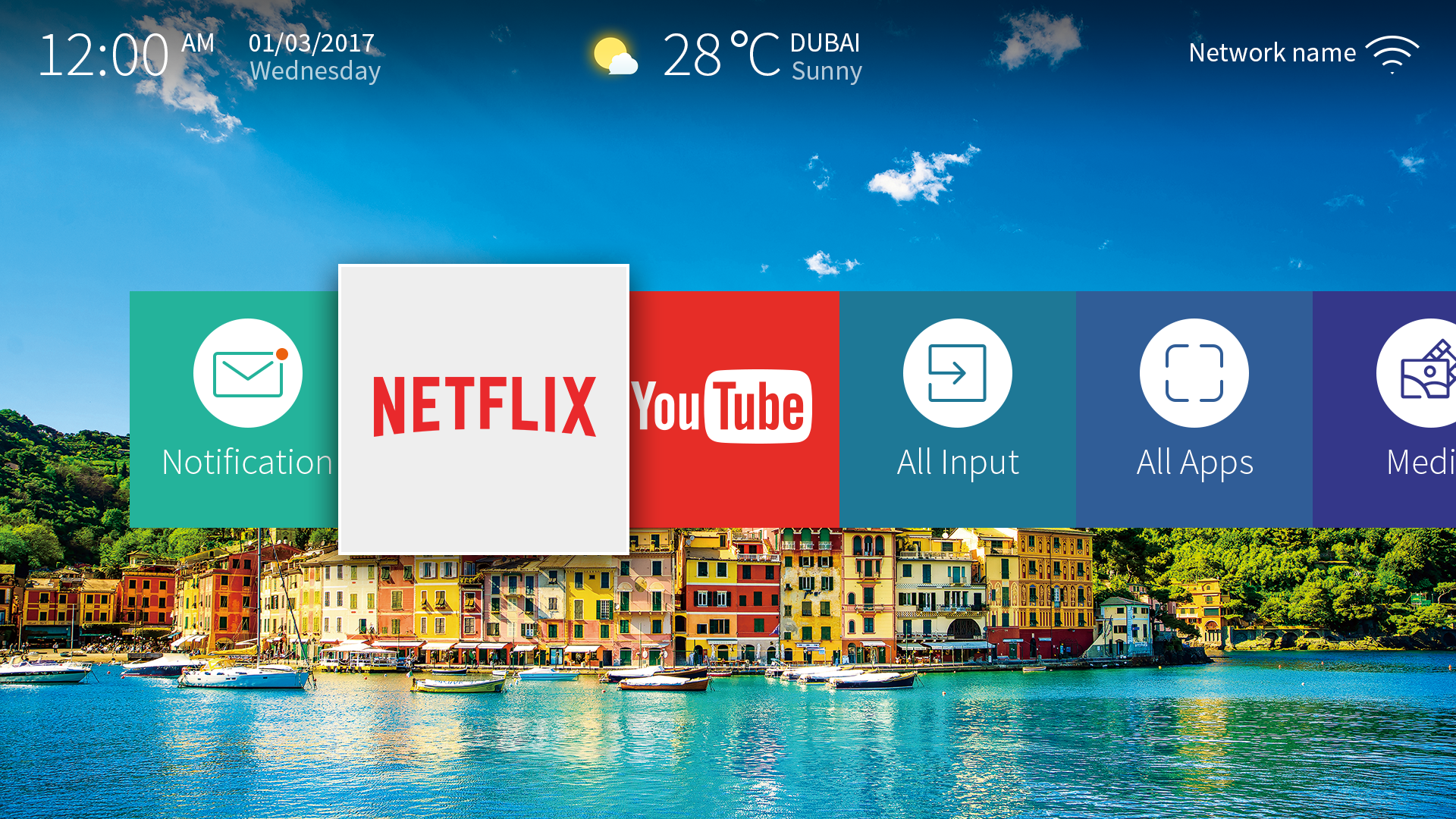 Hisense use an operating system developed in-house, and the company has christened it VIDAA U. This proprietary smart platform might not be as sophisticated as LG’s WebOS or Samsung’s Smart Q but by taking a simpler – if not old-fashioned – approach, interaction is more intuitive and content easier to find.

The problem with flashier Smart TV systems is that they inundate you with so much choice that you often can’t decide what to watch or even where to find it. With VIDAA U, there’s a simple Home page that provides access to Freeview Play, Apps, Inputs, and any connected Media.

The smart platform supports DLNA, allowing you to access content on your home network, which you can do using the Media option in the Home menu. The media player can handle video, music and photos, with support for a wide range of file formats.

Crucially the smart platform includes almost all the video streaming services that you could want, such as Netflix, Amazon, YouTube, and Rakuten. The first three support 4K and HDR, while the BBC iPlayer app supports 4K and Hybrid Log Gamma (HLG). You can also access Freeview Play, Netflix, Amazon Prime, and YouTube directly using dedicated buttons on the remote.

Smart TV TL;DR: Hisense’s VIDAA U smart platform isn’t as flash as some of the competition, but the interface is simple and easy to use with all of the main features you need.

4K and HDR may be getting all the attention these days, but the reality is that the majority of your viewing will remain high definition and Standard Dynamic Range (SDR) for years to come. So a display’s performance in this area is crucial, particularly when dealing with budget TVs, where the picture quality can often be compromised to reach a specific price point.

There are no such worries with the Hisense A6200. The company has clearly learnt from the improvements in image quality it has made over the last few years, and applied those lessons throughout its entire range. The result is a budget TV that includes many of the same picture features found on models higher up the range.

The benefit of LEDs directly behind the panel are immediately apparent, with an even backlight that’s free of clouding. There’s no local dimming, but the native black levels are very good thanks to the use of a VA (Vertical Alignment) panel. These factors all combine to create a solid bedrock for the Hisense A6200’s display.

Where the A6200 really impresses is its colour accuracy, which in the Cinema Day and Night modes is very close to the industry standards. There’s a comprehensive set of calibration controls included in the menus, but clearly at this price point no-one is going to pay for a professional calibration.

So it’s good to know that even without one, the Hisense is incredibly accurate. Naturally there are other picture modes for those who prefer their images brighter or more saturated, but if you want to watch TV shows and movies as the content creators intended, then the A6200 has got you covered.

The image processing is also solid, with good upscaling of HD content to match the 4K panel. It isn’t quite as refined as some of the competition, but it gets the job done. The motion handling is also good, which is just as well because there are no motion enhancement features on the A6200.

There’s no game mode either, but interestingly that doesn’t really matter. The A6200 has a 24ms input lag, making it a great choice for gamers. If you’re big into HD/SDR gaming, then this is an ideal choice – with the added bonus of the LCD panel being immune to image retention and screen burn.

HD/SDR Performance TL;DR: A solid and surprisingly accurate HD/SDR picture makes the A6200 a real winner at this price point. So far so good – and if you’re wondering where the catch is, we’re about to get there. While the Hisense A6200 delivers an excellent performance with HD/SDR content, it struggles when it comes to HDR.

First things first, there’s nothing wrong with the 4K panel in the A6200. When watching 4K Blu-rays like Blade Runner 2049, or streaming 4K shows like Iron Fist and Jack Ryan, all the fine detail is there on the screen. It’s no surprise to discover that the panel is 8-bit+FRC (frame rate control) rather than 10-bit, but it’s highly unlikely you’d ever actually notice the difference.

So the problem isn’t with 4K: the issue lies with HDR. The A6200 can produce a peak brightness of around 200nits, and when you consider that HDR content is graded at 1,000 or 4,000nits, you can probably see the problem. The Hisense’s native colors aren’t as saturated as HDR content either, so it also can’t reproduce all the necessary colors.

The Hisense A6200 can tone-map the HDR content, which basically means it takes the original image and fits it to the brightness and colour capabilities of the TV. So you still get a nice image, but you’re not getting all the brightness in the peak highlights, or the nuances in the colours that a higher-end TV can deliver.

Trying to squeeze 1,000 or 4,000 nits content into a display only capable of 200nits is a tough ask for even the best tone-mapping algorithm, so unsurprisingly the A6200 struggles. There was obvious clipping, i.e. loss of detail in the bright parts of the image when watching HDR content, and the colours felt muted.

So if HDR is really important, then this is probably not the TV for you. However the reality is that any TV at this price point is going to struggle with HDR. So if it's a deal-breaker, you really need to increase your budget and look for a more capable model further up the range.

However if your budget is tight, or HDR isn’t that big a deal, then you really won’t find a better TV at this price, and any weaknesses in one area are more than offset by strengths in others.

4K/HDR Performance TL;DR: The Hisense A6200 might accept an HDR signal, but limitations in its brightness and colour make this model an HDR TV in name only. 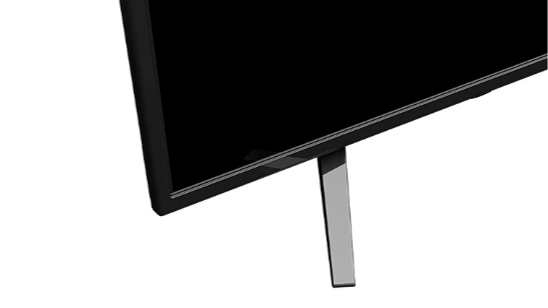 The deep chassis on the Hisense A6200 is primarily due to the direct LED backlight, but it does have a knock-on benefit. There’s more space in the TV for larger speakers, and the bigger the speaker, the better the sound.

As a result, the A6200 actually sounds very good for a 50-inch budget TV, despite the use of a pair of downward-firing drivers. There’s 7W of amplification for each speaker, and while that might not sound like a lot, it’s sufficient for most TV viewing.

The A6200 isn’t going to deliver a big room-filling sound, and if you push the volume too high it will start to crack. However it does produce a balanced and open sound with a decent mid-range. The bass is understandably lacking but dialogue remains clear and music has a nice sense of stereo separation.

If you’re a fan of big blockbuster movies, then you should consider investing in a soundbar, but for most general TV viewing the A6200 is more than capable of delivering a decent and enjoyable audio experience.

Sound TL;DR: The sound quality is surprisingly good for a modern TV, with the deeper chassis giving the speakers more room to breathe.

Other panels to ponder

If you’re looking for a 50-inch 4K TV costing less than £400 but which can also deliver a good picture, then your options are very limited. There are plenty of cheap TVs available, but most are frankly unwatchable.

However, if you can stretch your budget to £449 then the Philips 50PUS6753 is definitely worth considering. It not only delivers an excellent picture, but its design boasts plenty of European flair, with an ultra-slim frame and an aluminium coloured bezel and stand.

The 6753 also includes Ambilight, a feature unique to Philips that essentially puts lights on the rear of the TV to create a more enjoyable viewing experience. There’s support for HDR, extensive image processing features, and even micro dimming for an improved contrast performance.

The Philips has an identical set of connections and includes Philips’s SAPHI smart platform, which also uses quad-core processing and includes access to Freeview Play, Netflix, YouTube and more. There’s no question the Hisense A6200 offers exceptional value, but the Philips 6753 gives it a serious run for its money.

The Hisense H50A6200 delivers a combination of performance and features that is hard to believe at a price of only £379. Hisense’s experience and scale as one of the world’s largest TV manufacturers allows it to build a 4K TV that, while cheap, doesn’t compromise on picture quality.

The design is functional, the build quality solid, and the smart platform simple but effective. The HD/SDR performance is particularly impressive, with an unusually accurate picture at this price point. Unfortunately the HDR performance is limited, but that’s par for the course when dealing with budget TVs.