How to Get Started in POU: The First Smash - Plus 8 Essential Tips

You could be forgiven for assuming that POU: The First Smash is a clicker. It has all the telltale signs, including a simple input mechanic, short stages, dozen of achievements, and a comprehensive economy of upgrades, consumable power-ups, and a currency called Chi.

But there’s one crucial difference. While clickers place the emphasis on upgrade trees and unlocking cool stuff, relegating the action to undemanding interludes, POU: The First Smash is hard as nails and requires supernatural gaming abilities.

This guide will give you a grounding in the game’s systems, so that you can maximise your chances with the best equipment and spells. We’ll throw in a few gameplay tips, too.

But after that you’re on your own. 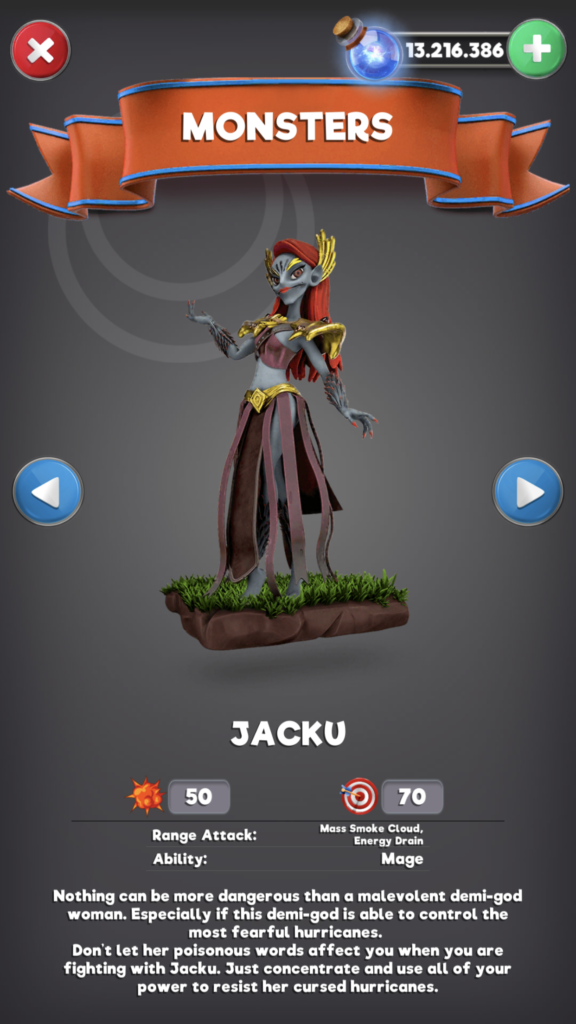 There are numerous ways to upgrade in POU: The First Smash.

Skills: These are permanent abilities, though they work on a timer. For example, deploying a Terra Strike clears the screen of enemies (and leaves humans intact), but it takes 50 seconds to recharge. That means you’ll probably only get to use it once per round.

You can upgrade your skills with Chi. This reduces the duration of the cooldown timer, from 50, to 40, to 30. 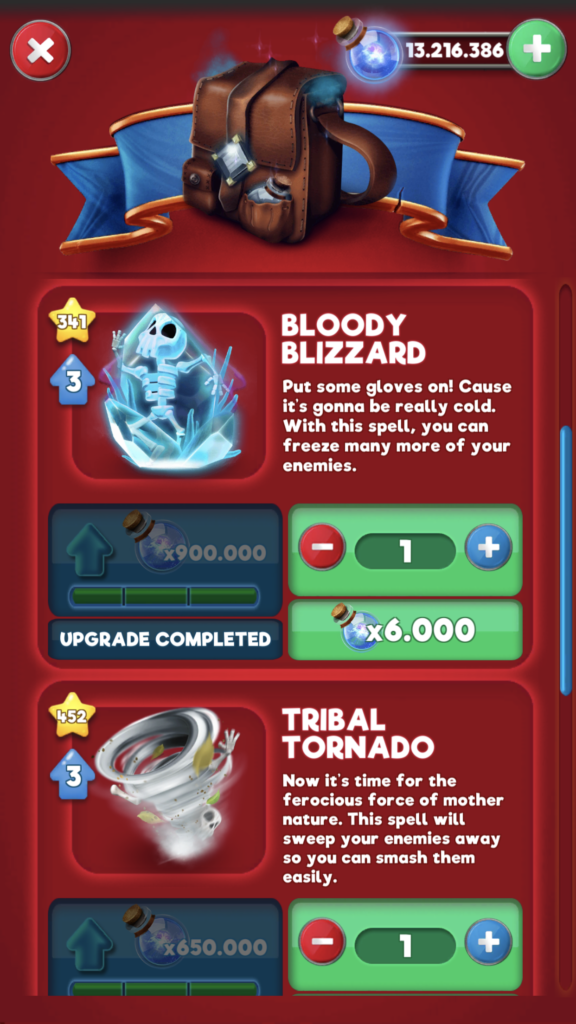 Spells: These are like skills, but consumable rather than rechargeable, and they don’t come with a cooldown timer.

They include power-ups that blow up the monsters near the bottom of the screen, send a tornado into the battlefield to hold back the oncoming army, and restore a little bit of your health. Many more unlock as you level-up.

Because spells don’t come with a cooldown timer, you can use them as many times as you like. The rub is that you have to buy them with Chi, and they’re not cheap. You can upgrade skills too, but this is even more expensive.

Aura: This is basically your starting energy. For a certain amount of Chi you can upgrade your Aura so that you start with 125 health, and for even greater sums you can upgrade it further.

Chi: There are three different ways to obtain Chi. One, you earn it in battle. Two, you earn it by completing achievements such as smashing 100 Deegos, upgrading your shield, and so on. Three, you can buy it in the shop. 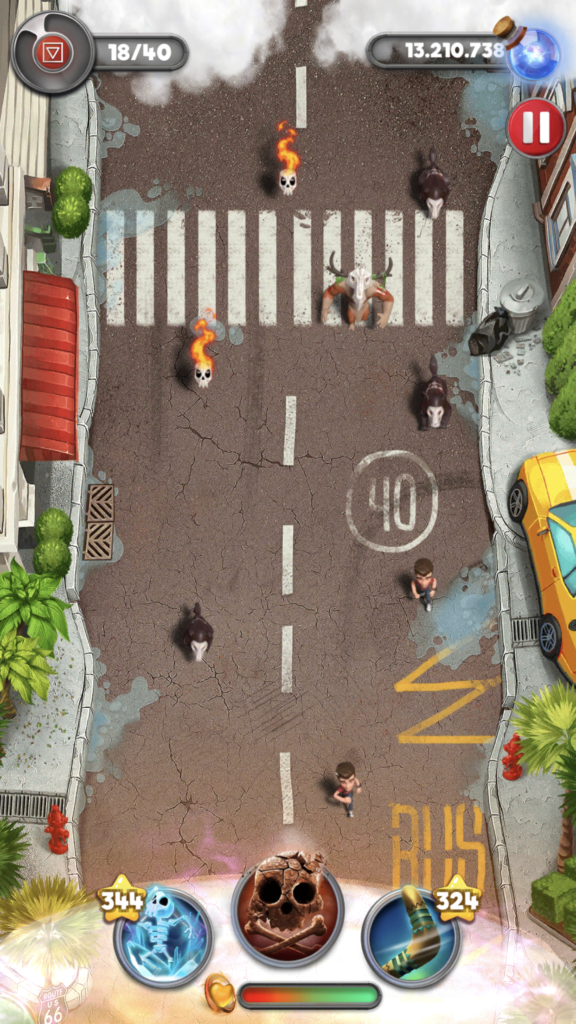 When you first start playing POU: The First Smash, the temptation is to start mashing the screen. The monsters appear in such great numbers that daintily picking them off or trying to kill them with Guitar Hero-esque multi-tap pattern-spotting efficiency seems impossible.

However, you’ll soon realise that mashing doesn’t work either — particularly when the game starts dropping humans into the mix. Kill one of these bystanders and it’s game over.

In fact, you’ll need to vary your approach. Sometimes a single finger is all you need. Sometimes you need to do a bit of digital hopscotch. And, yes, from time to time you need to get mashing — but always methodically.

2. Each monster requires its own approach

There are around fifty different monsters in POU: The First Smash, and they all behave in slightly different ways. The bullish Deego Chatan charges towards you for example, swinging his rocks, while the skeletal Ogima Motega stands back and fires arrows at you.

To excel in battle, you need to learn which enemies to pick off first.

3. Save your tricks for the big waves

Stages in POU: The First Smash get tricky fast. When the first seemingly unmanageable wave of monsters swarms down the screen it’s easy to panic and deploy your Terra Strike or smash out a Colossal Cluster, but it’s a terrible idea to do this too early.

After all, there are many more waves coming, generally more difficult than the first, and you won’t stand a chance if your Terra Strike is still recharging and you’ve used up all your spells.

The in-game economy in POU: The First Smash dictates that you’re never going to be wealthy when it comes to spells.

Yes, you can visit the shop and splash out an admittedly reasonable $0.99 on a good amount of Chi, or $1.99 on a starter pack containing Chi and 40 each of the three starter spells (or one of the many other IAPs on offer), but eventually anything you acquire in this way will be spent and you’ll be left earning Chi from battles and rewards.

The problem is, the amount of Chi you earn for finishing a battle is relatively small — realistically, you can afford to use one, maybe two spells in a round without going into the red, so it’s best to just give up rather than spend more than that.

5. Just give up if you die early

There are many ways to prolong an attempt at POU: The First Smash. You can use up spells, deploy your skills, and either spend Chi or watch a video to be reincarnated where you died, but it’s not always worth it.

Far be it from us to discourage you from dreaming of great victories against impossible odds, but if you find yourself being wiped out a few seconds into a round, do yourself a favour and just restart.

Before starting a stage, POU: The First Smash will offer you a shield. This is the kind of free-to-play pop-up that you’re almost certainly primed to ignore, but it’s well worth grabbing a shield before heading into battle.

The basic and advanced shields are prohibitively expensive, and arguably not worth what they cost, but you can obtain the deluxe extreme shield by watching a video. Do yourself a favour.

7. Check out the Survival mode

There’s also the Survival mode, which opens after completing every 20th level in each Chakra. In this you have the chance to gain an extra amount of Chi for continuing the game more easily. You can also see how you compare to other players.

It’s also worth noting that POU: The First Smash offers daily rewards for playing the game multiple days in a row.

We get it. Watching trailers for other games is not necessarily your idea of a good time. But POU: The First Smash is tough, and you don’t naturally accumulate enough Chi to offset this difficulty, so 30 seconds of video is a small price to pay.

In particular, it’s worth watching videos to acquire an extreme shield before each battle. And whenever you need to be reincarnated during a battle, which is always, 30 seconds of inconvenience is an infinitely more attractive price than shelling out a large amount of Chi.

Put these tips to the test by downloading POU: The First Smash on the App Store and Google Play now.

Get POU: The First Smash in the App Store
Get the latest tips & apps for your Smartphone