How to rip your movie collection to watch anywhere

Stuck in quarantine? Now's a great time to digitize those DVD and Blu-Ray discs 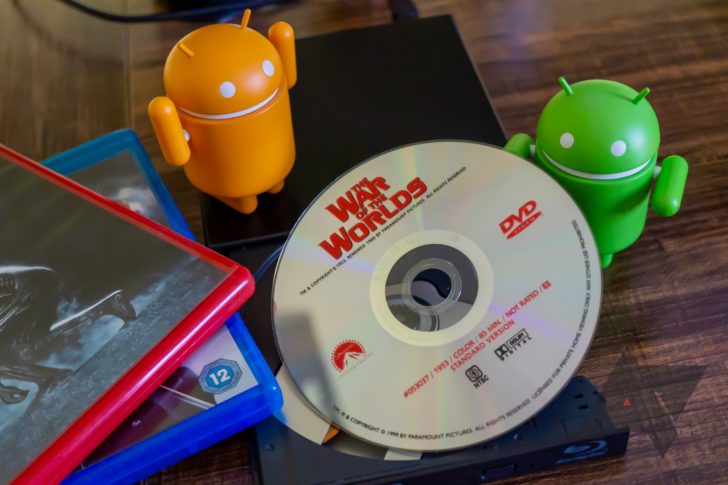 Physical media has its time and its place, but in the era of ultra-fast home Wi-Fi and high-res smartphones and tablets, a Blu-Ray or DVD basically makes no sense for a lot of the ways we now consume content. While ripping your collection of discs to digital can be time-consuming and comes with a real cost (disk space), going through the trouble can get you something Netflix can't: permanent, go-anywhere access to your complete media collection that no one can take away.

There are a few things you need to rip DVDs or Blu-Rays. First, obviously, is a disc drive. If your PC already has a drive, or if you have an external DVD/Blu-Ray drive collecting dust in a closet or drawer, you're already one step ahead!

Not all drives are created equal for ripping, but the ASUS ZenDrive Silver is a great (and affordable) option for DVDs. Blu-ray drives (which can also read all DVDs) are still significantly more expensive than DVD drives, especially external USB models — the Pioneer BDR-XD07B is a popular option for ripping, but it costs around $100. I use the ~$50 LG WH14NS40 for both DVDs and Blu-Rays, and it generally works well, but it's an internal drive that only works on desktops with a spare SATA slot.

You'll also need a fair amount of disk space, since the ripping process involves dumping the contents of a disc onto your PC. DVD movies are usually only a few gigabytes, but Blu-Ray movies can easily take up 20-60GB of space. That's only counting the movie file itself — if you want to store the bonus content as well, make more room on your PC.

Now it's time to start ripping discs. My favorite application for this is MakeMKV, which can create rips from both Blu-Ray discs and DVDs, and is cross-platform. You can download the latest version here. The app can be used for free with the official beta key (a new one is generated each month, so bookmark that), but if you want to support the project, you can purchase a lifetime key for $50.

Once you have your drive, plug it into the fastest port on your PC (a blue USB 3.0 connector, in most cases), pop in a movie, and open up MakeMKV. If you haven't already, go to Help > Register and enter the latest beta key. If everything is working properly, information about the drive and disc will appear on the right side of the window. Click the big drive button to scan for content. 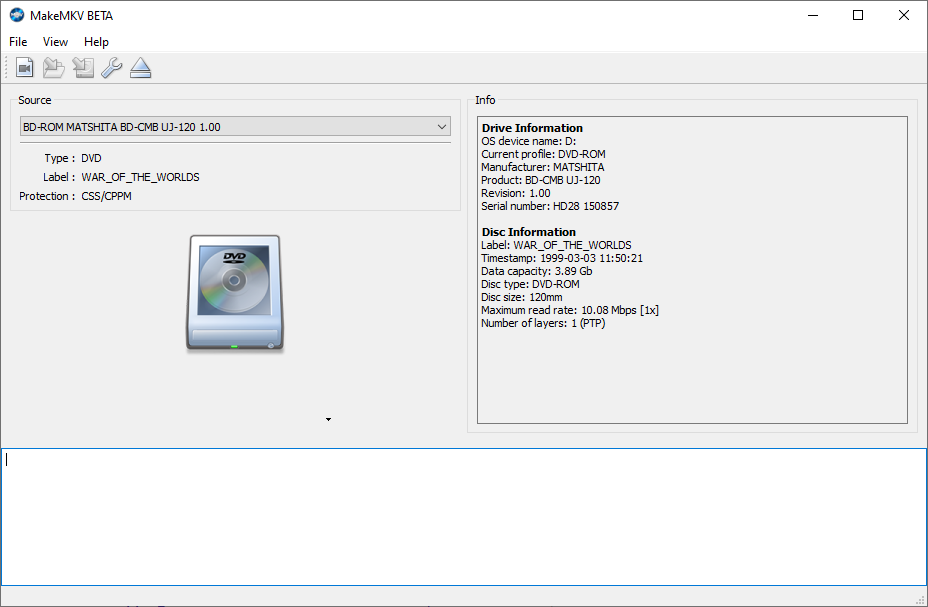 Once MakeMKV scans the disc, the contents will be displayed on the left side. Most discs usually have many media files — besides the movie itself, the disc can also contain bonus content, trailers, menu files, and other data. MakeMKV automatically hides content shorter than 120 seconds. 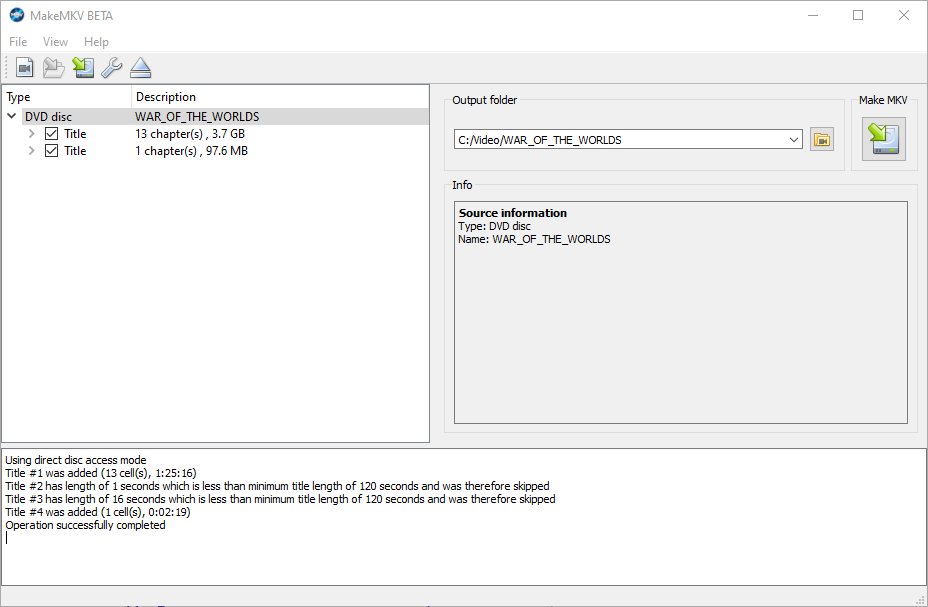 The movie is usually the largest file, so uncheck all of the others, change the output folder if you want, and click the save button to get started. You'll probably want to grab a coffee or get other work done while MakeMKV does its thing — depending on the speed of your PC and drive, it can take a while. 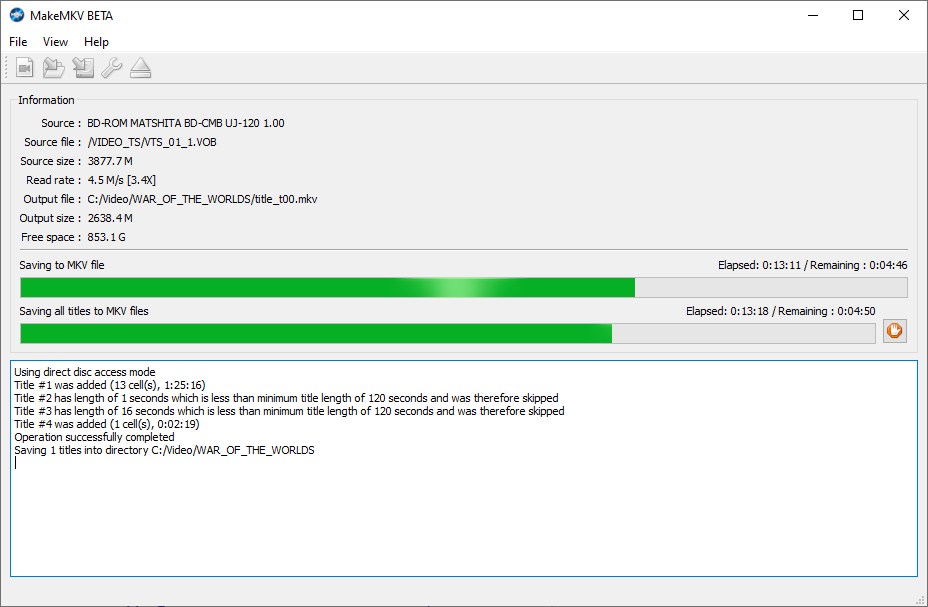 Once it's done, try opening the file and see if it works. You may need VLC Media Player to test it out, depending on the video and audio codecs being used. All the subtitle and audio tracks from the original movie should be present, unless you deselected them from MakeMKV. 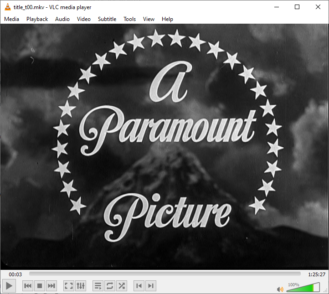 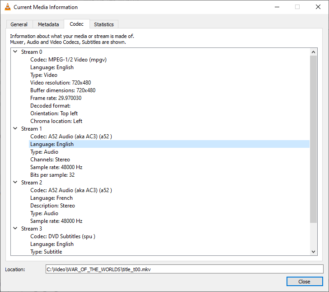 MakeMKV stores ripped movies in the same format and compression level as they are on the disc, which usually means large file sizes. That's why it's a good idea to convert the ripped MKV file to a more common video format — more of your devices will be able to play it, and it won't take up as much disk space.

There are dozens of applications for converting video, but my favorite is HandBrake. It's completely free, works on all major desktop platforms, and has dozens of presets for popular formats and devices. Converting a ripped movie to a more manageable compressed video file only takes a few clicks.

Once you install Handbrake, open it and select the MKV file of your movie. Handbrake offers a ton of options for customizing the video and audio format, but it's probably best to use the 'Fast 1080p30' preset. If it's not selected automatically, click the Presets dropdown menu and pick General > Fast 1080p30. 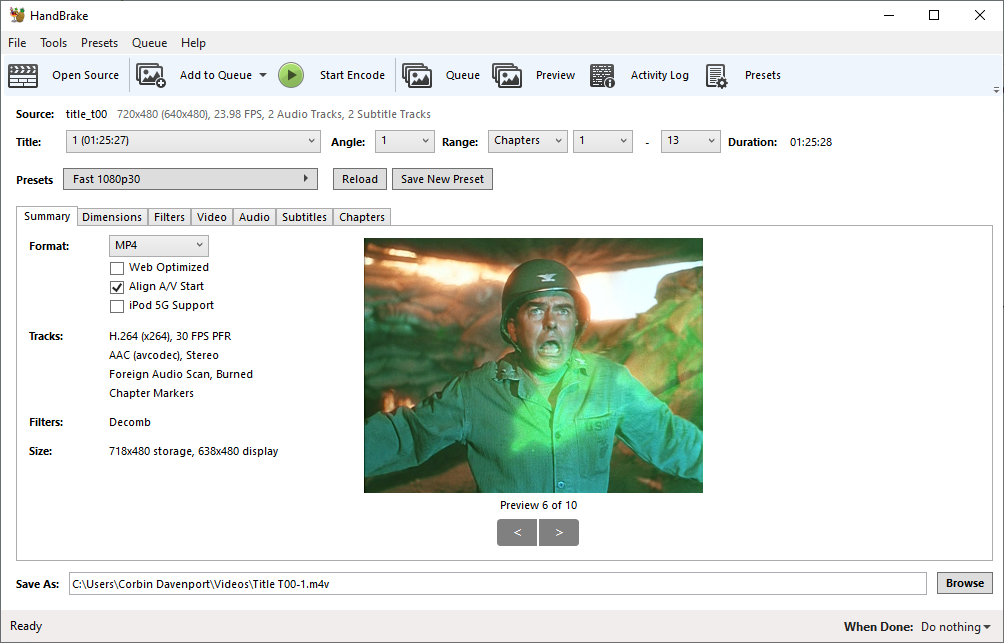 Once you're ready, click the 'Start Encode' button and let Handbrake do its thing. Just like MakeMKV, the speed depends on the length of the movie and how fast your PC is — converting a DVD version of the 85-minute War of the Worlds on my Ryzen 5 PC took around 10 minutes.

The encoding process will also eat up all of your CPU cycles, so it's best to leave your computer alone during this step. If you're doing this on a laptop, make sure to set it on a table or elevated surface where the fans aren't blocked. Otherwise, your CPU could slow down to reduce temperatures, making the process take even longer. 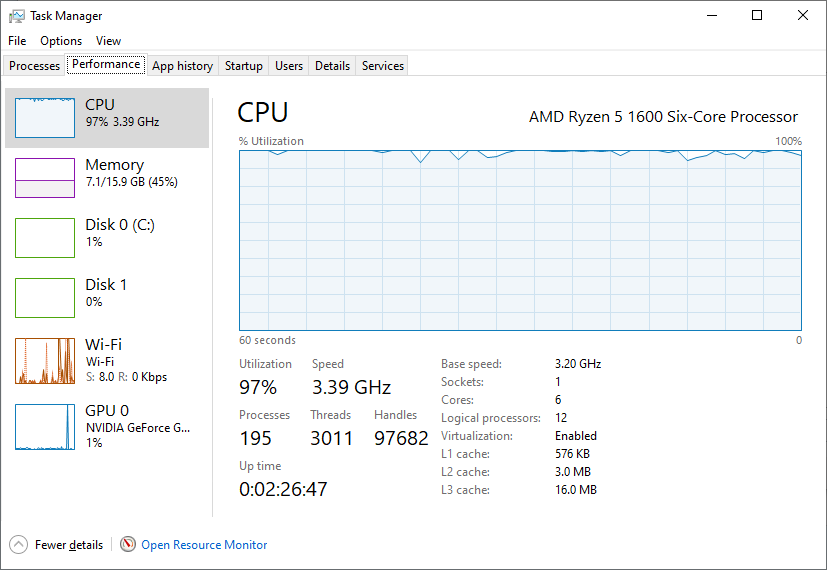 Encoding video pushes most CPUs to their limit

When the conversion is complete, you'll finally have a copy of your movie that is playable on just about any computer, phone, tablet, or TV! You can obviously stop reading right here, and just copy the file manually to the devices you want to watch the content on, but we're also going to cover applications that make it easy to stream your content to other devices.

Streaming to other devices

Simply copying your movie files to each of your devices does work, but there are applications that let you stream content on-demand to other devices on your own network with a Netflix-style interface. The two most popular options for this are Kodi (formerly XBMC) and Plex Media Server.

Plex is my personal favorite of the two. Once you install the Plex Media Server on a spare PC (or Nvidia Shield, or NAS, or Raspberry Pi) and point it at your movies folder, it can stream that content to any other devices connected with the same Plex account. If your server has enough power for video encoding, Plex can even convert movies to different quality settings. Also, saving movies to watch offline your phone or tablet just takes one tap, and it's easy to set up access outside your local network.

Kodi is an open-source media center application, with plug-ins available for playing content from a wide variety of platforms and services. Once you set up a server for your movies, any other devices on your local network with Kodi installed can play the content.

Pricing is also an important factor. Plex allows you to create a server and watch content from it with the web app (or TV apps) for free, but if you want to watch your movies using the mobile Android or iOS apps, you'll have to pay an in-app purchase for each device. There's also a Plex Pass subscription, which removes the need for the in-app purchases and unlocks other features. By comparison, Kodi is completely free (and open-source), but it's not as seamless of an experience as Plex.

Of course, once you have a collection of movie files, you can use whatever software you want and try out something different whenever you want. That's the advantage of owning your own content without any pesky DRM.

Plex and Kodi can add movie posters and other information to your content, but only if you name your files in a way the applications can understand. This is fairly simple for movies: use the title of the film, followed by the year it was released. Something like The Avengers (2012) or Zootopia (2016) will usually work.

TV show organization is a bit more complicated, as the files usually have to be separated into folders based on the season. See Kodi's and Plex's guides for more information.

While Kodi is primarily designed for playing locally-stored content, it can connect to and play content from network drives. The first step is to set up a DLNA server on your PC, which will allow let other devices stream content from your PC. This works with more than just Kodi, too: Roku devices, the PlayStation 3, various smart TVs, the Xbox One, and plenty of other devices can play content from DLNA servers without any additional software.

Windows 7 and later have a DLNA server built-in — just search for the 'Media streaming options' control panel in the Start Menu and click the 'Turn on media streaming' button. 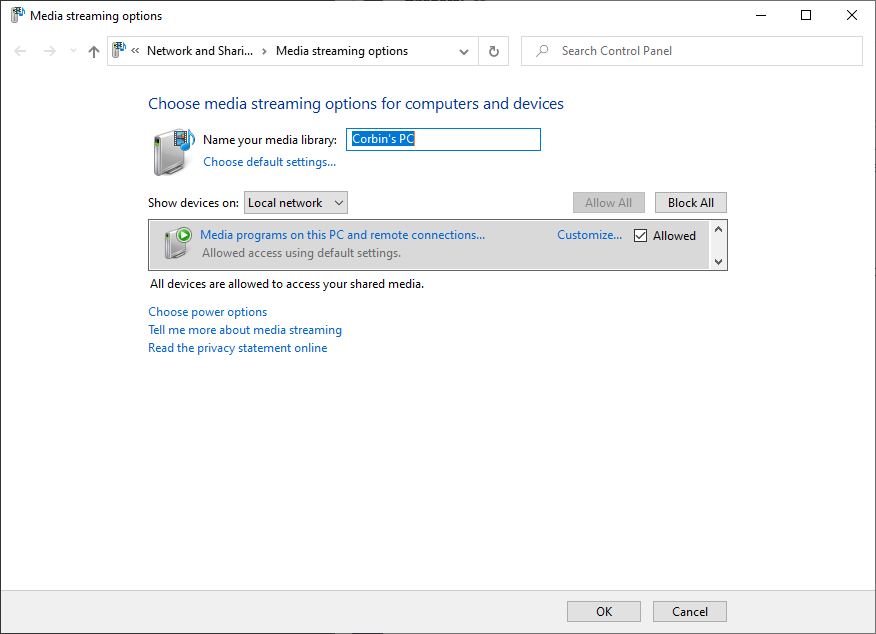 If you don't want to give media players access to your entire PC's media library, or if you're not on Windows, you should give Universal Media Server a try. Kodi also supports connecting to SMB shares (e.g. shared network folders on Windows), but only when Kodi is running on a Windows device.

Now it's time to add the server as a media source in Kodi. You have to do this for each device you set Kodi up on, but the process doesn't take long. First, we have to enable DLNA server support in Kodi: 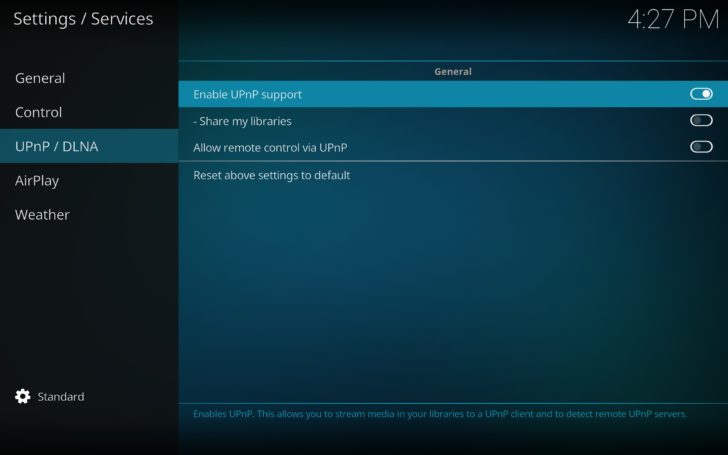 Now add your server as a media source in Kodi:

Your PC's movie folder will now appear as a media source in Kodi! Pat yourself on the back.

If you want to set up Plex, it only takes a few minutes. First, create a Plex account if you haven't already, then download Plex Media Server on your PC. The install process varies by platform, but on Windows, the installer does all the work for you. Once the server is running, it will open the web interface in your browser (if not, right-click on the Plex icon in your taskbar and select 'Open Plex'). 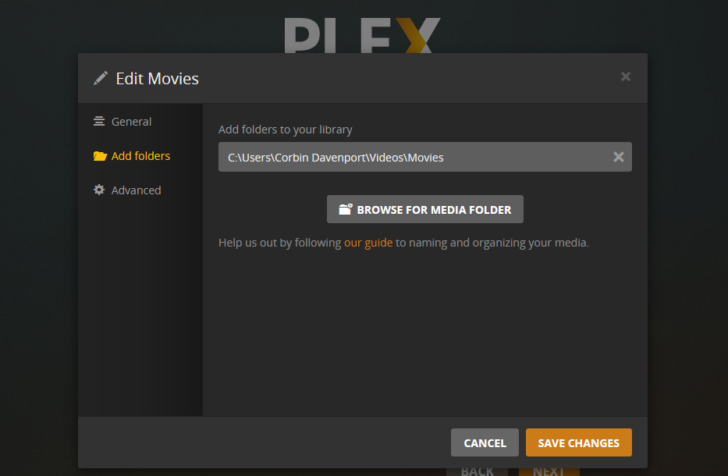 The web interface will walk you through the process of logging in and adding media libraries. After that, your content will appear on any device logged into the same Plex account. On mobile devices, there will even be a download button you can use to save the movie for offline viewing, with multiple quality options available.

Plex is an incredibly versatile piece of software, so once you have some time to kill, I recommend going through the app and server settings and seeing what it can do. In addition to movies, Plex also supports TV shows, music storage (which I use almost every day), photo backups from mobile devices, and much more. Plex even offers a collection of free movies and TV shows, on top of whatever content you've added yourself.