How to Use Emojis on Android [5 Methods] 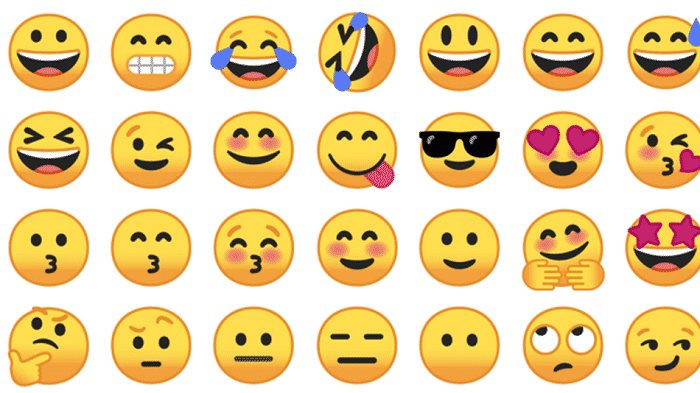 Make Your Emojis Lively On Android!

While Apple had made emojis a default part of the iPhone keyboard very early on, it took some time for the Android community to catch up by introducing emojis on Android phones. Once it did, however, there was no looking back!

Unfortunately, though ,people who own older models of Android phones may not have support for emojis on their keyboards. The result is that they have boring old squares instead of smilies, hearts, and the other emojis that smartphone users all over the world are enjoying. But that doesn’t mean there aren’t other ways to get emojis on Android!

Fortunately, just like everything else, there’s an app for emojis on Android, too. There’s also no dearth of third-party applications that users of older Android models can turn to in order to receive their fair share of emojis.

Many such apps, especially the ones discussed below, usually require you to download and install a brand new virtual keyboard for your old Android set. For this, visit your Android phone’s Settings menu, select “language and Input’, then select “Virtual Keyboard’, and then “Manage Keyboards”. This will give you a selection of keyboards.

Pick the one you want to use, making sure that it also gives you a wide range of emojis to choose from!

You can find a list of the top apps for Android emojis below, along with some discussion about each. When downloading any of these and the keyboards that come with them, you should also keep in mind that the emojis you send might look different to the receiver. Likewise, the emojis that other people send to you may look different from what they intended.

If you really want to find a way around this fact, you might have no choice other than to root your Android phone. This procedure is not recommended unless you’re an expert at this level of technology. The consequences could be bricking your device and stripping it of any resale value. Since this is not something that most Android users want to risk, below are some apps that could get a similar experience without the huge risks of rooting.

The methods below should be easily available to all Android phones, no matter who their manufacturer is. Your Samsung, Huawei, Google, and Xiaomi phones should all work with these alternative apps equally well: 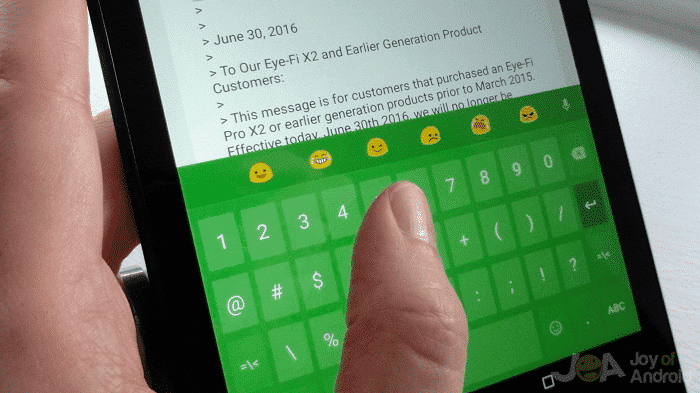 Choose Between Several Third-Party Apps For Your Android Emojis!

You don’t have to look far in order to download a decent third-party app for getting all the emojis your Android-loving heart desires! This is an especially solid option if you require a wide variety of choices in your emojis.

One excellent example of such an app is the Kika Keyboard. This is an app that will give you a huge range of three thousand emojis and counting! It doesn’t just give you all these options as manual choices, either.

The app will actually try to predict which emoji on Android you’re likely to use while you’re typing a message or post. This could serve to add a lot of color and variety to your text creation without any effort or hassle.

There are several other options available in this app alongside emojis, such as GIFs, stickers, and other features. These are for sending across social media platforms like Snapchat, Kik, Facebook Messenger, Instagram, etc.

There are many other options if you’re considering third-party apps for your emoji on Android needs. They’re similar to the Kika app for the most part, so it’s not worth going into the details of every one. These apps are excellent not just for Android phones that don’t support emojis in their default settings, but also for users of newer models who want to up their emoji game.

You can browse a bit in the Play Store to make sure that you’re getting just what you need. If you’re not satisfied with one app, you can always uninstall and delete it, then pick another! 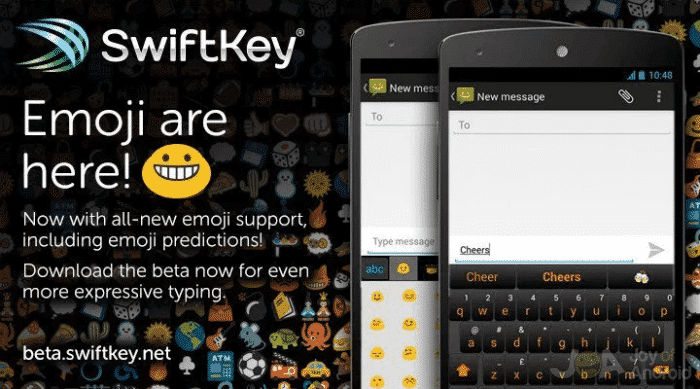 Emojis, Swiping, Predictions: SwiftKey has it All!

Even if you’re not on the lookout for new, free, and unique emojis for your Android phone, you may want to download SwiftKey as soon as possible. This is because it offers the amazing feature of swiping between the virtual letter keys so you can type whatever you need!

This feature is a great time-saver and can predict your messages using cutting-edge artificial intelligence technology. The suggestions and swiping combined will serve to speed up whatever you want to type, getting your work done in a fraction of the usual time.

If your Android system is around Android 4.1 or later, you’ll also be able to use SwiftKey to update your emoji on Android. The extremely useful features it provides will also predict what kind of emoji you’ll probably use in the course of your typing. 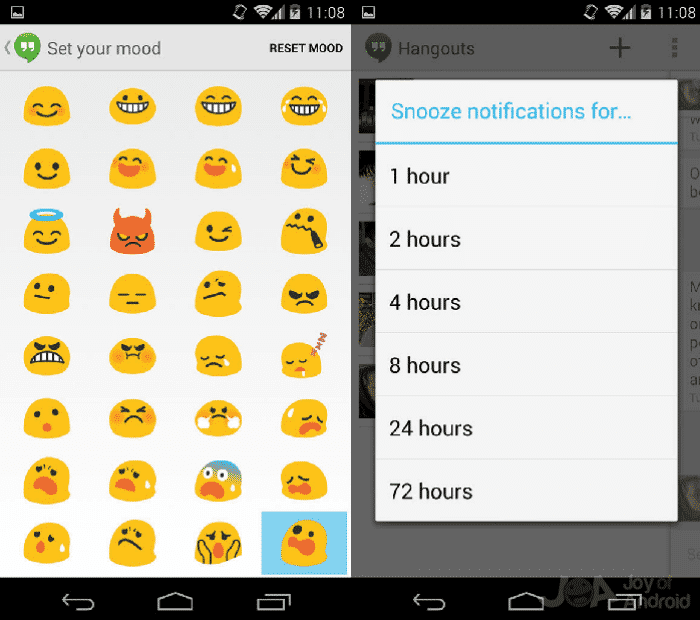 Don’t Underestimate This Humble App; It’ll Get You Places!

Almost every Android phone will have a Hangouts app already installed on its interface. If not, it can easily be downloaded from the Play Store. This is not just an app to use across Gmail, but can also serve as an excellent messaging platform with a wide range of emoji options.

Having Google Hangouts replace your usual texting apps is probably a good choice if you currently have a very old Android model. If you can’t afford to update to a more recent model or even a newer operating system, having Google Hangouts could get you a similar experience of using emoji on Android without any risks. It will also give you the option of sending stickers and GIFs. If your phone doesn’t run Android 4.1 or a later version, this app could be one of your best bets. 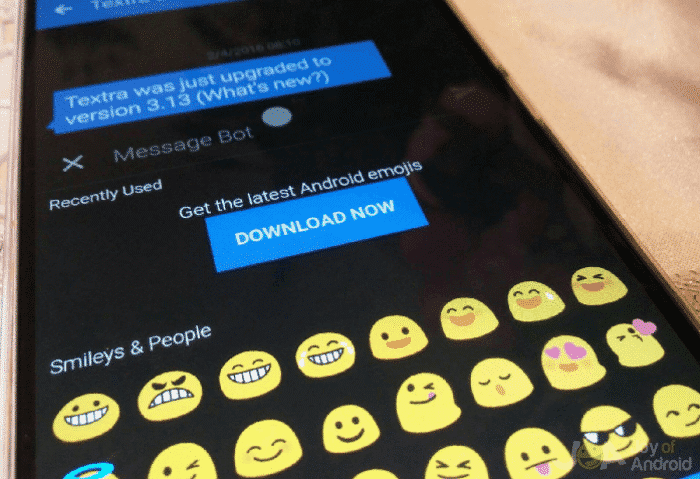 Give Your Android the iPhone Experience

When you download Textra, you’ll have to give up your current texting method. This could be a bothersome experience, but you’d soon see how the sacrifice is ultimately worth it! With Textra, you can get the kind of emojis that iPhone users have.

This app is a must-have for those who dream of owning an iPhone but are too comfortable with their Androids to give them up. They might also be unable to make the change due to financial reasons. Whatever the case may be, they can achieve their dream in one aspect by having the iPhone emojis become a part of their everyday texting life. You can also select from a range of Android, Emoji One, and Twitter emojis. 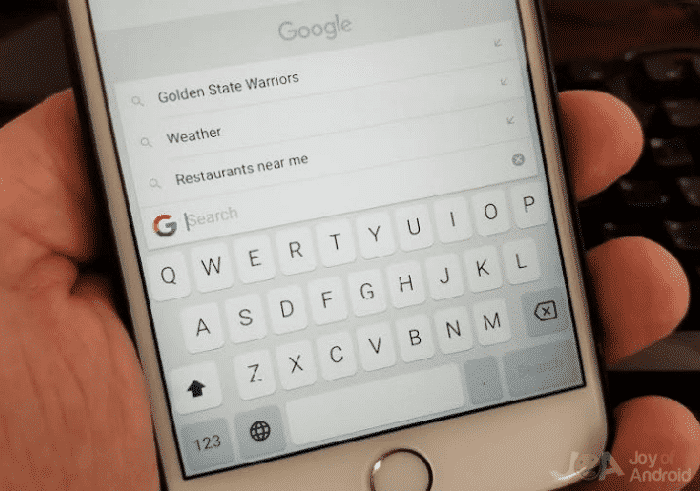 Tweak Your Android to Predict Your Emojis

Downloading apps may be a supremely easy method for getting the apps you like, but they do take up a lot of space. Not all Android users may want to go that way. Luckily, there is yet another option where you can get the emoji on Android you want for an updated style of messaging.

You may not be aware of this yet, but all Android systems simply have to support the input of emojis when certain words are typed. This feature is not installed by default, so you’ll have to locate it. For this, visit the Settings on your Android phone and go to “Language and Input.” 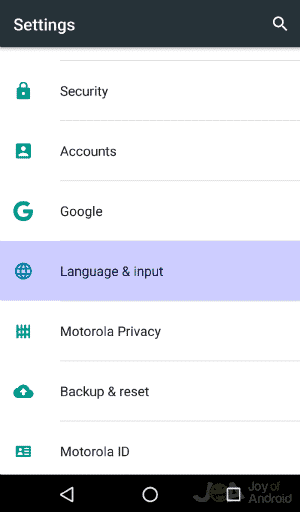 Get The Suggested Emojis While You Type!

Here, you should be able to view an option for “Google Keyboard”. Select the Settings options on its right, and go to “Text Correction”, then “Add-on dictionaries”, and finally “Emoji for English Words.” Once you select this, an Install button will pop into view. After you install this particular dictionary, you’d get emojis being suggested while you’re typing. If the emoji matches and you want to use it, simply click on it.

So Which One Would You Use?

The use of emoji on Android is highly popular, especially among Android users. Making it easier for people to use these adorable little pictures in new and interesting ways is a huge step forward. Since the Android operating system is such an open and flexible one, the use of emojis can, fortunately, be used in several ways.

You may choose to use certain apps to achieve this, or utilize the third-party, pre-installed apps already present in the system. Any of the methods outlined above will be excellent, but the best one depends on your own requirements and preferences.

It’s now time to tell us which emoji method you ended up picking. What did you like or dislike about it? Share your experience below and let the Joy of Android community benefit from it!