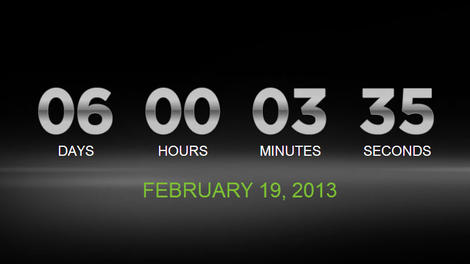 The HTC One is almost upon us as a teasing countdown has appeared on the Taiwanese firm's website, complete with candid flashes of its new flagship device.

Originally rumoured as the HTC M7 it's looking ever more likely that the handset will launch under the moniker HTC One at a special event on February 19.

Give the HTC homepage a couple of seconds to properly load and you'll notice short video clips will begin to play behind the timer, offering up the briefest of looks of the HTC One.

It's the final countdown

There's little to be gained from these snapshots, with HTC going heavy on the flare effect to conceal the majority of the handset.

What you do see is a rather imposing camera lens, rumoured to support new ultrapixels technology, and various flashes of a curved chassis and the metallic HTC logo on the back of the white One.

TechRadar will be present at the event on Febraury 19 where we expect to see the flagship device officially unveiled, so keep a look out for our hands on HTC One review.