The HTC U11 might be getting some good reviews from the tech press, but the latest flagship phone from HTC has also become the next handset to miserably fail the trademark bend test, as conducted by the JerryRigEverything YouTube channel.

HTC U11 vs Samsung Galaxy S8

The video, shown below, demonstrates that the U11 can hold up to the channel’s scratch and burn tests pretty well. The scratch tests also did not seem to affect the U11’s unique Edge Sense feature. 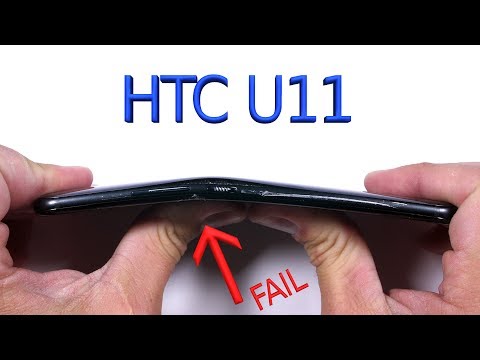 However, when it came to actually bending this phone, things went south. The U11 bent quite a bit when pressure was placed from the front to the back. When the bend test was then used from the back to the front of the phone, the front glass of the U11 cracked, and that also caused the U11’s LCD display to fail as well.

JerryRigEverything claims that the curved 3D glass that’s used on the U11 is more rigid than the flat glass that was used on the earlier HTC U Ultra, which actually survive its own bend test. The U11 also does not have a plastic buffer between the glass and the phone’s metal frame, so when the bend test was applied, there was no place for that pressure to go. The channel claims HTC should have used a more rigid frame for the U11 to keep the glass from bending, but then again it might have not been able to put in the Edge Sense feature.

Last week, the BlackBerry KEYone also failed the channel’s bend test, due to little to no adhesive on the back of that phone’s screen. The phone’s manufacturer, TCL Communication, has since claimed that only a small number of owners have reported this issue, but added that it is “actively examining additional adhesive measures” for the KEYone.