Huawei Ascend P7 vs Apple iPhone 5s -- which is the better smartphone? 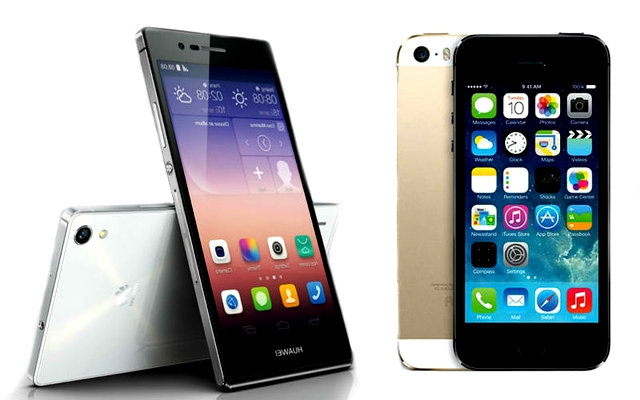 Less than a year after the launch of the Ascend P6, Huawei has revealed its latest flagship, the Ascend P7. The Chinese company, which is a massive force in the telecommunications sector, is desperate to make a similar impact in the smartphone arena.

Many in the industry had already written off Huawei's attempts well before the P7's launch, simply because they feel that the competition is far too strong. One of these rivals is the Apple iPhone 5s. So how do the devices measure up to each other?

First of all, I think the 5s edges the P7 in terms of looks, but just about. Huawei deliberately chose Paris as the location for its phone's unveiling because of its links to the fashion industry, and the P7 instantly became one of the most stylish devices of its kind on the market. However, the iPhone's effortless design and beautiful simplicity make it not only a sexy mobile but also an undeniably attractive accessory.

Immediately striking is the size difference between the two smartphones. The P7 is much larger than the 5s in two dimensions, and weighs 12g more than its counterpart. The P7 though, is somehow over a millimeter slimmer than Apple's offering. Understandably, the P7's 5in, 1,920 x 1,080 resolution screen, translating into a super-clear 441 pixels per inch beats the iPhone's 4in, 1,136 x 640 resolution, 326PPI display in every single way.

Apple's flagship holds the much-praised A7 SoC, clocked at 2.3GHz. The P7, on the other hand, packs the Hisilicon Kirin 910T, of which little is currently known. This is clocked at 1.8GHZ. Neither of the phones' batteries are worth shouting about, but the P7's 2,500mAh version, which offers up to 14 hours of 3G talk time, is stronger than the iPhone 5s' 1,560mAh juice box, which offers a measly 10 hours or less.

The 5s comes in 16GB, 32GB and 64GB models, while the P7 only offers up 16GB of internal storage. However, the latter offers expandable memory via a microSD slot, which its rival lacks. The P7's 2GB of RAM beats the 5s' 1GB. There's no surprises in terms of Bluetooth and 4G connectivity.

The Ascend P7's 13-megapixel rear camera and 8-megapixel front-facing snapper aren't troubled by the iPhone's 8-megapixel and 1.2-megapixel versions. If you're a fan of pictures, there's only one winner in this particular department.