Huawei Mate 20 Lite Appears On Geekbench With 4GB Of RAM

That being said, the Huawei SNE-LX1 appeared on Geekbench, and everything points to the fact this is the Mate 20 Lite handset. According to Geekbench, the device will be fueled by a 64-bit octa-core processor clocked at 1.71GHz, and chances are we’re looking at the Kirin 710 here, Huawei’s mid-range processor, the company’s most powerful mid-range chip, that is. The Huawei Mate 20 Lite will also include 4GB of RAM, and it will ship with Android 8.1 Oreo out of the box, while you will find Huawei’s Emotion UI (EMUI) skin on top of it, of course. Geekbench says that the Huawei Mate 20 Lite managed to hit 1,598 points in the single-core, and 4,665 points in the multi-core test, in case you’re interested. TENAA’s listing, which surfaced earlier, backs this spec info, though it seems like a 6GB RAM variant of the phone will also become available, at least in China.

The Huawei Mate 20 Lite surfaced a couple of times thus far, we’ve seen several renders of the phone, and based on those, the device will be made out of metal and glass. The Mate 20 Lite will sport really thin bezels, though a display notch will be a part of the package, and a thin ‘chin’ as well. The device will include two vertically-aligned cameras on the back, and a rear-facing fingerprint scanner. The phone’s back side will be curved, while the company’s logo will sit on the back as well. All the physical keys will be included on the right-hand side of the Mate 20 Lite, and chances are that this phone will resemble the Mate 20, though the Mate 20 Pro is rumored to ship without a display notch, so it remains to be seen how accurate rumors / leaks are. 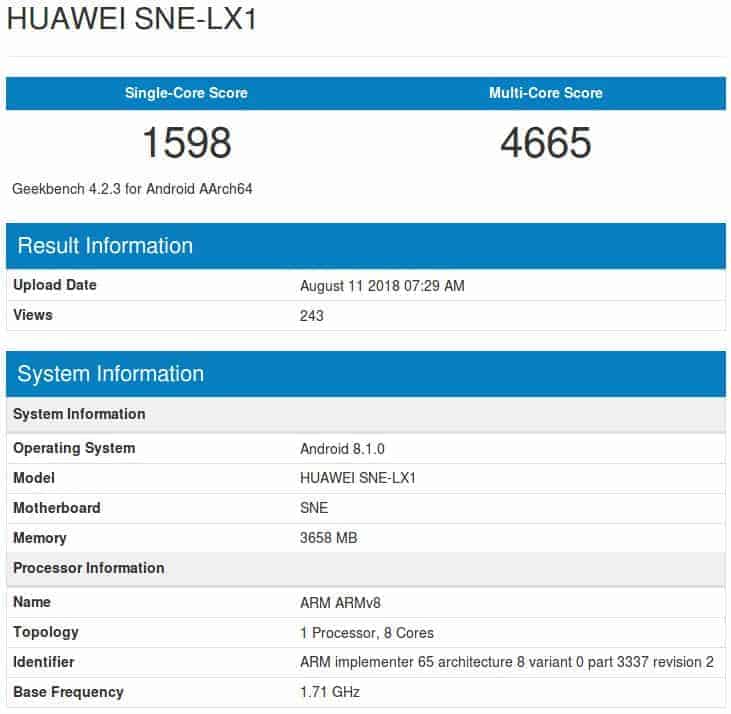 The post Huawei Mate 20 Lite Appears On Geekbench With 4GB Of RAM appeared first on AndroidHeadlines.com |.