The Huawei Mate 20 Pro front panel had surfaced several times thus far, and the prototype of the device itself has just surfaced as well. If you take a look at the gallery down below, you will be able to see that prototype pictured in two real-life images. As you can see, the device sports a rather large notch at the top of the display, the same notch that was pictured in previous leaks, when the phone’s front panel surfaced.

Now, in addition to that notch, the device also comes with an extremely thin ‘chin’ below the display, that bezel is almost as thin as the phone’s side bezels. The device actually resembles the Galaxy S9 Plus a bit, as its display is curved on the sides, which is a significant change compared to its predecessor. It is possible that Huawei is planning to include some sort of advanced facial scanning technology in the Mate 20 Pro, which is why its notch is so wide, as the Mate 20’s notch will be considerably narrower, it seems. If previous leaks are to be believed, the Mate 20 will ship with a waterdrop notch, similar to the one that OPPO included on its R17 and R17 Pro smartphones.

The Huawei Mate 20 Pro will be made out of metal and glass, according to leaks, while the device will be fueled by the Kirin 980 64-bit octa-core processor, Huawei’s newest mobile processor. The Mate 20 Pro is expected to ship with at least 6GB of RAM on the inside, while Huawei will probably include plenty of storage in the phone as well. Android 9 Pie will come pre-installed on the Mate 20 Pro, while on top of it you’ll get Huawei’s Emotion UI (EMUI) 9.0 skin. The phone will ship with a rather large battery, battery capacity of at least 4,000mAh is expected for this phone. The device will become official on October 16, and it will be announced alongside its sibling, the Mate 20. 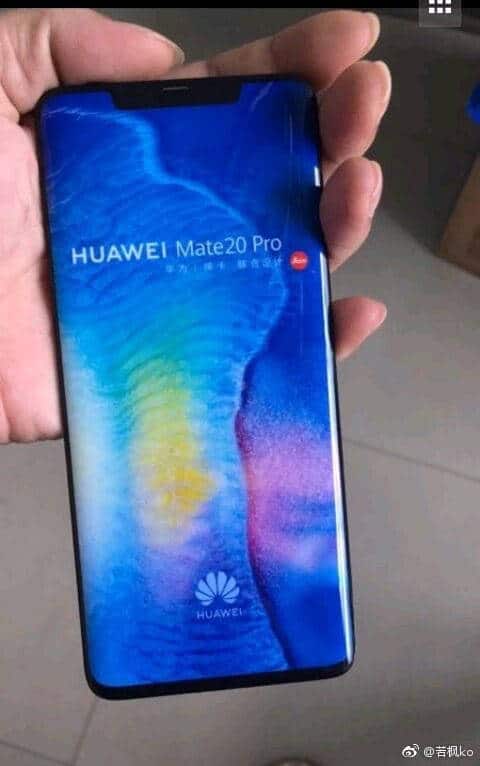