hen Huawei invited us to their recent product launch party in New York City, we weren’t certain what would be announced but had a pretty good idea that a mid-range device would be on the menu. With its big brother — the premium P8 — under their belt, the Chinese manufacturer has been making inroads at capturing more of the American market share and a competitively-priced offering would be a logical next step. 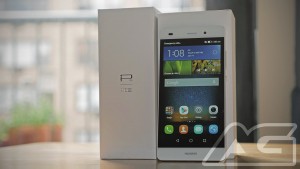 The Huawei P8 Lite was debuted and, with a price point of just $249.99 (unlocked), we were immediately intrigued. They also unveiled their newest wearable, the TalkBand B2, but we’ll get to that a bit later. I took home a review unit and quickly began putting it to work. TL;DR: Reasonable concessions are made to deliver a quality device at an enticing sticker price.

While I’d never personally used the P8, our staff had mostly positive things to say about their experiences. I approached with optimism. The included accessories are pretty much what you’d imagine: wall charger, warranty information, MicroUSB cord. The packaging was minimal and modern, akin to what you may expect from an iPhone.

After taking out the handset, I was impressed with the smooth feel and thin profile. The body is plastic, which doesn’t scream luxury, but is a small compromise for an attractive price point. Even skipping opulence with the build materials, it felt really well-made and never “cheap”. On paper, its 5-inch display leaves a bit to be desired in the resolution department. I found that in practice, however, it didn’t seem to be a big problem. While the P8 Lite only has 720,  the Gorilla Glass 3 IPS LCD screen had a liveliness and was sharp enough for – again — the price point.

Under the hood, the P8 Lite performed about as well as I expected. With an octa core processor (Qualcomm Snapdragon 615) and 2GB of RAM, it handled basic tasks with ease — though, at times, I did experience some lag. I’m not a power-user and I would imagine that Huawei recommends anyone with more intense needs just go ahead and size up to the P8, anyway. It can’t be all things to all people but the P8 Lite will serve the mid-level market well. 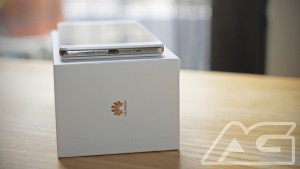 In the multimedia department, the P8 Lite’s camera is quite nice. A 13-megapixel sensor and f/2.2 lens are nothing to sneeze at and the images I was able to get were better than I expected for $250, even if suffering from low-light woes. I own a DSLR and don’t rely on my phone for serious photography so your mileage may vary, here. Again, for the price (recurring theme), nothing wrong with what you’re going to get from this device.

Call clarity and quality were fantastic and data speeds met all of my needs, easily. Fast and reliable. One of my gripes from Samsung’s latest line is the discontinued support of expandable memory. Huawei gets it right and supplements the internal 16GB of storage with a MicroSD card slot. Battery life was fair, getting me through my workday but not much more. You’re going to want to keep a MicroUSB cord or portable power pack with you for longer days.

One of my beefs with this bad boy is that it’s running KitKat. I may be speaking out of ignorance here but I can’t imagine it would have been a huge “get” to ship this thing with Lollipop. As a consumer, opening a brand-new product up to find that I’m not ready to go with the latest OS, out of the box, would be a big disappointment. Huawei has also loaded their own proprietary user interface, Emotion UI, which isn’t a deal-breaker for me but would give fans of a clean-install a reason to crinkle their nose. Side note: the P8 Lite features a more primitive version of Emotion UI — 3.0, as opposed to the P8’s 3.1.

Overall, this is a big development for Huawei. They’re making strides to become a household name and offering a mid-level device at such an accessible price is a great start. While the P8 Lite isn’t the best middle tier handset you’ll come across, it certainly has its place and, for $249.99 without a contract, may be worth a test-drive of your own. 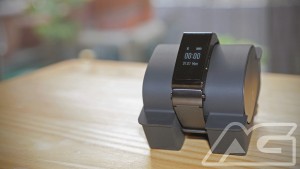 The P8 Lite wasn’t the only unveiling we saw at our recent sitdown with Huawei. The TalkBand B2, successor to the previous-gen TalkBand B1, is a $179.00 fitness tracker that doubles as a Bluetooth headset and was announced as a recommended companion to their latest phone.

This wearable is composed of a metal body and rubber wristband. All of the components feel high-quality and it’s quite comfortable to wear. I did have a few moments of fear, envisioning knicking it on a doorway, but it never happened.

With only one physical button, most of the functionality is handled through the PMOLED touchscreen. The display is 0.7 inches and, as a default, shows the time, battery life and date. Navigating through the interface is very simple; swiping your finger accesses the timer, sleep, calories and steps functions. The inner-workings (gyrometer and accelerometer ) ensure your data is tracked accurately. 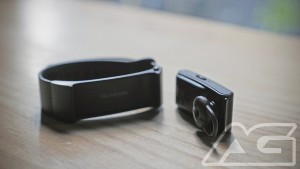 One of the cooler features is the convertible earpiece. Simply unlock the base of the device and a Bluetooth earpiece pops out, ready for calls. While I’m not a fan of Bluetooth earpieces, aesthetically, I have to admit that I did feel a bit like Batman the first time I used this function.

Battery life was fine, more than I ever needed in fact, but charging was sort of a drag. You have to take apart the wristband, with aforementioned Bruce Wayne method, to access the MicroUSB charging port. It’s not a huge hassle but it brings a sense of clumsiness to an otherwise sophisticated experience.

While I’m more inclined toward something with a traditional watch form factor, this is a worthy wearable that I think many folks will find fits them just perfectly — especially for under $200 bucks.

Shop for the Huawei P8 Lite and TalkBand B2, now!