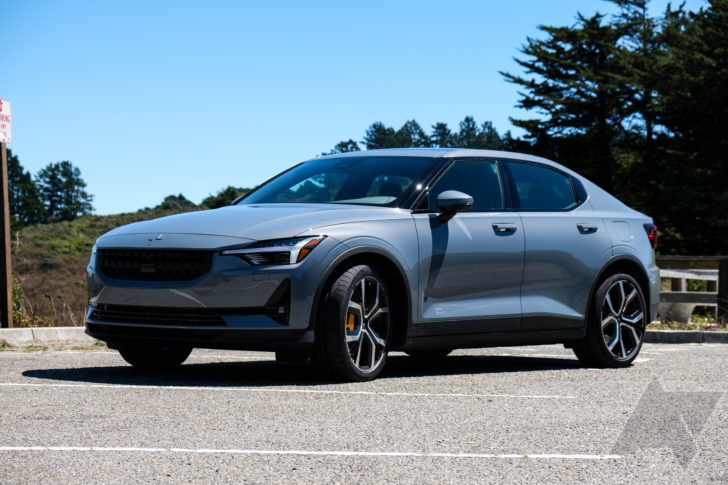 The Polestar 2 is a very important vehicle. It's the first legitimate EV competitor to Tesla's Model 3, and Polestar's first mass-produced vehicle, both of which are incredible milestones. But we're taking a look at it from the perspective of another huge first: the debut of Google's Android Automotive, an in-car infotainment operating system designed to control everything from navigation and music to your air conditioning and traction control settings. Entrusting Google to build such a platform may sound a bit iffy if you're not familiar with the vehicle space, but if you are, you know automakers have been using Android for years, generally without Google's blessing (and often ludicrously old versions of the platform). After a day with the Polestar 2 in the winding hills of Northern California, I can tell you confidently that Google's cooperation has helped Polestar build a smarter car.

When you take delivery of a Polestar 2, one of the first things you'll likely want to do is link it to your Google account, just as you would a smartphone (worth noting: this is 100% optional). Controlled via a large, center-mounted vertical touchscreen, the Polestar 2 has essentially no buttons outside those you'll find on the steering wheel—a decidedly Tesla callback, enabled by the vast array of controls which Polestar has entrusted to Android Automotive. The onboarding process for Android Automotive.

The experience here actually had me a little apprehensive at first, because it's a bit clunky. On the car, you enter the settings menu where accounts are added, and add a new Google account. The Polestar 2 supports one Google account per driver profile, and additional accounts must be added through different profiles (i.e., no one profile can have more than one account, and it also seems G Suite accounts are not currently supported at all). From that point, the Polestar 2 displays a one-time URL you have to manually navigate to on your phone. This part kind of surprised me, as it seems a bit fussy—why not use a QR code or simply ask you to type your email address on the car's display and use the phone as an authenticator? (Update: Google confirms this will be the retail sign-in experience.) From there, you confirm two codes displayed on the phone and your car match, and are required to enter your Google account password on the phone. At that point, you're off to the races.

While apps are a banner feature, you probably won't ever see Netflix or YouTube on Android Automotive.

The next thing you'll naturally do is set up some apps. The Polestar 2, as you might have heard, has the Google Play Store—granted, with probably not even a dozen compatible apps yet available to download (current media standouts include Spotify, Pocket Casts, and YouTube Music). I used YouTube Music on my drive, and setup was simple, with the app just confirming which of my associated YouTube accounts I wanted to use at first launch. Third party apps like Spotify and Pocket Casts, I'm told, use a relatively similar method to the Google account procedure I described above. Right now, the YouTube Music app in Automotive feels like a stretched out, vertical version of the Android Auto experience, which is serviceable, if not anything special. While apps are a banner feature, you probably won't ever see Netflix or YouTube on Android Automotive, though, and I doubt you'll ever get anything as "fun" as the Tesla Arcade. Safety is something Polestar and its parent brand Volvo take very seriously, and I think Google has taken a similar cue with Android Automotive. So, don't bet on binging Stranger Things in your Polestar while you're stuck in the interminable drive-thru line at In-N-Out.

The UI is distinctly Volvo, but when you open an app like maps, things feel very Android.

The interface for Android Automotive, based on Android 9 Pie in the Polestar 2. is a blend of Google and Polestar (Volvo) depending on just where you look. This software doesn't feel like something Google built until you get to the actual Googly bits (Maps, Play Store, Assistant, YouTube Music, etc). Climate control, vehicle settings, the profile chooser, and the activity launcher are all very square, dark, and easily parsed interfaces you'd expect of a modern luxury car—they look very Volvo-y. In these places, Google is largely out of the way, visually; it's merely the framework that Polestar has built the interface upon, and little more. But when you've got Google Maps open, it very much feels like you're working from a giant Android tablet, and it's immediately familiar. I think this is the real beauty of Automotive: Google can finally bring the experience of using a fully-featured smartphone app into the car, and that app can be updated and optimized to make that experience better over time (granted, Google has to actually, you know, do this). Like those apps, the entire Automotive OS, and much of the vehicle's own firmware, can be updated over the air, something Polestar indicates it plans to take serious advantage of. 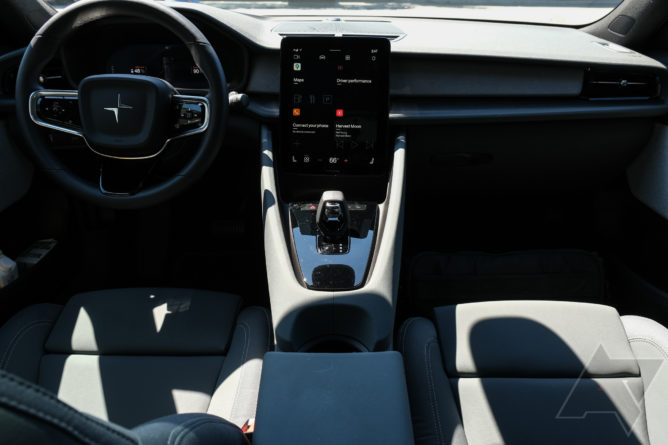 When you've got Google Maps open, it very much feels like you're working from a giant Android tablet.

The Google Assistant is the true "killer app" for Android Automotive, though. Being baked into the car, it allows for actually-decent voice control for vehicle functions such as cabin temperature, music playback, navigation, and smart home devices like your garage door. The voice commands largely work as you'd expected if you've ever used a Google Home. Just say "OK/Hey Google," and ask away. I've got a short little demo video of the Assistant you can check out below to get a sense of the experience.

The Assistant generally feels fast and responsive in the Polestar 2, though the situation with the voice processing remains a bit fuzzy to me. Polestar says that some voice commands can work offline, but it's not clear if they meant all commands are processed locally, but those that require a data connection won't complete, or something more nuanced. Given something as puny as a Pixel 4a can manage with on-device voice commands no problem, I don't see how hardware could be a limitation here. Still, as long as you're connected to LTE (the Polestar 2 comes with 3 years of AT&T data), the commands are a breeze. Set the cabin temperature, turn on air recirculation, turn down the volume, turn up the seat heaters, ask where the nearest Target is, what the weather's like in Pebble Beach, or how much range you've got left; all via voice.

There are still many limitations to the Assistant's capabilities in the car.

I've asked Google and Polestar for a full list of commands specific to the vehicle itself, but do know that there are still many limitations to the Assistant's capabilities in the car, which are both a result of the experience still being fairly new, as well as the simple fact that the Assistant isn't allowed to touch certain things. For example, while driving modes and settings for things like steering weight and regenerative braking can be controlled in the Automotive UI on the center stack screen, the Assistant is not allowed to adjust these things. This, I think, is a bit of long-standing carmaker "church and state" at play: no vehicle OEM is going to feel comfortable letting a third party issue commands that could alter the actual driving behavior of a car, which is understandable. "OK Google, set cruise control to 70MPH" is, therefore, probably never going to be in the cards for Automotive. Other less sensitive settings like adjusting treble and bass, or basically any secondary stereo function that isn't volume or next/previous track, just aren't supported.

Another feature I found no apparent evidence of in the Assistant experience for now is voice match, (Update: Google says Voice Match is on the Android Automotive roadmap, but is not yet live in current versions). Without voice match, theoretically, a passenger in your car could potentially control your smart home devices, access personal contextual information through the Assistant like family roles, home/work locations, or use tools like find my phone (I did not test this, and do not know if it works). I've asked Google and Polestar for details about this, and will update this post if and when I get official word back.

Assistant, apps like Google Maps, and the Play Store are what paint the real picture of Google's in-car aspirations.

I did notice one Google integration in the car that lived firmly outside the Automotive OS, in the form of the Polestar 2's instrument cluster. This digital cluster, like those on most cars, runs on a separate OS necessary for instrumented readouts of things like the speedometer, power consumption, and other vehicle metrics that are reported live to the driver. It features an in-cluster version of Google Maps, not unlike what you'd get on a modern, high-end VW Group product like Audi. This Maps instance is not running on Automotive, and that to me is illustrative of the deeper partnership required for Google to build something like Automotive in cooperation with a carmaker. It also makes me deeply curious just what Automotive "v2.0" is going to look like. How far will car companies let Google gets its foot in the door? With Automotive as implemented on the Polestar 2, the answer is already "quite far," but this OS is still, in essence, a canvas. Assistant, apps like Google Maps, and the Play Store are what paint the real picture of Google's in-car aspirations, and I don't think they've finished this portrait just yet. 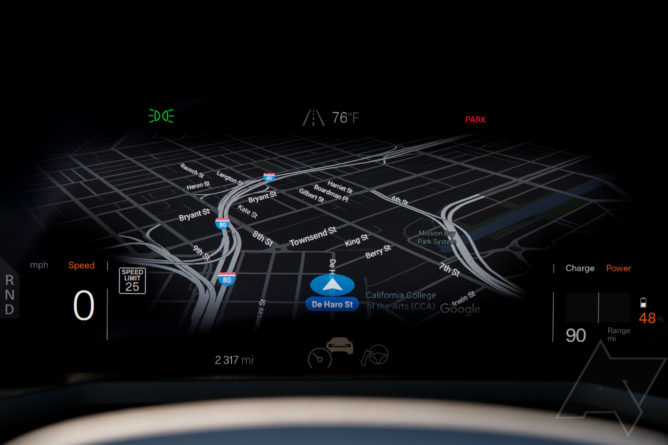 This isn't Android Automotive in the Polestar 2's instrument cluster — but it does have Google Maps.

The possibilities for the future here are almost endless. And that's exciting to think about. Even in this first generation, Google and Polestar have accomplished what many in the automotive industry would have described as folly even a decade ago. A fully over-the-air upgradeable automotive operating system with an app store, and a native, cloud-connected voice assistant to control vehicle functions? This was the vision Tesla had so early on, and which has been instrumental in its success to date. I'm not going to benchmark in any detail against that experience, as I'm just not familiar enough with it. But I can tell you that the Polestar 2 does feel like the future in that way a Tesla does. It is a car that legitimately can—and I'm confident, will—get smarter over time. Such a claim can be made by a vanishingly short list of cars on the road today. That makes the Polestar 2 worth noticing. It also bodes well for the future of cars at large, because while Automotive may be debuting on a $60,000 EV, we already know it's headed for more mainstream platforms. Based on my experience with it, that can only be a good thing.

This post has been updated with new information from Google and Polestar about the Android Automotive experience, resolving a few of our lingering questions. Previous Next
Get the latest tips & apps for your Smartphone