If you’re a fan of The Big Easy, you’re in for a treat with this murder mystery set in the French Quarter & the Garden District. True Blue Detective by Vito Zuppardo 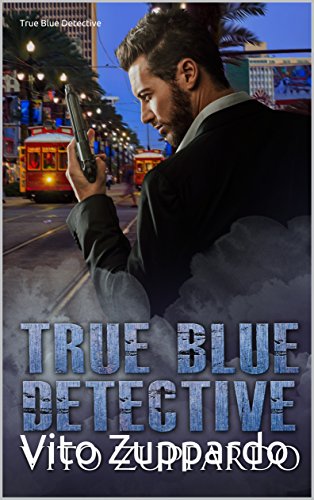 – Learn More
Text-to-Speech and Lending: Enabled
Enjoy Vito Zuppardo’s Books? Tell us Why and Win a Free Book!
Don’t have a Kindle? Get yours here.
Here’s the set-up:

A housewife is the target of a dreadful well-organized killing. Could they have killed the wrong woman? The police think so—

If you love New Orleans, you’ll love where the author takes you in this Thriller Novel that surely will be a best seller. The exciting French Quarter, Garden District, and even the Audubon Zoo

Zack Nelson believes his daughter-in-law was the actual target but her friend Jennifer was in the wrong place at the wrong time and took the bullet.

Zack’s world starts to crumble when a gang member he helped put behind bars gets released from prison early. A month later his daughter-in-law is shot by an intruder and later dies in the hospital.

Zack moves to Riverside Inn, an upscale adult community and his baggage followed him when two of his friends die under questionable circumstances. His years of solving crimes and bringing people to justice forced him to explore into a case the police said had no merit to investigate

Zack meets friends at Riverside and even finds love after all these years when he thought it would never be possible. His love affair with the second woman he ever loved becomes complicated—she is the next target on Doctor Ross’s list of organ donors.

Mario DeLuca is an ambitious young New Orleans Police Detective. His way of solving crimes may not have been by the book, but it was effective. Zack, an old school, retired detective helped Mario solve a cold case homicide. Suspicions from the cold case tie in with what Zack had suspected for years. His wife did not die of a heart attack. Joan Nelson at the time of her death was under the care of DR. WALTER ROSS. Recently arrested for trafficking human organs that he sold to the highest bidder on the black market.

Unsettled by the connection of deaths and the similarities that tie to Dr. Ross and his black market organ business, Mario realizes this may become his most controversial case ever.

The post <p style="text-align:center;font-weight:bold;"> If you’re a fan of The Big Easy, you’re in for a treat with this murder mystery set in the French Quarter & the Garden District. <br /><em>True Blue Detective </em>by Vito Zuppardo</p> appeared first on Kindle Fire on Kindle Nation Daily.