If a young man is desperate, is that an excuse for illegal behavior?The Diary of a College Rebel by Richard Mason

The Diary of a College Rebel 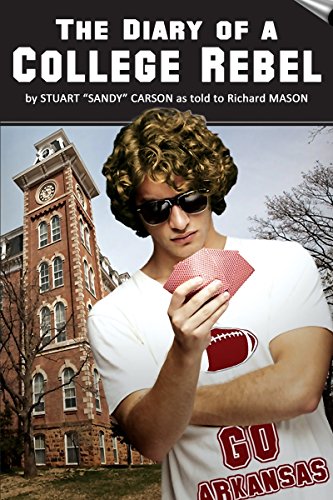 “Yeah, I guess I should have written this book under a pen name, or maybe just have moved to Texas when it came out. My God, I can’t believe some of the crap I pulled during those four short years. But, hey, nobody’s perfect, and if all those goodie-two-shoes who will stick up their noses when they read this book, really told what they did in college, I’ll bet it would open some eyes.

My guess is, that you’ll read this book, and then start asking questions—just like my wife did. “Did you really do that?” Or “Who was Millie? Or “Did you really play poker all the way through college?” Or maybe you might wonder just where fiction ends and non-fiction begins? That’s a hell of a question, because as I wrote this book, I wrote both. Yes, parts of this book are non-fiction, but as any publisher will tell you, if there’s one sentence in the book that’s fiction, then the whole work is fiction. So, I’ll leave that one up to you. You decide if “Sandy” really was the rascal I made him out to be, or was “Sandy” a victim or maybe both. And when it comes to breaking and entering, or just ordinary cheating on a test, is there any difference in how you do it? Or, if a young man is desperate, is that an excuse for illegal behavior?

So, my recommendation is, for you the reader, to just sit back and not worry if this or that is fiction or non-fiction. Actually, it might be more fun to read, if you read this book as a non-fiction diary of a college rebel—which it could be—of course, one sentence of fiction, makes it a work of fiction.”

The post If a young man is desperate, is that an excuse for illegal behavior?
The Diary of a College Rebel by Richard Mason appeared first on Kindle Fire on Kindle Nation Daily.