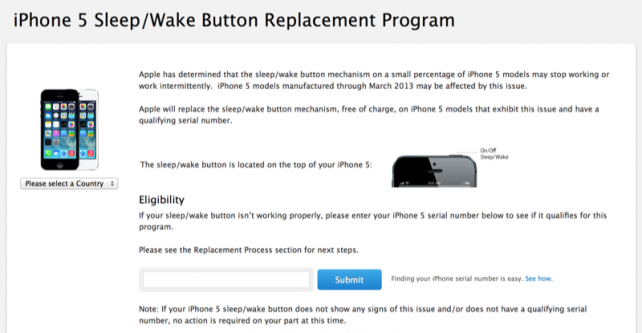 The news comes from 9to5mac, which explains:

According to internal documents furnished to Apple employees this weekend, US customers who make a Genius Bar appointment for the known sleep/wake issue can opt to trade-in their device and may receive up to $350 (or $370 in Canada) in credit, which is $80 over the current maximum for non-affected devices.

The website adds that in order to achieve the full value, “the device must be free from any issues aside from the sleep/wake defect.” This means screen issues must be repaired before the iPhone 5 handset is traded in to Apple.

Apple isn’t planning on publicising this deal, either. Instead, Apple Retail Store employees have been told to only disclose information concerning the offer to customers when asked about the option of upgrading to an iPhone 5s or iPhone 5c. “This policy is presumably in place so customers dont get the feeling that Apple put this program into place as a way to lure iPhone 5 users to upgrade with new contracts,” 9to5mac adds.

As a reminder, Apple has launched a new Web page for its iPhone 5 repair program, and there customers can check their smartphone’s serial number to see if it’s one of the “small percentage” of devices affected by the fault. Repairs are being made by Apple free of charge, but the process takes between four to six weeks. Could you live without your iPhone for that long?

If not, the above trade-in deal could be of interest.

If Your iPhone 5 Has A Faulty Sleep Button It Could Be Worth An Extra $80 is a story by AppAdvice.com
AppAdvice - iPhone, iPad, iPod, App Reviews + News
Get the latest tips & apps for your Smartphone