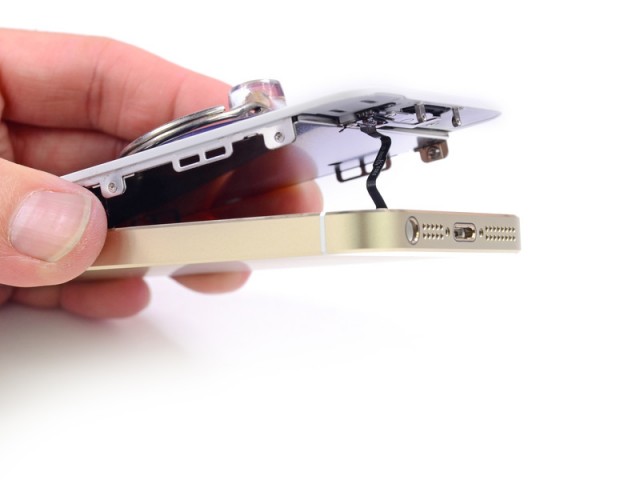 The fingerprint sensor comes with a new cable, which can be easy to break if you're not careful.
iFixit

Some advance reviews of Apple's iPhone 5S have already showed up, but as of yet few have dared to physically pull apart the new iPhone to see what makes it tick. The folks over at iFixit have gotten their hands on one of those rare gold iPhones you're all trying to buy, sacrificing it in the name of Knowledge.

What iFixit discovered was a mix of old and new, much in keeping with the new-stuff-inside, similar-stuff-outside approach that Apple usually takes with its "S" phones. The 4-inch 1136×640 display is identical to last year's (excepting the normal variance you can get from phone-to-phone depending on where Apple sourced the panel) and like the iPhone 5, it integrates the glass layer, the capacitive touch layer, and the LCD itself into a single piece to reduce thickness. The dual-band 802.11n Wi-Fi module and its Broadcom BCM4334 chipset are also near-identical to last year's model. 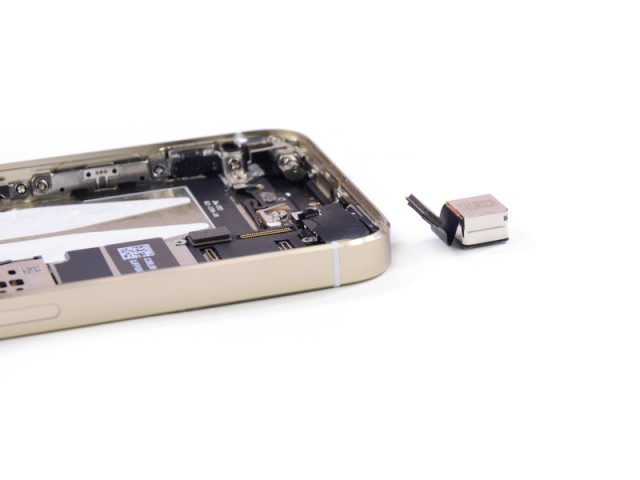 Other, small upgrades abound once you remove the device's screen. Its battery capacity has been increased to 1560mAh, up from 1440mAh in the iPhone 5 and roughly in line with FCC documents that made the rounds last week. This larger battery should provide a marginal bump in runtime over the iPhone 5, though some of its increased capacity may be eaten up by the slightly-larger A7 chip. The Qualcomm MDM9615M LTE modem is exactly the same as last year, but an upgraded Qualcomm WTR1605L LTE transceiver chip will support more LTE bands than the RTR8600 chip in the iPhone 5. It's worth noting that the MDM9615M doesn't support LTE Advanced speeds, a standard which isn't in wide use now but may be by the time 5S buyers' contracts are up in two years. An upgraded iSight camera module from Sony is also included, and it's accompanied by the new dual-LED flash.