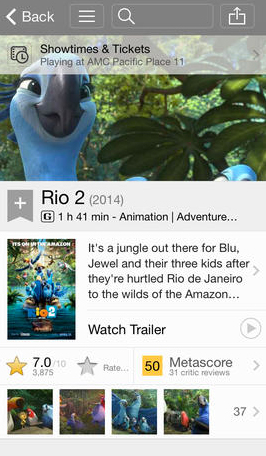 The official app of the Amazon-owned IMDb service has just received a very nice update.

First up, users can now quickly and easily see when a title is available through the Amazon Prime Instant Video streaming service. And if you have the app installed on your iOS device, a simple tap will begin playback.

Television watchers in the United States can now use the apps listings to see when and where they can watch their favorite program.

Finally, for a movie coming out this week, or any other day in the future, fans can get showtimes directly from the title page.

A universal app designed for the iPhone/iPod touch and iPad/iPad mini, IMDb can be downloaded now in the App Store for free. With version 4.0, which arrived back in December, the app offers an iOS 7 friendly design.

Amazon made a big splash today when it announced a licensing agreement with HBO. Starting in May, Amazon Prime members will have unlimited streaming access to a number of classic series like The Sopranos, The Wire, Deadwood, and more.

Early seasons of current hits like Girls, The Newsroom, and Veep should also arrive on the service sometime during the multi-year deal.

The video will be available to members of the popular Prime service. Earlier this year, Amazon raised the yearly price to $99. For the membership fee, buyers also receive free two-day shipping for items ordered from the online retailer.