An Impossible War. An Explosive Magic. An Inescapable Destiny… and a 5-star 4-in-1 BOXED SET ALERT! Ondine Quartet Collection: Vol. 1 by Emma Raveling 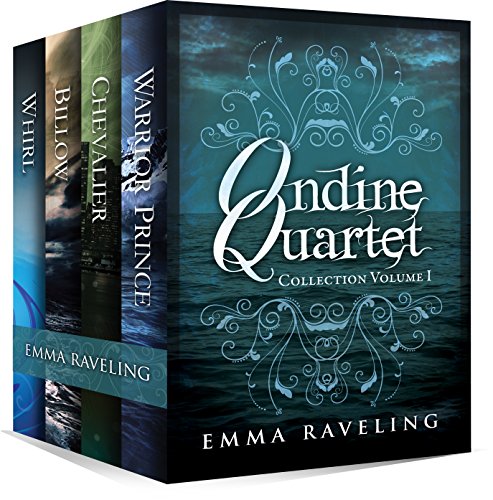 4.7 stars – 10 Reviews
Kindle Price: 99 cents
On Sale! Everyday price:
Text-to-Speech and Lending: Enabled
Don’t have a Kindle? Get yours here.
Here’s the set-up:
An Impossible War. An Explosive Magic. An Inescapable Destiny.
– The World of Water Elementals –
A bundle of the first four works in the mature YA urban fantasy/paranormal series, Ondine Quartet. This collection contains:

– Warrior Prince (#2.5: a collection of scenes in Tristan POV)

** This series is recommended for older teens and mature readers**

Outspoken and independent, Kendra Irisavie has always played by her own rules.

She’s an ondine, a water elemental gifted with the powerful magic of Empath Virtue and trained to be a fighter. Pursued by Aquidae demons, she and her mother remain Rogue, hiding among humans to avoid becoming casualties in an ancient war.

Everything changes when violence erupts on Kendra’s seventeenth birthday. A dark stranger appears, promising answers to her mysterious past and stirring unexpected feelings in her fiercely guarded heart.

But as Kendra uncovers the truth about her heritage and future, she realizes just how deep the lies and deception run.

Now, in the face of unthinkable odds, she will need all her wits, skills, and magic to fulfill an extraordinary prophecy.

A sweeping urban fantasy series, the Ondine Quartet follows a young woman’s exhilarating journey for survival, love, and hope as she fights for her place in a world where she doesn’t belong.

“An action-packed, emotional rollercoaster ride of a read that will grip you from the very beginning and leave you begging for more.” – Paromantasy

“Exhilarating, suspenseful and thrilling…so many engaging scenes that leave you sitting on the edge of your seat and by the end of this book you’ll only be wanting more!”- Book Passion for Life

An Impossible War. An Explosive Magic. An Inescapable Destiny… and a 5-star 4-in-1 BOXED SET ALERT! Ondine Quartet Collection: Vol. 1 by Emma Raveling