An interesting romance centered around a mega-popular movie star and a member of the paparazzi. Harder Than Steel (Super Stars Book 1) by Jane Galaxy 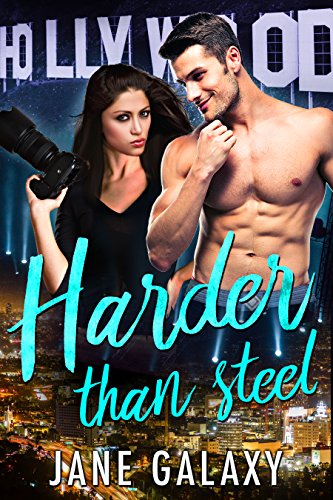 A SEXY MOVIE STAR, A DESPERATE PHOTOGRAPHER, AND THE SECRETS THAT COULD DESTROY THEM BOTH…

Henry Jackson (Jax) Butler is Hollywood’s hottest bad boy. Ever since the release of STEEL KNIGHT, his first movie in the world-famous Protectorate superhero film franchise, he’s been able to land any girl he wants, even his co-star’s sexy model girlfriend. But this dream job comes with downsides—like feeling completely typecast and unable to move on artistically. That and the paparazzi. The evil, privacy-invading scum who tail his every step, smearing his name and reputation just for having some innocent fun. And one pap in particular has become his worst enemy…

Vanessa Reyes would give anything to be a real photographer, shooting for investigative journalism pieces that could make a difference in the world. But with her sister’s medical bills to pay, she’s stuck tailing Hollywood’s latest bad boy Jax Butler through New York, cashing in on every one of his plentiful hookups. She might not love her job, but she feels no remorse about exposing Jax for the heartless heartbreaker he is. Why shouldn’t she cash in on his dirty dealing?

But when Jax is ordered to clean up his public image, he can think of no better media contact to approach for help than his rival. Keep your friends close and your enemies… Well, you know the rest. As for Vanessa, her boss has ordered her to find him newer, dirtier dirt on Jax. What better way to worm her way into his good graces than by accepting his offer to write some fluff pieces about him?

Yet the more time the two enemies spend in one another’s company, the more they begin to see different sides to one another. Is Jax really the ruthless hookup artist he seems? Is Vanessa just another shady pap out for his blood? Or do they both have another, deeper self? One that only shines when they’re together…