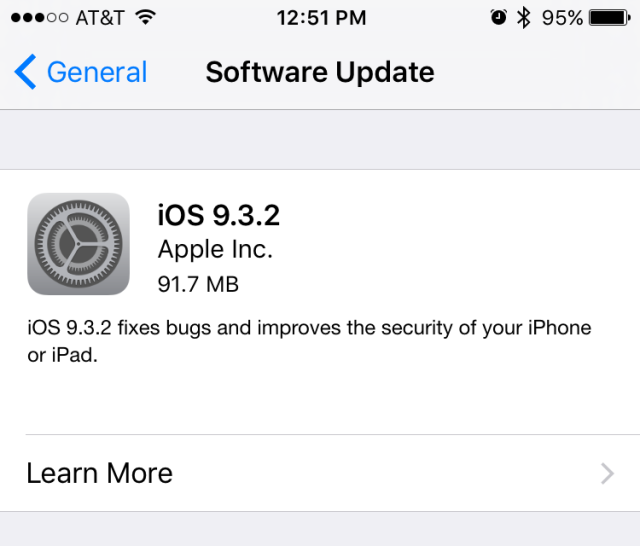 Apple has just released iOS 9.3.2, a minor update to iOS 9 that fixes a handful of minor bugs. The most significant fix is related to the iPhone SE, which "could experience audio quality issues" when paired to Bluetooth headsets. The full release notes are below:

All of these fixes are for minor edge cases that affect only small fractions of the iOS userbase—major development on iOS 9 stopped with iOS 9.3, at which point Apple presumably shifted its focus to the new version of iOS that we'll see at WWDC next month. The update is available for all devices that support iOS 9, including the iPhone 4S and newer; iPad 2 and newer; all iPad Minis and iPad Pros; and the fifth- and sixth-generation iPod Touches.

Apple also released minor updates for its other iOS-derived platforms, the Apple Watch and the fourth-generation Apple TV. The release notes for watchOS 2.2.1 and tvOS 9.2.1 don't name any specific fixes, but if you want the latest "bug fixes and security updates," you can download both of them now.