iPhone XR vs. Google Pixel 3: Which is Better? 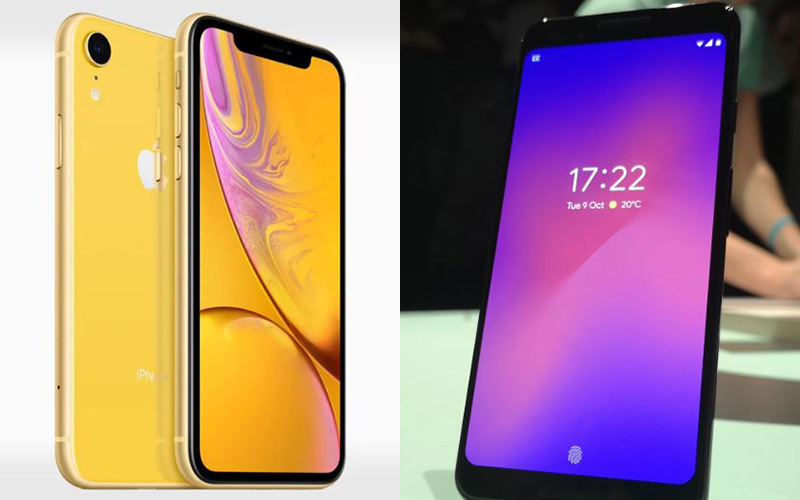 The iPhone XR and Google Pixel 3 are coming. When they arrive, we will be in the midst of a new era of “budget” smartphones.

No, they’re not the cheapest phones on the market. However, they are phones that promise to be just as good as their competition (or siblings) for s smaller price tag. That’s an exciting promise. It’s also one that we’ve heard before. Yet, both these phones are preparing to stake their claim as arguably the best on the market.

So which is better? That’s a debate that’s going to be resolved sometime in the next few months. However, we think there’s enough information out there now to say which phone is more worthy of your money.

The iPhone XR is one of Apple’s strangest iPhones yet. It is not quite as powerful as the XS and XS Max, yet it’s certainly an improved version of the iPhone X. From what we know, it seems to be Apple’s “budget” iPhone.

Yet, that doesn’t mean that it’s a lesser phone. While it’s not nearly as loaded and powerful as the XS/XS Max, it’s an extremely capable phone that boasts exciting features. The fact that it’s the cheapest new iPhone on the market may bet it’s most obvious selling point, but don’t take that to mean that it’s not a desirable phone.

For all intents and purposes, the iPhone XR is an iPhone X that Apple feels is more suitable for the modern market. Since we love the iPhone X (we called it the second best iPhone ever) that’s a pretty appealing proposition.

Google’s Pixel line is quickly shaping up to be the most viable iPhone contender out there. There’s no shortage of great smartphones at the moment, but the Pixel and iPhone are in a class of their own.

The Pixel 3 is shaping up to be Google’s most interesting smartphone yet. It is, in many ways, a pretty shameless copy of the iPhone X line. That’s not really a bad thing, though. After all, the X line is generally pretty great.

For as much as the Pixel 3 emulates, it also manages to innovate. The question now is whether or not the Pixel 3 does enough to justify making the jump to Android for the chance to own one.

Apple made no sacrifices when it came to the iPhone XR’s camera. It is actually the exact same front-facing camera found in the iPhone XS.

Specifically, that means that you get

The difference comes when you look at the rear camera. Unlike the XS and XS Max, the XR only has one 12 MP camera. It also only allows for 5x digital zoom as opposed to 10x. Otherwise, the cameras are pretty similar. That’s good to hear considering that the XS camera is pretty great. It might just be the best on the market.

The significant difference between the two phone’s zooms is certainly noticeable, but it’s really not that big of a deal unless you zoom a lot.

Overall, we know the iPhone XR’s camera will be great.

There’s a good chance that Pixel 3’s camera will be the best smartphone camera we’ve seen yet.

The Pixel 3’s front-facing 8 MP camera is certainly better than the XR’s. The Pixel 3’s 12.2 MP rear camera is also a slight improvement from a purely technical standpoint.

What really gives the Pixel an edge, though, is the phone’s software. Adjustable aperture effects, AI photo recognition, Top Shot burst photo recognition…the Pixel 3 is clearly trying to feature the best smartphone camera on the market.

Ultimately, we think the Pixel 3’s camera will due to the way Google designed so much of the phone around it. It may not be a runaway victory, but the Pixel 3 does get the nod here.

The iPhone XR’s specs are pretty impressive. It utilizes the same Apple A12 Bionic chip as the iPhone XS. In fact, its core processing power is more or less identical to the XS.

So far as “budget” iPhones go, that’s essentially unheard of. You’d expect this phone to be noticeably less impressive than the XS, but it’s not. At a glance, you might feel like you’re getting away with something when you get the XR.

However, there is one small catch. The XR has 3 GB of RAM while the XS has 4. Is that a big deal? Yes and no. You’re never going to scoff at an extra gigabyte, but the difference is only going to be noticeable to power users.

Considering that power users are likely buying the XS anyway, we can’t help but be impressed with what the XR brings to the table.

The Pixel 3’s power level is a bit of a mixed bag.

How much that matters is really a question of usage…but it doesn’t feel like Google was pushing any boundaries with their chip selections. We’re impressed they’re offering 4GB of RAM, but again, the value of that extra gig can be a matter of debate.

The Pixel 3 has enough power for its price, but we ultimately think the XR deserves the slight nod.

The iPhone XR is a successor to the iPhone X, so it’s no surprise that it’s a good looking phone.

We’re honestly over the notch controversy (it’s not nearly as cumbersome when you use it) so we like it on the XR. Besides, it allows the iPhone XR to offer a lot of screen real estate without feeling excessive.

We’re also quite impressed with the range of colors the iPhone XR comes in. Sure, you can always buy a colorful case, but the natural color selections help the iPhone XR stand out. On top of it all, you’ve got a generall sleek phone design that just stands out and looks good.

All in all, we love the iPhone X’s design and the XR is just a better take on it.

This one is tricky.

The base Pixel 3 is a different story. Some people are going to like the fact it is notch-free, but we’re not that impressed. The phone has a solid look and feel, but it also looks and feels a bit dated. Not bad by any means, but maybe not all it could be.

The Pixel 3 XL is fantastic, but so far as the Pixel 3 goes, we give the design nod to the XR.

The iPhone XR price points break down like this:

All models are cheaper than the base model of the XS, which is pretty impressive. The 128 GB option offers a particularly impressive price/storage size ratio. The $899 is a fairly good deal (if less impressive) while the $749 feels like a bit of a rip-off given how much more you get for $50.

These price points are more than fair, but it’s the $799/128GB that feels like the real value offering of the bunch.

There are a few things to digest here. First off, the Pixel 3 is outright more expensive than the XR. That’s not great…but it’s also not that bad. You have to remember that the Pixel 3 is a true next-gen phone while the XR is a middle–tier upgrade. That means that it (theoretically) offers more bang for your buck.

We’ll dive more into whether that’s the case, but the question is whether or not the 128 GB Pixel 3 is worth the extra $100. It’s a tough question to answer, but we can’t ignore that the XR offers a technically better value so far as storage goes.

The XR’s screen is the source of some controversy.

The phone’s 6.1 inch, LED 1792 x 828 display feels very dated. Believe it or not, the iPhone X offered better resolution (albeit on a smaller screen). However, the story isn’t quite that simple. Apple says the XR’s Retina technology and screen means that you won’t really notice the drop in resolution.

They’re technically right, but the fact remains that the XR can’t stream true 1080p content. That’s not a pure deal breaker…but it is disappointing. It’s one of the few ways that the XR really does feel like the “budget” iPhone.

The XR’s screen wont’ be big deal for most, but is it better than the Pixel 3’s?

Generally speaking, the resolution only makes a noticeable difference on larger screens. As such, the difference between the Pixel 3 and the XR in that respect isn’t really as big as you might think.

By the slightest of margins, we’re going with the Pixel on this one.

We love iOS 12. Seriously, check out our breakdown of everything that’s great about it.

What you really need to know about iOS 12, though, is that it aims to improve everything that makes iOS great. It succeeds in that goal as well. By focusing on the little things, Apple made iOS 12 the operating system that reminds you why Apple is what they are.

It’s a little difficult to comment on Android 9 Pie given how few people have used it, but we hear good things. Along with some interesting new features, Pie features a sweet of improvements that are designed to make the OS feel as smooth as iOS 12.

That’s nice, but iOS still feels so much more refined. Since iOS 12 is an even more refined version of iOS, it’s hard not to recommend it above most other OS. We do think Pie is trending in the right direction, but at the moment, iOS 12 is just too much to beat.

We’re waiting for concrete information on the XR’s battery, but early indications are positive.

Based on what we know, the XR is going to outlast the XS’ battery. That’s good, because the iPhone XS’ battery is pretty awful. Overall, it should offer five hours more talk time, three hours more internet use, and 2 hours more video playback than the XS.

Modern smartphone batteries being what they are, the XR’s battery life should be more than respectable.

We’re also speculating a bit regarding the Pixel 3’s battery. Most of our information is based on closed-door tests and regulatory filings.

However, it seems the Pixel 3 will have a better battery. Not only will the phone’s battery be bigger than the XR’s, but it will come with a faster charger. A faster charger is available for the XR, but you have to pay for it separately.

Considering that both phones also have accessible wireless charging, we’ve got to give the nod to the Pixel 3.

First off, there’s no clear winner in this battle. That speaks as much to what the Pixel 3 has to offer as it does to the quality of Apple’s budget offering.

However, we’re ultimately a little more impressed with the iPhone XR.

It comes down to a few factors. First off, we love iOS 12. It’s a fantastic operating system that offers one of the best user experiences. Of course, you can get iOS 12 on other devices.

What makes the XR special in that regard is its price/performance ratio. Yes, the XS and XS Max are generally better. However, the difference between the XS, XS Max, and XR really isn’t that great. The XR even pulls ahead in some areas.

It does slightly bother us that the Pixel 3’s camera is so far ahead of the XR’s. That’s hardly a minor phone feature. There are also some features the Pixel 3 offers that the next iOS needs to copy ASAP. We also love its battery life and some will love its overall design.

Still, there is a reason that iPhones are the standard, and they’re all in the iPhone XR. It’s beautiful, extremely powerful, loaded with features, and shockingly affordable.

For years, we’ve wanted Apple to take phones in this price range seriously. With the XR, they’ve done just that.

The post iPhone XR vs. Google Pixel 3: Which is Better? appeared first on The App Factor.