A new update for the Samsung Galaxy S6 is now rolling out to unlocked devices in Netherlands, which should install the June 2017 security patch. Aside from the improved device security, the update also fixes some of the device bugs and adds some performance-related improvements. While Samsung did not specify what improvements were made, users should experience better performance and smoother response from their device. As the Samsung Galaxy S6 inches closer to the third anniversary of its release, device owners should expect additional security updates from the South Korean tech giant within the next few months. However, it is likely that the device will no longer receive the next major version of the Android operating system given the track records of most of the device manufacturers. For those owning the Samsung Galaxy S6 Edge, there is no word yet on when a similar update rolls out for the said device.

The new update is quite small, pegged at ‘only’ 82.11MB, so downloading the update through mobile data connections will not greatly affect the user’s data allocation. However, it is still advisable that the device’s battery should have sufficient battery charge in order to finish the update process. If the device suddenly shuts down during the update process, owners may encounter software problems that could force the user to seek the assistance of a technician. At this point, the update is available for unlocked devices in the Netherlands but similar devices across Europe should receive the update soon. Users who do not want to wait for a notification from Samsung could download the update manually through the device’s settings.

The Samsung Galaxy S6 is one of the two flagship devices released by the South Korean tech giant back in 2015. The said device has already received two major OS updates, with the Android 7.0 Nougat update rolling out to the handset way a few months back. This handset is equipped with an Exynos 7420 chipset, which is considerably more efficient compared to the rival solution from Qualcomm. A Mali-T760 GPU is also included for the handset’s graphics processing needs. The device’s design was a radical shift from what Samsung did before, with the manufacturer eschewing removable batteries and going with a more premium-feeling glass back. 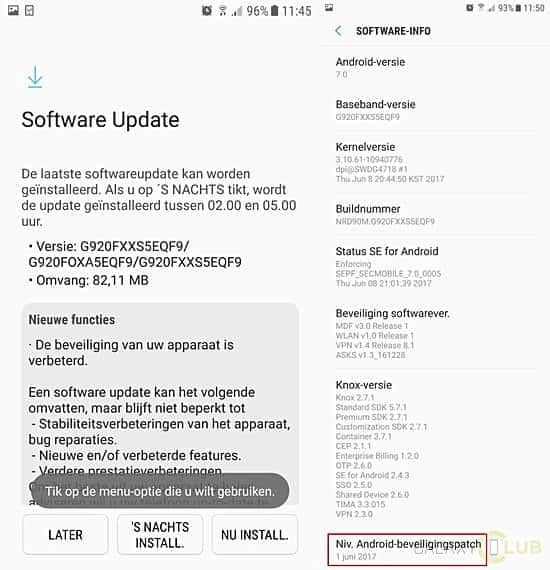