Keelan Cavanaugh is fat. That’s why the government put him in prison… This is Catch-22 for a new generation, with a distinctly tender undertone, even as it mercilessly spoofs the establishment: The Fatness by award-winning author Mark A. Rayner

by Mark A. Rayner
4.6 stars – 27 reviews
Kindle Price: $2.99
Everyday Price:
Text-to-Speech and Lending: Enabled
Enjoy Mark A. Rayner’s Books? Tell us Why and Win a Free Book!
Don’t have a Kindle? Get yours here.
Here’s the set-up:

Keelan Cavanaugh is fat. That’s why the government put him in prison.

They placed him in a Calorie Reduction Centre (CRC), where trained staff work to help him and many others slim down. Well, that was the intention, anyway. The powers that be had decided chubby citizens must either go there or lose their health care coverage.

When he meets Jacinda Williams, an activist lawyer researching this new system, Keelan is more determined than ever to slim down. But Keelan discovers losing weight is more difficult than it seems, especially when he also has to fight against a ridiculous bureaucracy and policy wonks with hidden agendas. Can he succeed, and will the CRC-crossed lovers ever sit at love’s banquet together?

From award-winning author Mark A. Rayner, The Fatness is a contemporary satire of socialism, capitalism, and the so-called “obesity epidemic”. This is Catch-22 for a new generation, with a distinctly tender undertone, even as it mercilessly spoofs the establishment.

Praise for Mark A. Rayner

“Mark A. Rayner—an all-Canadian synthesis of Douglas Adams and Ben Elton—understands that the best satire is only five degrees to the left of reality. The Fatness may not be reality (yet), but it’s too close for comfort. Luckily, it’s also funny as heck.” ~Corey Redekop, author of Shelf Monkey and Husk

“I’ve only come across a few writers who are truly funny, and Mark A. Rayner is one of them.” ~Terry Fallis, author of Best Laid Plans

“Mark A. Rayner’s characters possess substance enough, and exist in a world sufficiently vivid, to be able to revolt and liberate themselves in an exhilarating counterrevolutionary struggle.” ~Tom Bradley, author of Useful Despair as Taught to the Hemorrhaging Slave of an Obese Eunuch

“Mark A. Rayner is just a terrific storyteller and one of the most imaginative and original writers you will ever have the pleasure of reading.” ~Ian Ferguson, author of Village of the Small Houses

“Mark A. Rayner is an author with a fantastical sense of humor and a dangerous imagination.” ~The Next Best Book Club 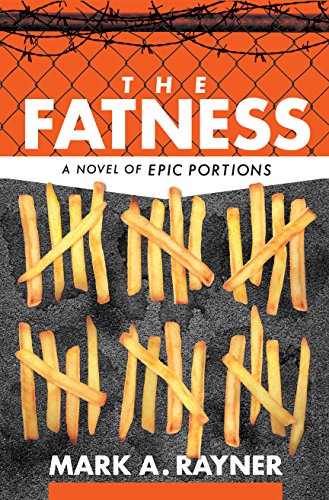 The post <p style="text-align:center;font-weight:bold;">Keelan Cavanaugh is fat. That’s why the government put him in prison…<br /> This is Catch-22 for a new generation, with a distinctly tender undertone, even as it mercilessly spoofs the establishment: <em>The Fatness</em> by award-winning author Mark A. Rayner</p> appeared first on Kindle Fire on Kindle Nation Daily.