Kids on Fire: A Free Excerpt From Of Painted Ponies and Dandelion Dreams

We’re happy to share this post from our sister site, Kids Corner @ Kindle Nation Daily, where you can find all things Kindle for kids and teens every day!

Last week we announced that JC Camij’s Of Painted Ponies and Dandelion Dreams is our Kids Corner Book of the Week and the sponsor of our student reviews and of thousands of great bargains in the Kids Book category:

Now we’re back to offer a free Kids Corner excerpt, and if you aren’t among those who have downloaded this one already, you’re in for a treat!

Of Painted Ponies and Dandelion Dreams 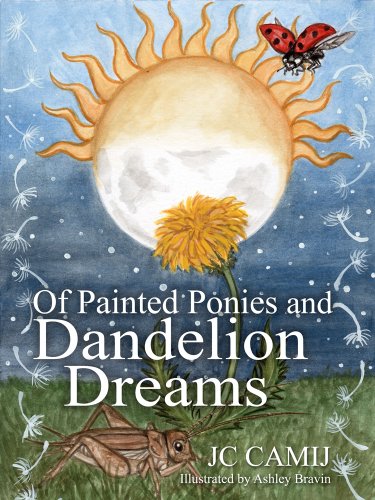 Don’t have a Kindle? Get yours here.

Here’s the set-up:
Did you love bedtime stories as a child? Then get your copy of, Of Painted Ponies and Dandelion Dreams, now. This collection of nine beautifully illustrated poems will make magical bedtime reading for the whole family.

“Yet there lies, in ticking time, The hidden riddle of the rhyme, Waiting to be found and spoken, And so magic re-awoken.”

Books are portals, gateways where time and space cease to exist, and the words they contain cast spells transporting us into forgotten worlds of wonder. Take a moment now to reconnect with the childlike innocence that animates each and every one of us.

And here, for your reading pleasure, is a poem featured in “Of Painted Ponies and Dandelion Dreams”:

Once upon a rhyme,
In a place long-lost in time,
Lay a land full of wonder,
Formed by candy-colored thunder.

And there breathed a lad,
Puffy air of purple plaid,
Whose every word was magical,
Mysteric and fantastical.

He played there and he climbed,
Silver hills made of chimes,
Running in the ringing rain,
He rhymed the runes of Rexadain.

The words that he spoke,
Made of cotton and of smoke,
Rose up to the silky sky,
Spawning clouds of dragonflies.

The lad lived each day,
In this most magic way,
‘Til the day that he misspoke,
The word ‘lone’ of dark red smoke.

He did not like this word lone,
A word heavy, like a stone,
A word that would not rise,
Would not float into the skies.

The lad, now feeling lone,
Felt feelings quite unknown,
Now his days in Rexadain,
Never were again the same.

Soon he spoke the word sad,
Followed by the word bad,
Then bothered, and bewildered,
Vexing words that spun him inward.

Dizzying his mind,
In a manner most unkind,
He became disenchanted,
Became unhappily transplanted.

Laying down to weep,
He fell into deepened sleep,
To the place where worlds are made,
Words are spells and wishes weighed.

There he dreamed the word other,
And so dreamed himself a brother,
Someone he could always stay with,
Always talk to, always play with.

But this vision had a catch,
“Keep your magic under latch,”
Said the voice of this other,
“Stay and dream, stay and slumber.”

Tossing and turning, dreamily drifting, shifting,
Searching for a missing spangled sun, he spun,
Longing for the misted morn of a fading, foreign land.

So he had to make a choice,
“Lose the magic”, said the voice,
“Leave behind fair Rexadain,
Stay with me and dream again.”

And you know what the lad did,
By free choice his magic hid,
He woke no more in Rexadain,
Where rainbows sing in glowing rain.

He left behind fair Rexadain,
Never gave a thought again,
To runic tales and valleys deep,
Left it all behind in sleep.

Yet there lies, in ticking time,
The hidden riddle of the rhyme,
Waiting to be found and spoken,
And so magic re-awoken.

Click here to get the book: JC Camij’s Of Painted Ponies and Dandelion Dreams>>