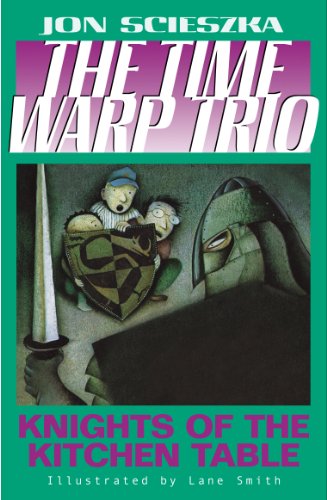 In the wonderfully funny and entertaining Time Warp Trio series of illustrated chapter books for early readers, by Jon Scieszka and Lane Smith, Joe and two of his friends use a magical book for time travel.

In each adventure they travel to a different historical time period, meeting heroes of classic literature and experiencing life as it was at that time. It’s a great, painless way to introduce young readers to history and classic literature.

Narrator Joe is given a magic book (”The Book”) that transports him and two friends to King Arthur’s Britain, where they find themselves confronted by a fearsome Black Knight–who’s easy to defeat with some quick dodging when he’s in mid-charge. Then Lancelot, Gawain, et al. happen by and take the boys for heroes–a reputation they sustain by tricking the loathsome giant who’s menacing the castle into fighting the terrible dragon (Smaug) that has also just turned up.

Scieszka unobtrusively slips in several classic references and defines some chivalric jargon by having the boys comically paraphrase it; there is some daring juvenile humor on the subject of the giant’s various atrocious smells, and the contrast between the boys’ breezy manner and the knights’ pseudo-formality is also good for several laughs.
- Kirkus Reviews 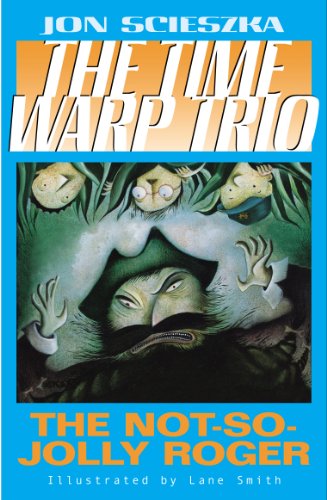 The boys now find themselves on a desert island.

Blackbeard comes to bury treasure–and his two helpers; he catches the boys and takes them to the pirate ship (Israel Hands is among those aboard). There’s some suspense, more slapstick, and the singing of some fine chanteys before the boys are again saved by The Book. 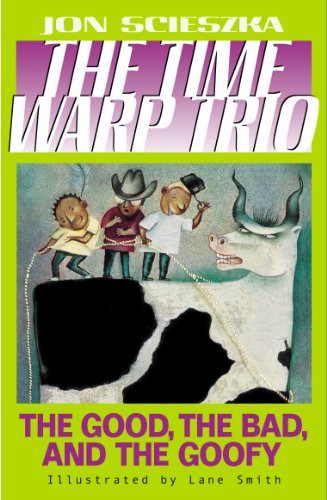 The new book brings back memories of the classic “Spaghetti Western,” The Good, the Bad, and the Ugly. There are similarities beyond the titles. Scieszka’s book also includes an ample dose of humor, a lively pace, and on-target dialogue. A spell, accidentally cast, transports Joe, Fred, and Sam back to the Chisholm Trail of 1868.

They narrowly escape two stampedes, a flash flood, being scalped by Cheyenne braves, and a charge of the Seventh Cavalry lead by Lieutenant (soon to be General) Custer. Sam’s knowledge, “magic . . . picked up in a book,” and a Time Freezer spell save the day and return the trio to the present. Smith’s typically zany pencil and charcoal drawings heighten the drama and enhance the wacky mood of the story.
- School Library Journal 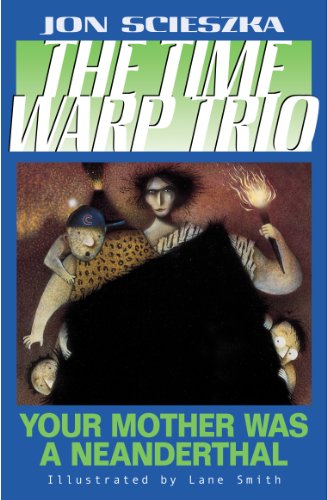 Joe, Sam, and Fred find themselves “absolutely naked” at the outset of this prehistoric adventure. While fans of the previous three books won’t be surprised at this somewhat outrageous beginning, it’s sure to catch the attention of first-timers.

Scieszka’s humorous, zippy dialogue and word play, combined with Stone Age icons (a saber-toothed cat; a woolly mammoth; cave paintings; and an interesting and hilarious collection of cavemen, women, and girls), are sure to appeal to readers. References to classic time-travel books-Edward Eager’s Half Magic, Madeline L’Engle’s A Wrinkle in Time, and H.G.Wells’s The Time Machine- are bound to spur many readers on to other new adventures. This fast-paced, fun story is perfectly matched by Smith’s wacky black-and-white illustrations.

Click here to browse the full Time Warp Trio series – there are 16 in all, but note that only volumes 1 – 10 are available in Kindle format.