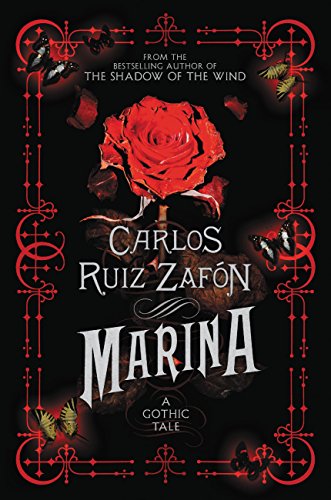 In this country, novelist Carlos Ruiz Zafon is best known for his sweeping and magical Cemetery of Forgotten Books series, but in his homeland of Spain he’s also well known as the author of this much-loved ghost story that’s appropriate for kids in grades 8 and up.

“We all have a secret buried under lock and key in the attic of our soul. This is mine.”

When Fifteen-year-old Oscar Drai suddenly vanishes from his boarding school in Barcelona, no one knows his whereabouts for seven days and seven nights.

His story begins when he meets the strange Marina while he’s exploring an old quarter of the city. She leads Oscar to a cemetery, where they watch a macabre ritual that occurs on the last Sunday of each month. At exactly ten o’clock in the morning, a woman shrouded in a black velvet cloak descends from her carriage to place a single rose on an unmarked grave.

When Oscar and Marina decide to follow her, they begin a journey that transports them to a forgotten postwar Barcelona–a world of aristocrats and actresses, inventors and tycoons–an reveals a dark secret that lies waiting in the mysterious labyrinth beneath the city streets.

Carlos Ruiz Zafon’s haunting Marina has long been a cult classic in Spain and is now an international bestseller.

School Library Journal says:
“From the very first page, this beautifully written work of historical fiction is impossible to put down. With elements of romance, mystery, and horror, none of them overwhelming the other, this complex volume that hints at Mary Shelley’s Frankenstein manages to weave together three separate stories for a cohesive and eerie result.”