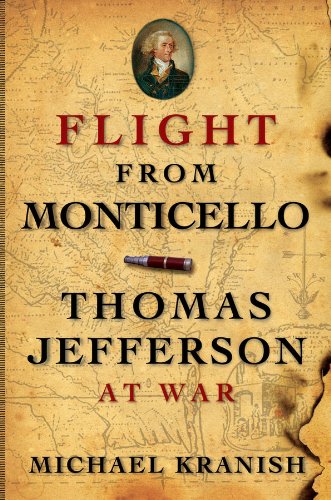 When Thomas Jefferson wrote his epitaph, he listed as his accomplishments his authorship of the Declaration of Independence and the Virginia statute of religious freedom, and his founding of the University of Virginia. He did not mention his presidency or that he was second governor of the state of Virginia, in the most trying hours of the Revolution. Dumas Malone, author of the epic six-volume biography, wrote that the events of this time explain Jefferson’s “character as a man of action in a serious emergency.” Joseph Ellis, author of American Sphinx, focuses on other parts of Jefferson’s life but wrote that his actions as governor “toughened him on the inside.” It is this period, when Jefferson was literally tested under fire, that Michael Kranish illuminates in Flight from Monticello.

Filled with vivid, precisely observed scenes, this book is a sweeping narrative of clashing armies–of spies, intrigue, desperate moments, and harrowing battles. The story opens with the first murmurs of resistance to Britain, as the colonies struggled under an onerous tax burden and colonial leaders–including Jefferson–fomented opposition to British rule. Kranish captures the tumultuous outbreak of war, the local politics behind Jefferson’s actions in the Continental Congress (and his famous Declaration), and his rise to the governorship. Jefferson’s life-long belief in the corrupting influence of a powerful executive led him to advocate for a weak governorship, one that lacked the necessary powers to raise an army. Thus, Virginia was woefully unprepared for the invading British troops who sailed up the James under the direction of a recently turned Benedict Arnold. Facing rag-tag resistance, the British force took the colony with very little trouble. The legislature fled the capital, and Jefferson himself narrowly eluded capture twice.

Kranish describes Jefferson’s many stumbles as he struggled to respond to the invasion, and along the way, the author paints an intimate portrait of Jefferson, illuminating his quiet conversations, his family turmoil, and his private hours at Monticello. “Jefferson’s record was both remarkable and unsatisfactory, filled with contradictions,” writes Kranish. As a revolutionary leader who felt he was unqualified to conduct a war, Jefferson never resolved those contradictions–but, as Kranish shows, he did learn lessons during those dark hours that served him all his life. 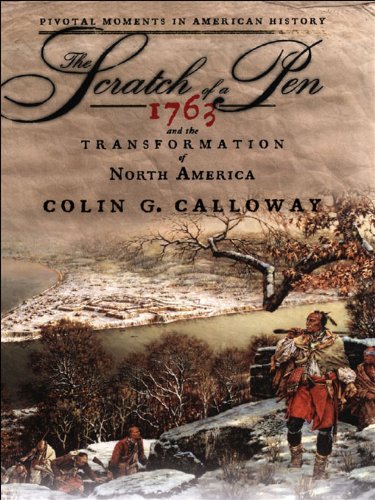 The Scratch of a Pen: 1763 and the Transformation of North America – Pivotal Moments in American History (4.5/5 stars, currently priced at $2.99)

In this superb volume in Oxford’s acclaimed Pivotal Moments series, Colin Calloway reveals how the Treaty of Paris of 1763 had a profound effect on American history, setting in motion a cascade of unexpected consequences, as Indians and Europeans, settlers and frontiersmen, all struggled to adapt to new boundaries, new alignments, and new relationships.

Britain now possessed a vast American empire stretching from Canada to the Florida Keys, yet the crushing costs of maintaining it would push its colonies toward rebellion. White settlers, free to pour into the West, clashed as never before with Indian tribes struggling to defend their way of life. In the Northwest, Pontiac’s War brought racial conflict to its bitterest level so far. Whole ethnic groups migrated, sometimes across the continent: it was 1763 that saw many exiled settlers from Acadia in French Canada move again to Louisiana, where they would become Cajuns. Calloway unfurls this panoramic canvas with vibrant narrative skill, peopling his tale with memorable characters such as William Johnson, the Irish baronet who moved between Indian campfires and British barracks; Pontiac, the charismatic Ottawa chieftain; and James Murray, Britains first governor in Quebec, who fought to protect the religious rights of his French Catholic subjects.

Most Americans know the significance of the Declaration of Independence or the Emancipation Proclamation, but not the Treaty of Paris. Yet 1763 was a year that shaped our history just as decisively as 1776 or 1862. This captivating book shows why.

Winner of the Society of Colonial Wars Book Award for 2006 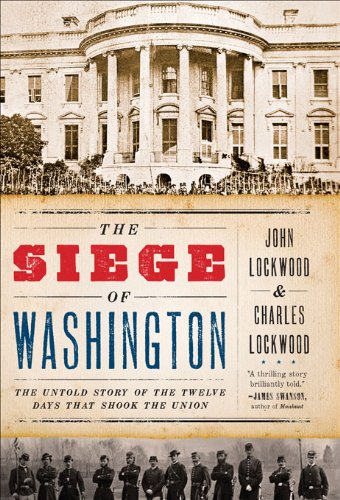 The Siege of Washington: The Untold Story of the Twelve Days That Shook the Union (4.5/5 stars, currently priced at $2.99)

On April 14, 1861, following the surrender of Fort Sumter, Washington was “put into the condition of a siege,” declared Abraham Lincoln. Located sixty miles south of the Mason-Dixon Line, the nation’s capital was surrounded by the slave states of Maryland and Virginia. With no fortifications and only a handful of trained soldiers, Washington was an ideal target for the Confederacy. The South echoed with cries of “On to Washington!” and Jefferson Davis’s wife sent out cards inviting her friends to a reception at the White House on May 1.

Lincoln issued an emergency proclamation on April 15, calling for 75,000 troops to suppress the rebellion and protect the capital. One question now transfixed the nation: whose forces would reach Washington first-Northern defenders or Southern attackers?

For 12 days, the city’s fate hung in the balance. Washington was entirely isolated from the North-without trains, telegraph, or mail. Sandbags were stacked around major landmarks, and the unfinished Capitol was transformed into a barracks, with volunteer troops camping out in the House and Senate chambers. Meanwhile, Maryland secessionists blocked the passage of Union reinforcements trying to reach Washington, and a rumored force of 20,000 Confederate soldiers lay in wait just across the Potomac River.

Drawing on firsthand accounts, The Siege of Washington tells this story from the perspective of leading officials, residents trapped inside the city, Confederates plotting to seize it, and Union troops racing to save it, capturing with brilliance and immediacy the precarious first days of the Civil War. 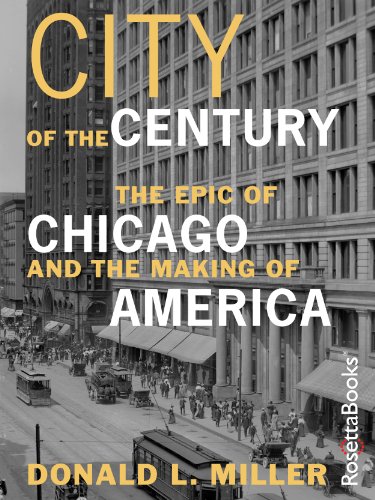 City of the Century: The Epic of Chicago and the Making of America (4.5/5 stars, currently priced at $1.99)

From its turbulent beginnings to its current status as one of the world’s most dynamic cities, City of the Century tells the story of Chicago—and the story of America, writ small. From its many natural disasters, including the Great Fire of 1871 and several cholera epidemics to its winner-take-all politics, dynamic business empires, breathtaking architecture, its diverse cultures, and its diverse population of writers, journalists, and artists, Chicago’s story is violent, inspiring, passionate, and fascinating from the first page to the last.

The winner of the prestigious Great Lakes Book Award, given to the year’s most outstanding books highlighting the American heartland, City of the Century has received consistent rave reviews and was made into a six-hour film airing on PBS’s American Experience series. Written with energetic prose and exacting detail, it brings Chicago’s history to vivid life. 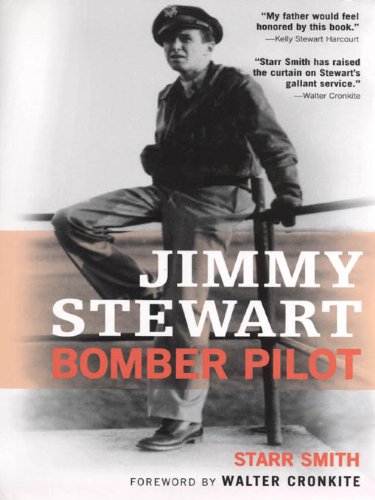 Of all the celebrities who served their country during World War II -and they were legion -Jimmy Stewart was unique. On December 7th, when the attack on Pearl Harbor woke so many others to the reality of war, Stewart was already in uniform – as a private on guard duty south of San Francisco at the Army Air Corps Moffet Field. Seeing war on the horizon, Jimmy Stewart, at the height of his fame after Mr. Smith Goes to Washington and his Oscar-winning turn in The Phadelphia Story in 1940, had enlisted several months earlier.

Jimmy Stewart, Bomber Pilot chronicles his long journey to become a bomber pilot in combat. Author Starr Smith, the intelligence officer assigned to the movie star, recounts how Stewart’s first battles were with the Air Corps high command, who insisted on keeping the naturally talented pilot out of harm’s way as an instructor pilot for B-17 Flying Fortresses and B-24 Liberators. By 1944, however, Stewart managed to get assigned to a Liberator squadron that was deploying to England to join the mighty Eighth Air Force. Once in the thick of it, he rose to command his own squadron and flew twenty combat missions, including one to Berlin.
“My father would feel honored by this book.” —Kelly Stewart Harcourt, daughter of Jimmy Stewart

“We would have made Jimmy a group commander [equivalent to an army regiment] if the war had lasted another month.” – General Jimmy Doolittle.

“An excellent biography of a distinguished airman and fine human being.” – Roger Freeman, author of The Mighty Eighth: A History of the U.S. 8th Air Force.

Tech Tip of the Week: I Stopped Liking On Facebook: An Update