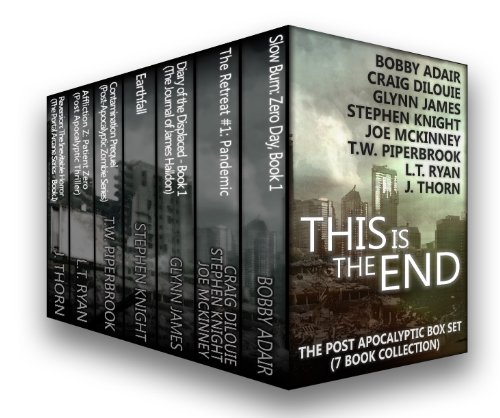 Note that these 99 cent price tags are current as of this writing, but since we can’t say how long they’ll last, be sure to grab the deals you like right away.

Do you love post-apocalyptic stories? This is the End will keep you reading for days. Get this collection now. It includes 7 novels from 8 of today’s best-selling writers of dark fantasy.

* This is the End: The Post-Apocalyptic Box Set 7 Book Collection contains scenes of graphic violence that are intended for adults and may be offensive to sensitive readers. Some titles in the anthology are the first book in a series, and others are standalone novels.

This is the End includes:

~The Retreat #1: Pandemic by Craig DiLouie with Stephen Knight and Joe McKinney (4.5 stars on 41 reviews)

~Reversion: The Inevitable Horror (The Portal Arcane Series – Book I) by J. Thorn (3.9 stars on 33 reviews) 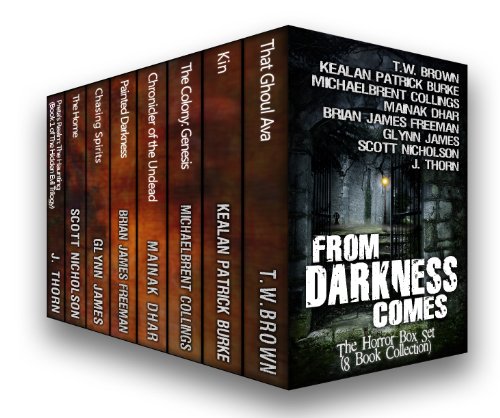 Do you love horror? From Darkness Comes will keep you reading for days. Get this collection now. It includes 8 novels from 8 of today’s best-selling writers of horror.

*From Darkness Comes: The Horror Box Set – 8 Book Collection contains scenes of graphic violence that are intended for adults and may be offensive to sensitive readers. Some titles in the anthology are the first book in a series, and others are standalone novels (review average and count accurate as of February 28th, 2014).

~The Colony: Genesis by Michaelbrent Collings (4.3 stars on 56 reviews)

~Chronicler of the Undead by Mainak Dhar (4.4 stars on 26 reviews) 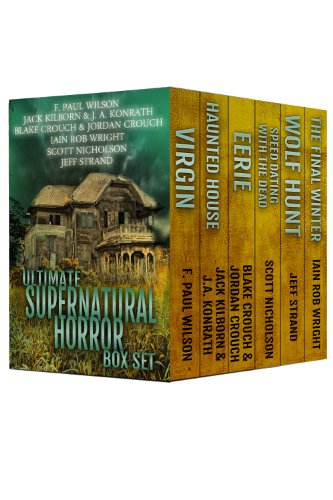 A box set of six supernatural, paranormal, and horror thrillers from international bestselling authors. More than 455,000 words of fiction, including the complete text of:

VIRGIN by F. Paul Wilson– She was hidden in the desert…to rest in peace. They shouldn’t have disturbed her.

SPEED DATING WITH THE DEAD by Scott Nicholson– Ghost hunters at a paranormal conference stir up demons.

THE FINAL WINTER by Iain Rob Wright– The snow was just the start…of the end. 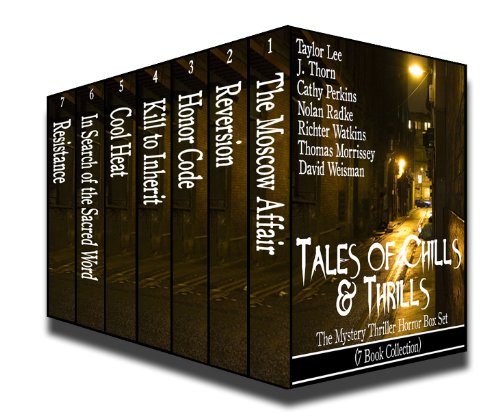 Prepare for the ultimate wild ride, whether you’re looking for ghostly or sexy detectives, family and military dramas, mind-twisting space opera, or a fast-paced, edge-of-your-seat, crime-thriller, there’s a sizzling suspense, dramatic mystery, or a shattering dark fantasy waiting inside.

THE MOSCOW AFFAIR by Taylor Lee : A dangerously elegant man and a beautiful feisty young woman, take on the evils of the international sex trade while exploring a passionate world of their own.

REVERSION: THE INEVITABLE HORROR by J Thorn: In a forest littered with caution tape and artifacts of the deceased, Samuel must outrun the ominous cloud eating away at reality. As the dying world collapses upon itself, he has to find a way to escape the Reversion

KILL TO INHERIT by Nolan Radke: Will a second murder help the ghost detective unlock the mystery behind his own?

COOL HEAT by Richter Watkins: She was the woman they couldn’t kill and he couldn’t resist.

IN SEARCH OF THE SACRED WORD by Thomas Morrissey: Jeremy Storyteller died and came back. But he didn’t come back alone. 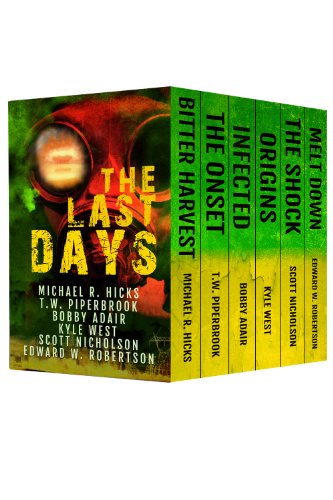 More than 450,000 words of thrilling post-apocalyptic fiction from six bestselling authors, all in one low-priced box set. Includes the complete text of:

Bitter Harvest (Season of the Harvest #2) by Michael R. Hicks–While investigating the grisly murder of a fellow agent, FBI agent Jack Dawson discovers the dark secret behind the creation of genetically modified organisms, bringing a terrifying new meaning to the old saying that you are what you eat…

Infected (Slow Burn #2) by Bobby Adair- In a late Texas summer with a virus burning through an unprepared population, an over-educated underachiever fights for his life against the atavistic brutality of the contagion’s survivors.

Origins (The Wasteland Chronicles #2) by Kyle West- 2060: the meteor Ragnarok has turned the world into a wasteland, and now a horrific virus is infecting the world – will Alex and his friends survive long enough to thwart the next apocalypse?

The Shock (After #1) by Scott Nicholson- A massive solar storm wipes out the technological infrastructure and kills billions, and then the survivors discover that some among them have…changed.

The Onset (Contamination #1) by T.W. Piperbrook- A band of survivors struggles to outlast an infection that has consumed the American southwest

Melt Down (Breakers #2) by Edward W. Robertson- Humanity faces not one apocalypse, but two: first a lethal pandemic, then a war against those who made the virus.