The House of Good Intentions 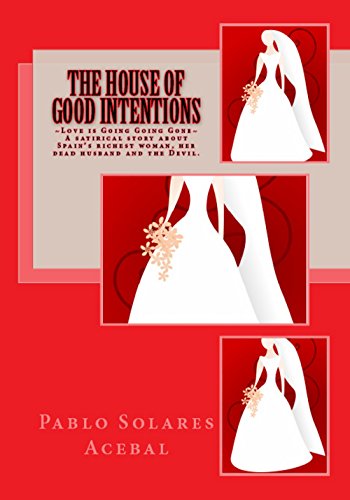 Kindle Price: 99 cents
Or FREE with

In the beginning, the beautiful Isolina believes she is marrying the man of her dreams, Eusebio. Isolina is Spain’s richest woman, but she is also a woman in love and holds many romantic notions. On her wedding day she thinks her handsome groom is also in love with her and she never suspects he is marrying her with any other motive in mind.

But what is his motive for marrying her? As the mesmerizing story unfolds we realize maybe Eusebio does infact, care deeply for Isolina. However, as time passes she feels unsure of him and soon obtains a lover. Eusebio tries to hide his many personalities; when he finds out she has taken a lover, he is blind with jealousy and his evil, power hunger, revengeful personality surfaces. His need to hurt, manipulate and dominate now rules his consciousness, Isolina lives in fear of Eusebio, the husband she once thought she loved. Gradually she feels him invading her soul, and understands he is more than human, more than evil, but she knows not how to stop it.

Katy Rosas, the old matriarch knows what is beneath the surface and suspects, Eusebio is the devil!

However, Eusebio conveniently dies or, some believe he is murdered? Whichever it is, it is not enough to contain his cruel smoldering evil. Even from his grave in the garden under the mimosa tree, he controls and inhabits the occupants of ‘Rosalinda’…a house many believe, is bewitched.