What if you could summon a tech-support person to pop up in seconds in a live video on your digital device? And what if that person could draw on the screen or even take over the device to solve a problem?

Well, starting Oct. 18, you can do just that with the latest in Amazon’s Kindle Fire tablet line, the Kindle Fire HDX. This help system, called the Mayday button, is the most unusual feature of what is otherwise a mainly evolutionary new model of the company’s color tablets.

A better help system isn’t exactly the prime reason to buy a new tablet. After all, tablets are supposed to be simple and easy to figure out. But Mayday is consistent with Amazon’s long, well-earned reputation for customer support. 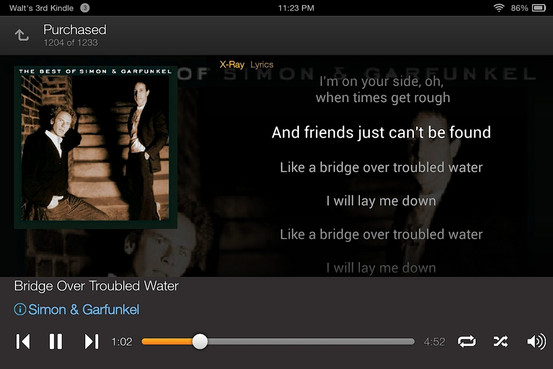 X-Ray for Music shows lyrics synchronized to the song playing on the Kindle Fire HDX.

I’ve been testing the Fire HDX, and it’s a good, basic color tablet. This latest model, which starts at $229 for the 7-inch-screen version I used, is a definite improvement on last year’s Fire HD, which started at $199 for the 7-inch version. (There’s also a costlier, larger HDX version, with an 8.9-inch screen.)

Like earlier Fire models, it’s best thought of as a hardware gateway to buying digital content from Amazon. The base model blasts ads at you from the home screen, but you can buy one without ads for $15 more.

However, the 7-inch Fire HDX, like its predecessor, still isn’t as versatile or full-featured as rival tablets, like Apple’s iPad Mini or Google’s Nexus 7. It offers only a fraction of the third-party apps available from the Apple or Google app stores. Among the missing are such popular offerings as Instagram, Dropbox, Google Maps, YouTube and Netflix (Amazon says a Netflix app is coming soon).

Unlike the Mini or the Nexus, the 7-inch Fire HDX lacks a rear camera, so you can’t easily show your surroundings to others during a video chat (the bigger model has a rear camera).

And the HDX has no equivalent to its rivals’ voice-controlled, artificial intelligence features, Apple’s Siri and Google Now.

And the Fire HDX turned in a so-so battery life of 7½ hours that, while better than the 6 hours of the latest Nexus 7, paled before the iPad Mini’s 10 hours and 27 minutes. (I used my standard test where I set the screen to 75% brightness, keep the Wi-Fi on and play videos stored on the tablet until the battery dies.)

So, what makes the new Kindle HDX better than the last model? Well, it has a gorgeous, high-resolution screen that displays 323 pixels per inch, the same as the latest, $229 Nexus 7, but much higher than the $329 iPad Mini’s 163 ppi (though the Mini’s screen is significantly larger, at 7.9 inches). The screen also was a bit more readable in sunlight than the iPad’s. The Fire HDX has a faster processor that has eliminated the latency I encountered when testing last year’s model.

The Fire HDX has a new operating system and some cool new features. The home screen still has a carousel to show recently used apps, songs, books and videos, but below that there’s now a standard grid of icons for favorite apps and you can hide the carousel if you find it distracting. There’s also a new sidebar for quickly switching among running apps. This appears when you swipe from the edge of the screen.

Perhaps my favorite new feature is called X-Ray for Music, which shows synchronized lyrics to the song you’re playing. So far, it’s only available on “tens of thousands” of Amazon’s 25 million songs, starting with the newest and most popular. But I found scattered cases in songs going back to the 1970s and enjoyed using it.

The Fire HDX is slimmer and lighter than last year’s model, and has tapered edges. But there’s a downside to this design. Because the tapered edges are narrow, the volume and power buttons have been moved to the back of the tablet. I found them clumsy and slow to use.

Like its predecessors, the Fire HDX is technically an Android tablet that buries Android so it’s invisible. The HDX lacks any hint of Google’s Android interface, the standard Google apps that come on most Android devices and the standard Android app store, Google Play. Instead it uses an Amazon operating system now called Fire OS 3.0.

Amazon has its own app store for the Fire HDX and it contains 85,000 apps, compared with roughly a million each in the Google and Apple app stores.

The Mayday help button worked mostly as advertised, though I got little useful help, partly because Amazon is training a large number of support people and few have much experience yet with the new HDX.

When you click the Mayday button, which appears in a settings bar that swipes down from the top of the screen, a small, movable video window pops up. You can see the support person, but he or she can only hear you. To better explain things, the person can draw on your screen. And if you allow it, he or she can take over the Fire to perform tasks.

The support people appeared in 10 seconds or less and were unfailingly friendly. But they often just went poking around the device, looking for a menu item or icon that would accomplish what I couldn’t figure out. In two cases, they put me on pause, to do some quick research. Amazon says their knowledge will grow as they get more familiar with the new hardware and software.

In one case, a Mayday agent I had previously talked with followed up on an earlier question concerning how to get an app that wasn’t in the Amazon app store for the HDX. She sent me an email explaining how to do a 10-step workaround.

Mayday isn’t entirely private. You have to give agents your name, email and address, the call is recorded and customer-service management can see reports on individual calls. But overall, it’s a great idea.

If you mainly want a tablet for consuming content and regularly use Amazon content, the new Kindle Fire HDX is a good deal.