“Dan’s work is awesome, baby, with a capital A!” –Dick Vitale 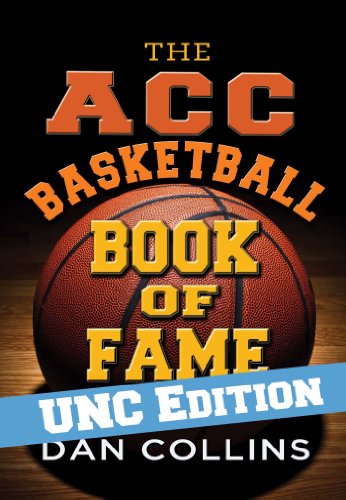 Kindle Price: $2.99
Text-to-Speech and Lending: Enabled
Don’t have a Kindle? Get yours here.
Here’s the set-up:
In putting together The ACC Basketball Book of Fame by Dan Collins, we noticed that the book included a large number of UNC players. We thought Carolina fans might enjoy a separate e-book that only featured the former Tar Heel players. If reading this selection piques your interest, you can read about all 79 players in the complete book, which is available as a hardcover printed book or an e-book.
Reviews

“In The ACC Basketball Book of Fame, Dan Collins gives his perspective on the many greats that have made the ACC one of the top conferences. Dan s experience in covering ACC games over the years allows him to go in-depth about the greats that have worn an ACC uniform, such as Michael Jordan, Christian Laettner, and Ralph Sampson. Dan’s work is awesome, baby, with a capital A!” –Dick Vitale

“The what-ifs of history are daunting to consider. What if Albert Einstein had been obsessed with ACC basketball rather than the space-time continuum? Might he have come up with a genius equation for ranking the greatest ACC basketball players in the league s 60-year history? Instead, that honor has fallen to Country Dan Collins of Spudtowne, North Carolina. Though he kept a proper distance from a physics lab during his college days, he has nonetheless invented a brilliant formula for basketball fame suitable to a physicist who has spent his years studying the trajectories of three pointers. As the readers of this stimulating book will soon discover, Dan Collins should be as legendary as the players about whom he writes.” –Will Blythe, author of To Hate Like This Is to Be Happy Forever

“There aren’t many of us left those writers and broadcasters who still remember and enjoyed the early days of ACC basketball. Country Dan Collins, the veteran sportswriter for the Winston-Salem Journal for the last 35 years, is one of the few still at it. Every avid conference fan will want to read and discuss The ACC Basketball Book of Fame. Dan believes players should be judged against who they played, and he developed an Awards Points system to indicate just how good players were and what they meant to their teams and the conference at large. He also includes those players who were good but didn t garner enough points to merit his Hall of Fame.” –Woody Durham, “Voice of the Tar Heels”, 1971 2011

“My Take on Wake,” Dan Collins’s blog for the Winston-Salem Journal, has attracted 17 million hits. Collins is the author of Tales from the Wake Forest Hardwood. He lives in Winston-Salem, North Carolina.