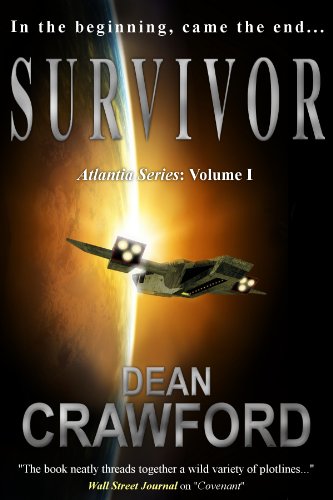 5.0 stars – 1 Reviews
Kindle Price: 99 cents
Text-to-Speech and Lending: Enabled
Don’t have a Kindle? Get yours here.
Here’s the set-up:

A civilisation destroyed. A species doomed to wander the cosmos. A lone survivor feared by all, her voice silenced and her face veiled behind a metal mask.

The Atlantia is all that remains of humanity: a former fleet frigate turned prison-ship now hunted by a terrifying force and haunted by escaped convicts threatening the survival of her beleaguered crew and civilians.

Trapped in orbit around a foreign world, damaged and low on supplies, the crew of the Atlantia are forced to make a deal with the devil to forge an alliance of murderous convicts, exhausted soldiers and terrified civilians in a last-ditch attempt to confront the technological horror that has consumed mankind.
Humanity’s last stand begins here, and only one woman stands between annihilation and our future…

Survivor is the first volume of the Atlantia series from internationally best-selling author Dean Crawford, is DRM free and is 104,000 words in length.

“The fossilized remains of a 7,000-year-old creature dug from the sands of the Negev Desert in Israel become the bones of contention in Dean Crawford’s fast-paced debut thriller… The book neatly threads together a wild variety of plotlines.” – Wall Street Journal

“The action is frenetic, in the vein of Matthew Reilly’s Scarecrow series. Crawford is an able storyteller who smoothly orchestrates the plot’s twists and turns… ” – Kirkus Reviews

Dean Crawford is the author of the internationally published series of novels featuring Ethan Warner, a former United States Marine now employed by a government agency tasked with investigating unusual scientific phenomena. The novels have been Sunday Times paperback best-sellers and have gained the interest of major Hollywood production studios.