Kindle or Echo? Which way will Amazon go? 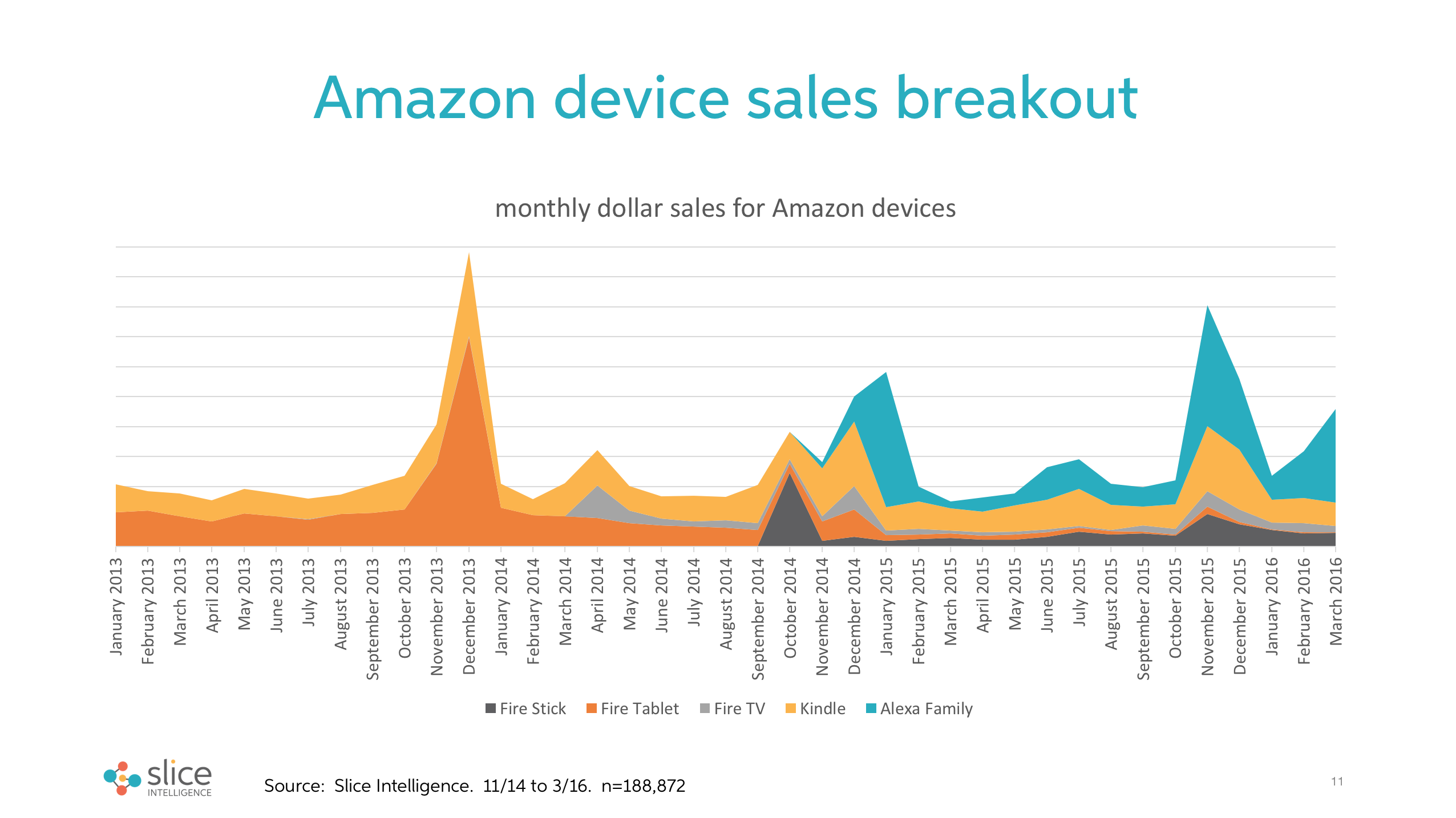 Slice Intelligence, which claims to be “the only direct measurement of all digital commerce activity and customer loyalty,” has just shared some fascinating data on sales of Amazon devices. And what the data says, according to Slice Intelligence, is that “Echo devices have, in a short period of time, overtaken all Amazon hardware devices in sales dollar volume. From the launch of the Echo in November 2014 through March 2016 (which includes the first month of Dot and Tap sales), the Echo family accounts for 26 percent of Amazon device unit sales and 41 percent of dollar sales, beating the Kindle by seven points.”

All this assumes that Slice Intelligence’s data is reliable. The firm claims to deliver “impeccable, near real-time data,” based on “a methodology developed at Stanford that measures and catalogs all online purchases made by consumers who use the popular Slice app.” Amazon itself certainly isn’t releasing sales numbers on its own devices, so for now perhaps we have to go with Slice. And it’s not like these conclusions are far out of line with other reports.

Slice Intelligence tracks Amazon’s device sales back to 2013 and points out: “Prior to March 2014, this ecosystem was entirely composed of reading devices (the Kindle and Fire tablets).  By holiday 2015, a clear troika had emerged with Echo, Kindle, and Fire TV gaining footholds into tens of millions of households. Thinking about this in terms of media consumption devices, Amazon now has the leading e-reader, the hottest audio listening devices on the market, and a growing base of Amazon-powered Fire TV devices that turn our TVs into conduits for Amazon video content.”

Should ebook fans be worried? Meaning: Will the breakout success of Alexa and Echo draw Amazon away from the ebook market towards increasing focus on home automation? Well, the launch of the Kindle Oasis hardly suggests that. After all, the Alexa devices have been around since early 2015, plenty of time for their sales numbers to show up on Slice Intelligence’s graphs. If Amazon was going to tilt away from ebooks, would it really launch a premium ebook reader?

Rather, I’d suggest that these figures show Amazon’s increasing confidence in, and ambitions for, its entire hardware/online ecosystem. Let’s face it, despite Slice Intelligence’s claim, no one buys Alexa devices because they’re the “hottest audio listening devices on the market” – they buy them because they’re cutting-edge home automation front-ends. Amazon Dash Buttons are much the same principle, only much smaller. And again, we’re looking at hardware that accesses Amazon’s e-commerce platform, whether it’s content and digital media or FMCG.

In fact, I think we’ll see more and more diverse devices, options, and access channels for Kindle – and Alexa, and all Amazon’s hardware fronts. Ebook readers will only benefit – the Kindle Oasis being just one more instance. Until the anti-trust regulators move in and decide to pull down the whole three-ring circus, maybe …

The post Kindle or Echo? Which way will Amazon go? appeared first on TeleRead News: E-books, publishing, tech and beyond.