Some may be tempted to dismiss Knack for its cartoonish appearance and seeming simplicity, but don't be fooled. These would-be flaws are Knack's strengths--offering instantly immersive gameplay, polished visuals, and a social element that lets you customize your experience.

Knack's world runs on an energy source called relics, which are excavated from the ground and used to power all of the motors in society. As you navigate as Knack in this 10-hour adventure, you encounter different motors, which you can destroy to collect relics from. As you collect, Knack accumulates special moves and his size alters as you play--from three feet tall at his smallest to three stories tall at his largest.

The first chunk of the demo opens on a dirt path and continues into a city street, eventually fading to a new area: a grandiose mansion. There are lasers blocking my path, but as small, "crystal" Knack, I am able to pass through with ease. The game provides on screen cues, pointing out that you can press triangle to transform back into full-size Knack, but even without these cues, the controls are noticeably intuitive. There is an immediate sense that you know exactly how to navigate: transform into full-size Knack to take out enemies wielding rocket launchers and laser swords and punch out blocked paths, transform back to small Knack to enter small vents. There are nice little touches to detail during combat, like relics falling off of Knack upon taking damage.

According to assistant producer Nicolo Accordino, the team kept the controls "purposefully simple," a philosophy that carries throughout other elements of the design. Three visually distinctive areas were showcased in the demo: a cityscape by the shining blue seaside, a grand mansion with rich, red carpeting, an ice cavern with sparkling blue crystal; all of the various elements of each demonstrating the simple, harmonious look and feel of Knack. "[The team] did a lot of research into the type of game that makes people comfortable, and the type of environments that suck you into the world," Accordino notes, adding that they wanted Knack to have international appeal. "We didn't want a game that looked too much like a Japanese anime [or too much] like an American comic book. We wanted something that fit for everyone." 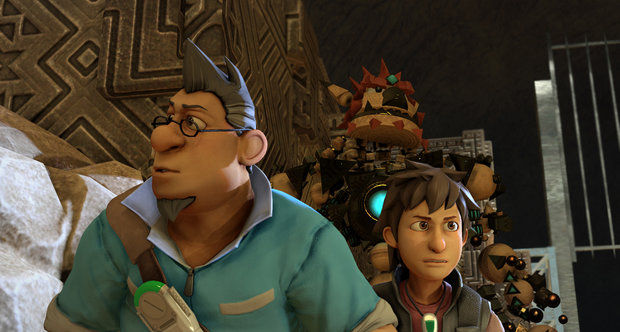 Knack aims for a look that's between anime and American comics

Scattered around the world of Knack are chests containing various gadgets, each being an additional move or attribute. Opening a chest, a screen comes up showing the gadget we picked up: a sunstone battery part, as well as a list of your friends and the gadgets they have picked up in that room. Selecting the item we found added another sunstone gauge to the upper left-hand corner of the screen, which allows you to perform more special moves.

Accordino us that the chests are the "social element" of the game, where you can choose to take your gadget or choose to take a copy of your friend's gadget, allowing you to customize your gameplay. One might be concerned that this would affect the difficulty of the game, but he assures that a "healthy challenge" is provided, and the length of the game is in no way altered by what you choose to pick up.

The demo wraps up back at in the city near the seaside with a towering Knack at his maximum size. At this point, Knack is showcasing that it's just plain fun. You can pick up cars and projectile them at helicopters overhead, knock down buildings, and take out tanks--all with the nice touch of oversized button cues.

A PS4 launch day game might choose to utilize all of the new features the system has to offer, but Knack makes a boldly conscious choice to streamline the controls, design, and social interaction to create a game that welcomes everyone to play. Managing to balance nostalgic character action game elements with fresh, new concepts, Knack holds the promise of becoming a modern platformer classic.