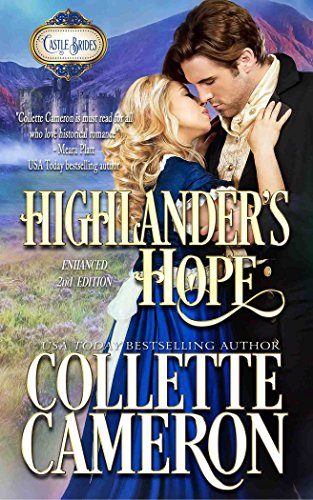 – Learn More
Text-to-Speech and Lending: Enabled
Available on Audible
Enjoy Collette Cameron’s Books? Tell us Why and Win a Free Book!
Don’t have a Kindle? Get yours here.
Here’s the set-up:

Caution: This Historical Romance contains a lord hiding a devastating secret, an intrepid heiress with no need for a husband, an interfering busybody, and a Scottish clan you’ll wish were your kin.

Though part of a series this novel can easily be read as a stand-alone.

Knowing they’d hate you, would you deceive the person you love to protect them?

She neither wanted nor needed to marry.
Yvette Stapleton has no need for a husband. Ever. Possessed of a fortune, she’s determined to forge her own future without matrimony’s confining bonds.Besides, she’s yet to meet a man who doesn’t find her wealth more alluring than her. That is, until a dangerously handsome, oddly familiar lord, rescues her off London’s docks the very day she arrives back in England. After succumbing to his kisses, and on the verge of giving him her heart, she discovers he’s been misleading her. And his deception has drawn her into treacherous international intrigue.

Even after two years, he couldn’t forget her.
Dually titled, Ewan, Viscount Sethwick and Laird McTavish of Craiglocky Keep has one last mission before resigning his position as a covert agent: to oust a War Office traitor. He’ll stop at nothing to succeed. Except exploit the woman who captured his heart months ago–after a single waltz. As peril mounts, they flee to Scotland, the only place Ewan is confident he can keep Yvette safe.However, on the journey, he’s forced to declare her his wife to protect her from certain ravishment.

Incensed upon discovering the irregular marriage is legally binding under Scottish law, Yvette is determined to have the union annulled. Ewan’s just as resolute she’ll remain his wife.

Buy this Scottish Regency for an emotional, mesmerizing romantic adventure filled with intrigue, lovable scoundrels, and gripping romance you won’t want to put down.