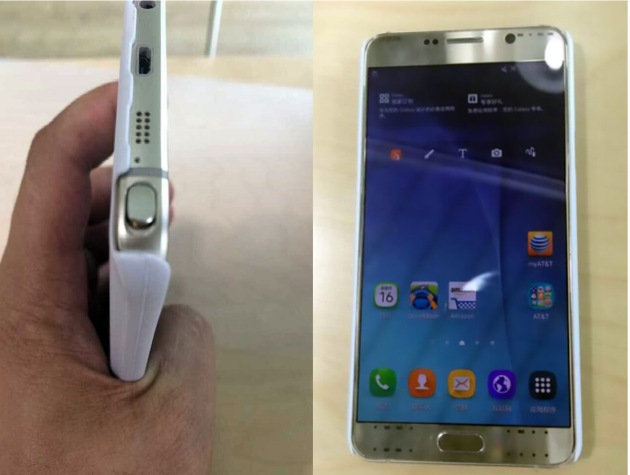 With just over two weeks to go until the rumoured August 13th announcement of the Galaxy Note 5 and Galaxy S6 Edge+ handsets, it’s only fitting that the steady stream of leaks continues. Today’s leak may give us the answer as to whether the Note 5 will sport an auto ejecting S Pen or not.

As you can see from both the images above, the S Pen would appear to be operated the same way it always has been, by inserting one’s fingernail into the lip and pulling the S Pen out of the device. While Samsung may have patented the auto ejecting S Pen, it isn’t present in this batch of leaked pictures.

Our eagle-eyed readers will have no doubt seen the AT&T apps on the Note 5’s home screen, and yes, this means that the device in view is most likely the AT&T variant, as opposed to the Verizon variant that was benchmarked the other day.

That’s the S Pen rumours sorted out (maybe), will we see leaked images giving us the definitive low-down on the MicroSD card issue before the purported August 12/13th announcement? Only time will tell, but we are allegedly getting closer to the business end of things. What other features would you like to see leaked before the official launch?