It seems Cricket Wireless customers in the market for a new prepaid option will soon have one in the form of the ZTE Blade X Max. While Cricket has yet to officially confirm the release of this smartphone on its network, a new report out of Android Authority seems to be in the know. The report provides the image below, as well as confirms a number of the main specifications that on offer. In terms of the information, it is said to come from a “reliable source.”

As for the specs, and keeping in mind that these have yet to be confirmed, the reports pegs the ZTE Blade X Max as being a large smartphone. Namely, due to the inclusion of a 6-inch display. Although in spite of its size, the resolution on offer will be resigned to 1920 x 1080. Inside, the ZTE Blade X Max is said to come packing 2GB RAM, 32GB internal storage, and is powered by a Qualcomm Snapdragon 435 SoC. Cameras are listed to include a 13-megapixel rear camera, along with a 5-megapixel front-facing camera. Additional aspects worth mentioning include the option to expand the storage via microSD (up to 64GB), a 3,400 mAh battery, Quick Charge 2.0 support, USB Type-C connectivity, and Android 7.0 (Nougat) pre-installed.

Unfortunately, no firm details have been provided on the cost or the availability of the ZTE Blade X Max. So it remains to be seen how much value will be on offer with this smartphone. Although, it is less difficult to pinpoint ahead of time where this smartphone will be positioned in the market, as the specs are pretty telling and do highly suggest this will be a low-to-mid range handset. Not to mention, ZTE also has a number of similar branded products such as the ZTE Blade Max 3 (which only this week made its way to U.S. Cellular), as well the likes of the ZTE Grand X Max 2. Both of which came to market in and around the $200 marker. It is also worth noting that a device with the model number ZT Z986 was spotted being benchmarked last month and based on the specs revealed in that post (along with those on offer here) – this is likely to be that smartphone. 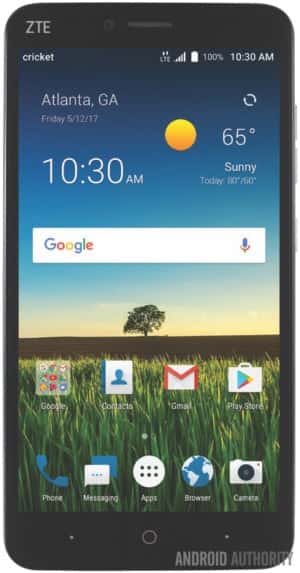