When people ask me for phone-buying advice, more often than not the question goes something like this: Apple or Samsung? And it’s not surprising to see why. The companies make two of the most popular smartphones on the market, and they also have huge advertising campaigns that get their names and products out in front of people. But that’s no reason to discount the other players in the field.

The HTC One and Motorola X are both capable Android phones worth considering, and now LG is looking to be part of the conversation with its latest flagship device, the LG G2.

The G2 is available now from AT&T, Verizon and T-Mobile, and Sprint will offer the phone next month. The price is $200 on contract, with T-Mobile selling it for $100 down and 24 equal monthly payments of $21 on its Simple Choice plan.

Though LG is no stranger to the phone business, the company’s U.S. offerings haven’t been standouts, so it’s trying some new tricks with the G2. This includes taking design risks like placing the power and volume buttons on the back of the device, and loading the phone with software designed to make navigation and multitasking easier. The G2 is also packed with some of the latest technology, such as a high-definition display and powerful processor. 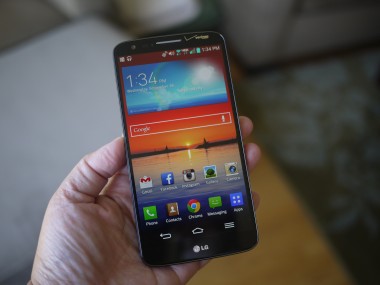 During my week of testing, I found the G2 to be a solid Android phone. The screen is beautiful, performance is smooth, and the battery life is good.

Unfortunately, some of the design decisions and software additions end up hurting the device rather than helping it. As a result, I’d recommend getting the HTC One or Samsung Galaxy S 4, both of which offer better designs and a more polished experience.

At first glance, the G2 looks like any other smartphone, sporting an all-black design (it also comes in white) and rounded corners. With a 5.2-inch touchscreen, the handset is on the larger side, measuring 5.45 inches tall by 2.79 inches wide by .35-inch thick. But I could still wrap my hand around it and slip it into the back pocket of my jeans. I just wish the back cover had some kind of texture to it, since the plastic is slippery. I much prefer the aluminum finish of the HTC One.

While the G2 might not look like much from the front, the back tells a different story. LG said it moved the power and volume buttons to the rear, just below the camera, for aesthetics and to make it more convenient for people to access these buttons on larger devices. But it drove me crazy. 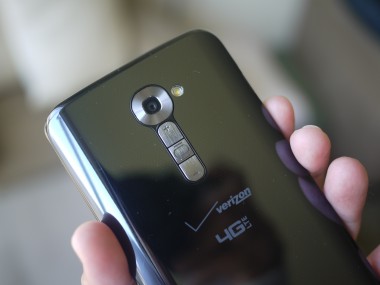 Using the volume buttons only felt natural when I was on a phone call, since I could easily access them with my index finger. Even then, it was hard to distinguish which buttons were which just by feel, especially on the Verizon model, which has smaller keys than the AT&T version.

If I had to adjust the audio any other time — for example, when listening to music or watching a video — it was awkward to have to reach around the back to do so. And the same was true every time I needed to turn on the phone.

Luckily, LG gives you an alternative way to wake the G2 from standby mode. A feature called KnockOn allows you to double-tap on the display to bring up the lock screen. When you’re done, you can use the same action to turn the phone off. It worked pretty well in my tests, but there were a couple of times when the screen didn’t register my initial taps.

The G2 ships running Android 4.2.2, which isn’t the latest version of Google’s mobile operating system, but is still just fine. The smartphone offers a couple of different features for multitasking, but neither is a great solution. 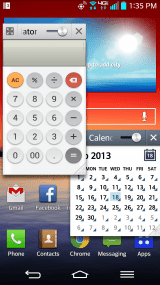 One function called QSlide Apps lets you work in two apps at once. The list of supported apps, which includes basics like calendar and email, is accessible from the notifications screen, and you can rearrange and resize the app windows. But I found that this feature really clutters the screen. Samsung’s multi-window feature is much neater, as it splits the screen in half so you can work in two apps.

Another function, called Slide Aside, allows you to keep three apps running at the same time. You can push an app aside for use later by swiping to the left with three fingers. To make it active again, you just swipe to the right and select your desired app. But the swiping gesture isn’t very comfortable, and it was also problematic when using it with Gmail, as I ended up accidentally archiving messages while trying to push it to the side. It’s easier just to hold down the Home button and switch between your active tasks that way.

While the software features might not be up to snuff, the G2’s hardware and performance shine. The 1,920 by 1,080-pixel touchscreen is vibrant and sharp, making it great for watching videos and reading text. The phone’s 13-megapixel camera also took good photos, even in low light. 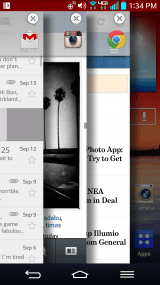 Using Qualcomm’s latest Snapdragon processor, the G2 delivered zippy performance. Apps launched with little delay, and even when playing graphics-intensive games like Max Payne, the phone was able to keep up with no problem.

I enjoyed clear-sounding voice calls and fast data speeds as I used the phone around San Francisco. Friends’ voices sounded natural, and there wasn’t any disruptive background noise. Using Verizon’s 4G LTE network, I averaged download speeds of 10.96 megabits per second, and upload speeds of 8.32Mbps.

Battery life was solid with moderate use. Most days, I used it to check email and social networks, read some Web articles and watch a couple of YouTube clips, and the G2 was able to last a little over a day. But, when used heavily, including streaming TV shows from Netflix (I’m woefully behind on “Breaking Bad”), the phone needed recharging by the end of the day.

The G2 is a very capable Android phone — it’s LG’s best effort to date. Unfortunately, the design issues and clunky software prevent it from beating out the competition.