We've just entered May, and, naturally, we're about to embark on a road that will take us to the LG G3. In the meantime, have a gander at what LG's flagship will look like, at least based on this pair of clearer, but still leaked, photos.

LG has almost all but confirmed that it will be unveiling another high-end smartphone soon. In May, in fact, according to its disclosure to some business partners and financial entities. For whatever reason, LG seems to be hastening up its releases and it seems that quite ready to take center stage, at least based on these two photos.

The G3 looks unsurprisingly similar to the G2, at least at first glance. And when looking at it from the front. Flip the phone over, however, and you see the distinct design that was leaked earlier. You still have the rear button controls, that's for sure. But the design has been evidently modified. The volume buttons that flank the power button seem to be rounder and, from this vantage point, engraved deeper than when they debuted in the G2 last year. There is also that mysterious other slot opposite the camera flash, which we still guess is some sort of sensor rather than a second LED flash. 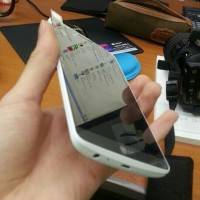 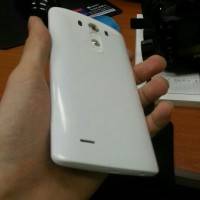 Of course, these photos can only give us a hint, if not a dream, of what the G3 would look like from the outside. It doesn't clue us in if the screen will indeed be the QHD display that might have gotten Samsung just a wee bit worried. From an outside look, we also can't determine if LG will be banking on the common Snapdragon 801 or if it will finally reveal its rumored Odin ARM chip. Despite leaked photos the LG G3 is still very much shrouded in mystery and we've got a few good weeks to try to unravel that before LG finally surprises us. Hopefully in a good way.

VIA: Blog of Mobile!!