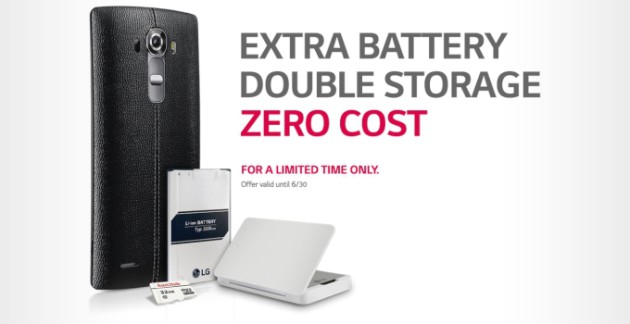 LG announced today that they are continuing the promotion where the company is giving away an extra battery and microSD card with the purchase of an LG G4 until June 30.

Keep in mind that this promotion extension is specifically for the United States. The promotion was originally set to end on June 21.

If anything, this campaign is subtle jabs at other manufactures that have gone the way of Apple, refusing to offer support for external storage and a battery replaceable by the user.

While it’s sad to see external storage slowly become extinct on flagships, the battery issue isn’t much of a problem, considering that charging technology is getting better and better.

Either way, consumers still get to reap the rewards of LG’s campaign until June 30. Are you picking up LG’s latest flagship?

Come comment on this article: LG G4 will come with an extra battery and microSD card until June 30