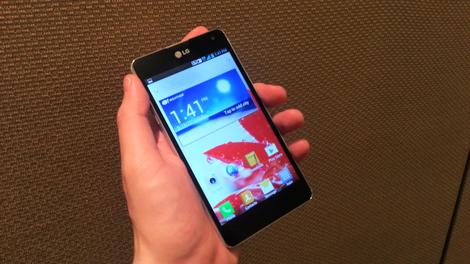 As scheduled, the LG Optimus G is now on sale through Telstra stores and resellers.

The so-called "Superphone" is available on two-year contracts for $60 per month with no extra handset repayment fees. This is as cheap as phones get on Telstra post-paid plans.

The Optimus G packs a powerful punch, featuring a quad-core 1.5GHz Qualcomm S4 Pro processor and 2GB RAM. It takes 13-megapixel photos, full HD video and is covered in Corning Gorilla Glass 2 -- on the front and the back.

Importantly for LG, the handset marks the company's first premium smartphone release in Australia for over a year. After struggling to gain a foothold in the category previously, LG spent 2012 focuses only on the pre-paid segment with its L-Series products. It is now claiming success with this strategy and as the number 2 brand in the low-end of the Australia smartphone market.

Specs-wise, the Optimus G sits on par with many of its contemporaries, but LG is hoping it can woo shoppers with a number of unique software features. Q-Slide is one example, where up to 2 extra (specifically designed) apps can be opened on top of any third screen and the transparency of these extra windows can be adjusted to show the screens below.

LG has also included an interesting camera feature which, when activated, takes photos at half-second intervals up until you fire the shutter. This allows you to review all the photos leading up to a shot, and pick the best moment to save.

If you'd like a closer look at the phone before heading into a store, check out our LG Optimus G hands on.