Sharleen is not the codename of a new tablet, instead it’s the branding applied to a killer quadrocopter controlled by an iPad and packed with a killer machine gun. Or at least so claim the guys at FPSRussia, that might as well have edited the whole thing, in an attempt to make a viral to promote the newest Call of Duty title (that’s my theory). Anyway feel free to check out the video below and image it’s real! 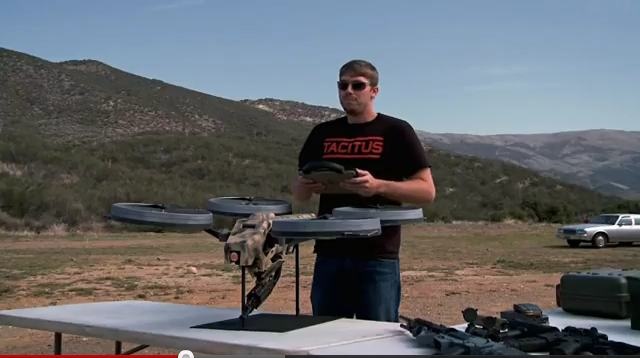 The quadrocopter is modified so that’s got better control than average models and it’s also been outfitted with a submachine gun with a 100 round magazine. Hopefully nobody draws inspiration from this and makes a killer toy like this… but there are looneys out there who would! Last time I played with a quadrocopter it was incredibly hard to control even with an iPad and this time if you get the controls wrong, you may end up shooting yourself. Also, forget about using it on the battlefield, as this guy claims, since this device could only kill a deaf target that doesn’t move.

FPSRussia is famous for CGI skills and this guy is clearly faking a pretty poor Russian accent, so once again this is not real. But it could be if some weapon making company really wanted it…