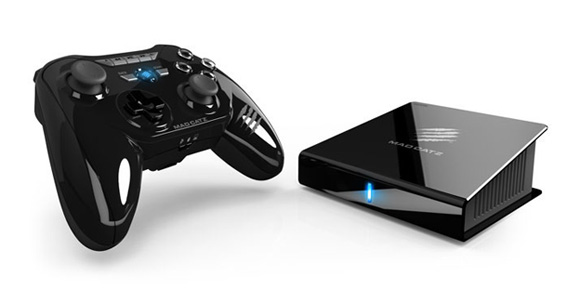 Mad Catz has revealed a new Android console hoping to rival the Kickstarter success of Ouya, launching the £220-valued M.O.J.O. on December 10th.

The company – best known for making joysticks – enters the market with a startlingly high price tag, more than twice the price of Ouya and also more expensive than the soon to be outdated PS3 and Xbox 360.

So, what is so special that’s hiding behind M.O.J.O.’s mysterious acronym?

The bulk of that cost goes towards Nvidia’s Tegra 4 processor, offering the M.O.J.O. a power and speed well beyond the capabilities of any other Android device. There’s also 16GB of storage on-board, with a micro SD slot capable of increasing that number by 128GB.

As you might expect, M.O.J.O. will also come pre-loaded with Google Play and Nvidia TegraZone, including the option to access everything you’ve bought already and download it again for free.

Despite some impressive spec, with most Android games designed around touchscreen control there’s a worry that not all titles will easily translate to a physical control.

Eurogamer’s Richard Leadbetter explains: “”The vast majority of Android titles are built around the touchscreen because that’s where the overwhelming majority of the market is. Mobile titles running at 1080p on a living room flatscreen just don’t tend to work as well.”

Being a Mad Catz product, M.O.J.O. is likely to come with a great controller – but at such a high price point you have to worry how it will compete next to the releases of next-gen gaming consoles from Microsoft and Sony.

So, what do you think? Is there a future for Android gaming consoles like M.O.J.O and Ouya? Or Android games simply better suited to smartphones and tablets?

For more information, or to pre-order the M.O.J.O from Mad Catz ahead of its December release, visit the company’s website.