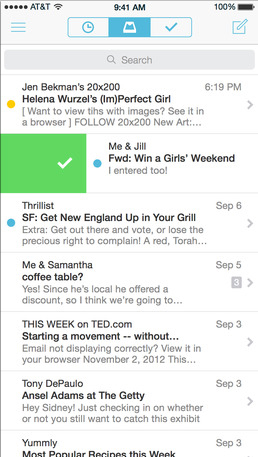 Popular third-party email app Mailbox has been updated with improvements sure to make any iPhone 6 or iPhone 6 Plus owner smile.

Version 2.3.1 is optimized for the higher-resolution screens of both handsets. That means that images and text should appear much sharper.

The other major new feature in the update is the ability for users to further customize their swipes.

A universal app designed for the iPhone/iPod touch and iPad/iPad mini, Mailbox can be downloaded now on the App Store for free.

Before todays update, the last notable version arrived back in August. Version 2.1 brought support for 19 different languages, compatibility with Apples Passbook app, and the ability to permanently delete messages from the spam and trash folders.

The Dropbox-owned company also unveiled a public beta version of Mailbox for the Mac in late summer. That program can be downloaded now directly from the Mailbox site.

For other recent app news and reviews, see: Show off your combat boat racing skills in the frantic arcade action of Pixel Boat Rush, Line up for victory in Terra Battle, a new strategy RPG from the creator of Final Fantasy, and Microtrip physics-based arcade game now optimized for iPad and iPhone 6.

Mailbox update arrives with optimization for the iPhone 6 and iPhone 6 Plus is a story by AppAdvice.com
AppAdvice - iPhone, iPad, iPod, App Reviews + News
Get the latest tips & apps for your Smartphone