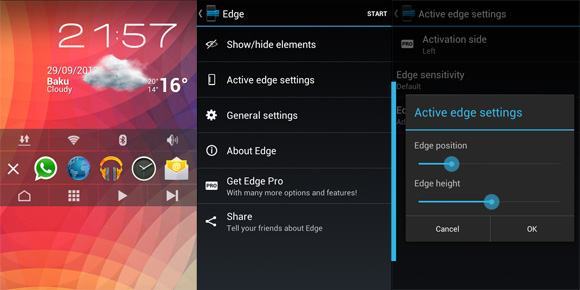 Developers are constantly looking for ways to make Android navigation simpler, but Edge: Quick Actions deserves a special mention for its subtle innovation.

While it’s already relatively painless to find the app you’re looking for using Android’s native interface, Edge makes it even simpler with a gesture area that drags in from the left side of the screen.

Simply swipe your thumb from the device’s edge – hence the name – and move along to whichever service you need, opening recent apps or settings in one satisfying action. What’s more, the app is careful not to get in your way when you’re not using it, requiring a very explicit drag from the side of the screen.

Edge is initially populated with five most recent apps in a middle row, with further settings available above and below.

All of this functionality comes in a free-to-download app, although there is a premium version available should you wish to access a few extra features. Edge Pro is available for for £1.99, allowing you to add more settings, increase the number of recent apps, change colours and the edge that the gesture area rests on. The developer also promises you’ll be able to execute smart actions in a future update.

Now, arguably navigation on Android isn’t enough of a ‘problem’ to warrant the premium features to begin with, but if you find yourself taken with Edge: Quick Actions then it might be worth upgrading to Edge Pro.