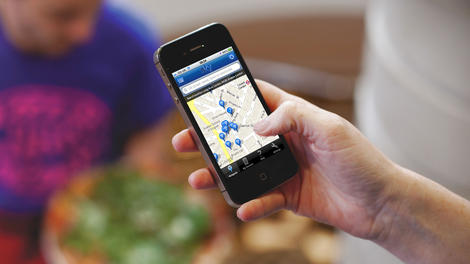 MapQuest has released its updated app for Android and its new app for the iPhone, a free navigation solution for mobile Apple users.

Since the bundling of Apple's Maps program in the iPhone's app suite, harried customers have called out for a navigation app that does more than directions. Like Android phones, these folks wanted a free GPS on their smartphones.

While there are a number of paid map apps available, some requiring fees to unlock even basic features, there hasn't been a comprehensive answer to Google Maps' mobile navigation supremacy.

The MapQuest app has its flaws (in-app ads, demanding search criteria), it's the first glimpse at free turn-by-turn directions for the iPhone - a feat worth noting.

In the simplest sense, MapQuest does exactly what it claims to be capable of. Find an area on the map, input an address, and receive voice-prompted turn-by-turn navigation from your current location to the destination.

There are some trouble spots with this system, particularly that if the destination isn't close to the area being viewed on the map, then it's likely the app will pick a closer, less exact match for the location.

A pop-up menu at the bottom features some sponsored points-of-interest as well as the requisite gas, restaurant, and hotel locators. A nice addendum to this feature is the listed gas prices for a number of stations.

For those willing to put up with the occasional incorrect search and in-app ad, MapQuest for the iPhone seems to be a solid, free answer to Apple's lackluster Maps. Since Google isn't going to lend its eclipsing maps service to the iPhone anytime soon, this may be the best option out there.