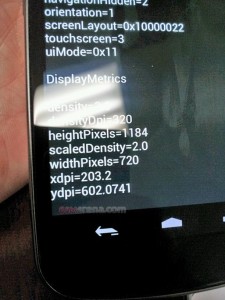 Here are are, just one week away from seeing Samsung take the stage to unveil the 'latest in Android'. Widely expected to be the official debut of Ice Cream Sandwich and a new 'Pure Google' experience device, we're hoping to see a Nexus Prime/Droid Prime/Nexus Galaxy/Galaxy Nexus announced as well.

Do you see that image to the right? According to GSMArena, this is allegedly the first shot of the much-ballyhooed phone. Of course, we don't get to see the whole phone (what's the fun in that?), only a majority of the front face.

Assuming the photo and details are legit, this is confirmation of the 1280x720 HD resolution and 4.6-inch display size.   Pixel density is shown to be 320 dpi, much better than we've seen thus far in handsets.  It's unknown whether or not this phone will use a PenTile matrix display however we're pretty sure the average user won't care one bit.

As expected all along, this phone will eschew traditional hardware buttons and offer soft keys across the bottom.  Looking at the picture we can see three buttons that somewhat resemble Honeycomb's navigation.

We hope to find out more in the next few days but, really, could wait a full week if we absolutely had to.  Samsung's Unpacked 2011 event is slated for October 11th and we can't wait!

This May or May Not be The Nexus Prime in the Wild originally appeared on AndroidGuys.